6 of the Biggest Kentucky Velvet Bucks from This Fall

A handful of killer Kentucky velvet bucks from this bowseason 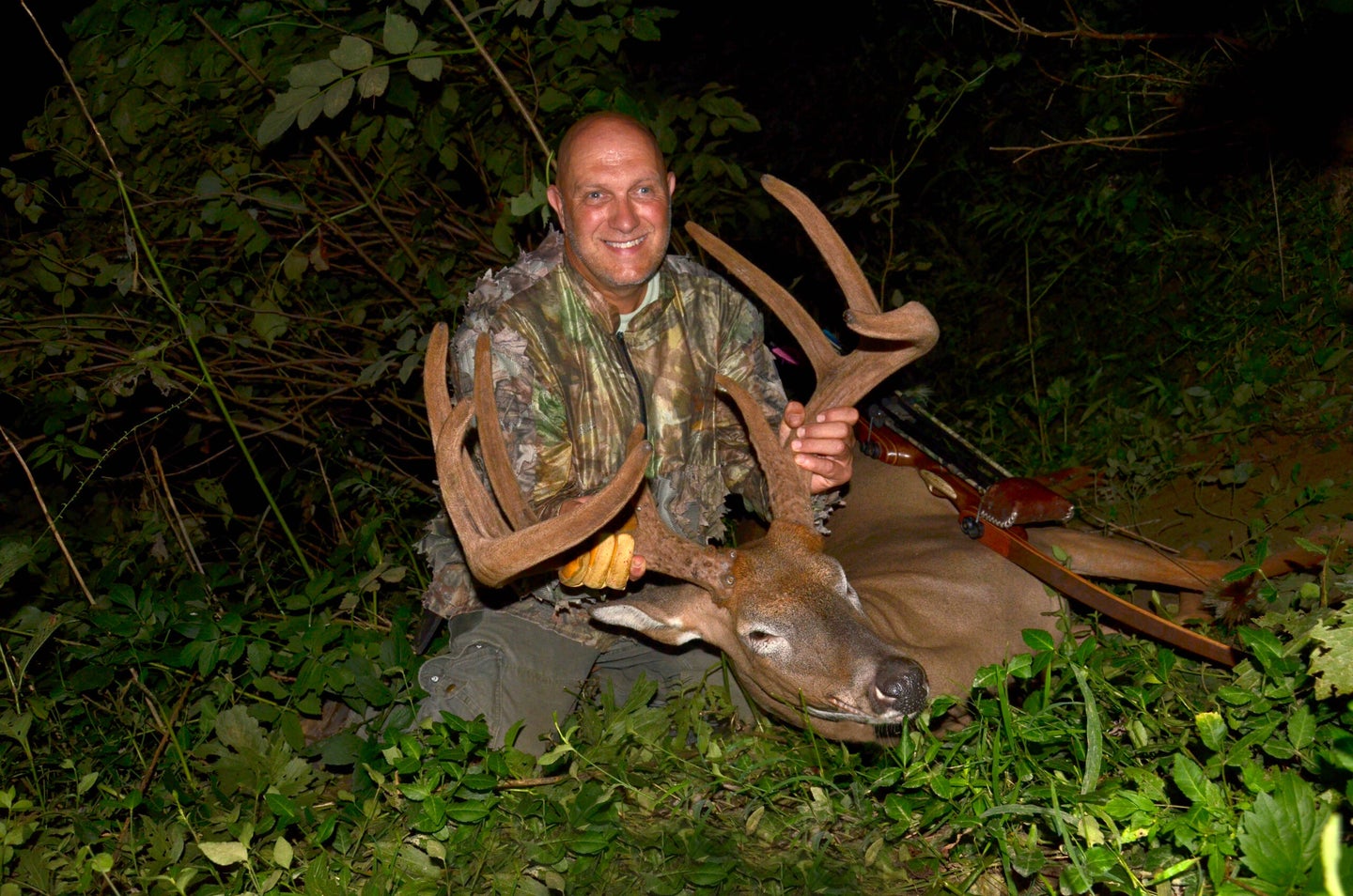 One of the things Kentucky deer hunters look forward to is hunting velvet bucks. The window is short, usually lasting only five to 10 days, but those who work hard to pattern deer during the pre-season have a great chance of tagging a good buck. Here are a handful of the best velvet bucks to come out of Kentucky’s 2021 bowseason.

It isn’t every day you tag a giant 179-inch deer, and it’s even rarer to do so with traditional archery equipment. Joe Lacefield accomplished both simultaneously. His story started several years ago, when a big 9-pointer graced his trail cameras. Each year the buck packed on more antler growth, but Lacefield couldn’t get within range for a shot. His window was narrow, too: Shortly after shedding its velvet, the buck always departed Lacefield’s hunting grounds.

This fall, Lacefield knew he’d have to target and tag the buck quickly—he was running out of chances. So, on opening weekend, he moved in and hunted along a promising ridge line. Soon after settling into the stand, deer began moving. Buck after buck walked in and out of view, but each one looked up at Lacefield’s position. None of them fully spooked, but they didn’t like what they saw, either.

Then, after seven or eight bucks walked through, he spotted giant antlers moving through the timber. He quickly recognized the big typical, and watched as it walked all the way to within 15 yards. Lacefield slowly drew back. His broadhead zipped through the vitals, and the buck took off. Later that night, Lacefield recovered the deer—his biggest ever. It stretched the tape to 179 inches.

Big, heavy, long-beamed bucks are the stuff of dreams, but Logan Beach experienced the real thing on opening day this year. With lessons learned from past seasons, Beach was excited when a familiar buck started showing up on his trail camera this summer.

On the afternoon of opening day, Beach climbed into his treestand and settled in for his hunt. Deer began moving and, later in the day, movement really began to pick up. Eventually, the buck he was hoping to see walked into the clearing, and Beach took the shot. The big velvet buck ran a few steps, tangled its antlers in a tree, and collapsed.

Beach was ecstatic. He climbed down and walked over to the downed deer. The velvet was a little damaged from the branches, but Beach didn’t much care. He just sat there, admiring the deer and soaking in the conclusion of a multi-year hunt.

Nathan Taylor started getting trail camera photos of a nice typical in 2019. By 2021, it had grown into a stud 4.5-year-old. This summer, the buck used a consistent travel route, and Taylor quickly patterned the deer.

It was cloudy and cool on Sept. 5. A cold front passed through, and Taylor expected deer to be on their feet. He eased toward a stand on top of a ridge that tapers down to a soybean field. Several oaks were already dropping acorns, and there was heavy deer sign. Taylor knew it to be a great staging area before deer head out to feed in the soybeans.

The afternoon started off slow, with very little deer movement. He saw only two deer that evening: A 3-year-old buck traveling with the big 4.5-year-old he was hoping to see. Both bucks walked to within 18 yards, and Taylor took the shot. The big 10-pointer ran 100 yards and crashed. A couple friends helped Taylor recover the deer. The velvet buck is his best archery buck to date, and one he won’t soon forget.

Ryan Mattingly spends a lot of time chasing whitetails. He spotted this giant in person for the first time in 2019, but didn’t close the gap. After that season, he decided to focus all his energy on hunting that deer. He continued to get trail camera photos in 2019 and 2020, and even had numerous in-person encounters that were foiled by farmers or trespassers.

Much to his surprise, the deer returned this summer. Hoping to hunt the buck on the opener, he decided to set his stand on the edge of some woods that sat high on a little knob. The timber dropped off into a drainage about 60 yards away. Another field and drain stretched out behind him.

Read Next: 10 Amazing Photos of a Buck Shedding Velvet

It was also the opening of dove season, and after climbing into the stand, he heard gunshots everywhere. He even started hearing loud music. Thinking his hunt was over, he started to climb down, then decided against it. It was a wise decision, because soon he noticed deer started moving. Eventually, the music stopped and the shotgun blasts faded. The next time he looked over his shoulder, he spotted the big deer walking toward him. When the buck reached 35 yards, Mattingly released his arrow.

A couple hours later, he and his father recovered the buck 90 yards from where Mattingly had shot the big velvet buck. He remembers it as a bittersweet moment: He’d finally tagged the buck, but now the hunt was over.

Ed Arkenau, his son, and their friend Cole had hundreds of trail camera photos of a particular buck in 2019, 2020, and 2021. They knew they’d target the giant 12-pointer this year, and they did just that on the Kentucky opener.

The buck was spending most of his time on 20 of their 200-plus acres. The deer frequented a food plot they’d planted specifically for him, and his movements became very predictable. He moved frequently during daylight, but they knew they didn’t have all fall to make something happen. This big buck had historically spent the early and late seasons on the Arkenau’s property, and spent the rut elsewhere.

On Sept. 4, well before daylight, the Arkenau’s eased into an elevated Muddy blind positioned on a wood line. A food plot and lots of edge habitat stretched out in front of them. A creek rippled along behind the blind. The morning started out peacefully, with a small buck feeding around. Then, around 7 a.m., the big deer walked out, and Ed took the 25-yard shot. The broadhead struck true, and the giant bolted for cover.

After giving the deer plenty of time, the Arkenaus took up the blood trail, and found the buck. The whole crew was there to celebrate their collective accomplishment, and one that was years in the making.

Kentucky hunter Daniel Deckard didn’t expect to start his deer season with an injury, but that’s exactly what happened. Six weeks before the opener, he fell from a 12-foot ladder stand, and broke or fractured his wrists, ribs, and ankles. He even had surgery on his wrist.

Obviously, he wouldn’t be drawing a compound bow for a few months. While in the hospital, he learned about the temporary crossbow permit for injured and disabled hunters. He decided crossbowhunting was the only option to hunt this giant deer this fall.

On opening afternoon, the buck walked in front of Deckard’s father’s hunting blind, but he wasn’t there to kill it. They next day, it showed up in front of another treestand, but both the Deckards were sitting in the blind. On the third day, the buck didn’t show at all. So, on the fourth day of season, Deckard and his dad decided to split up. His father returned to the blind, and Deckard went to another spot.

Read Next: How to Tag a Velvet Whitetail Buck (and the Best States to Make It Happen)

Right after Deckard settled in, he spotted the buck in the corn running away from his father’s blind and down into a ravine. Shortly after, some young bucks walked through. Then, the big deer came back out, now concealed by a bunch of weeds. When the buck walked through an opening, and the younger Deckard shot—and missed. The deer jumped, and then walked back into cover.

About 15 minutes before dark, the deer appeared yet again, walking toward Deckard’s stand for a third time. His second shot struck true. The buck ran about 50 yards and died in the brush. While Deckard had hoped his father would be the one to kill the big velvet buck, they were both just glad a Deckard had tagged him.