There's one way to shed an antler 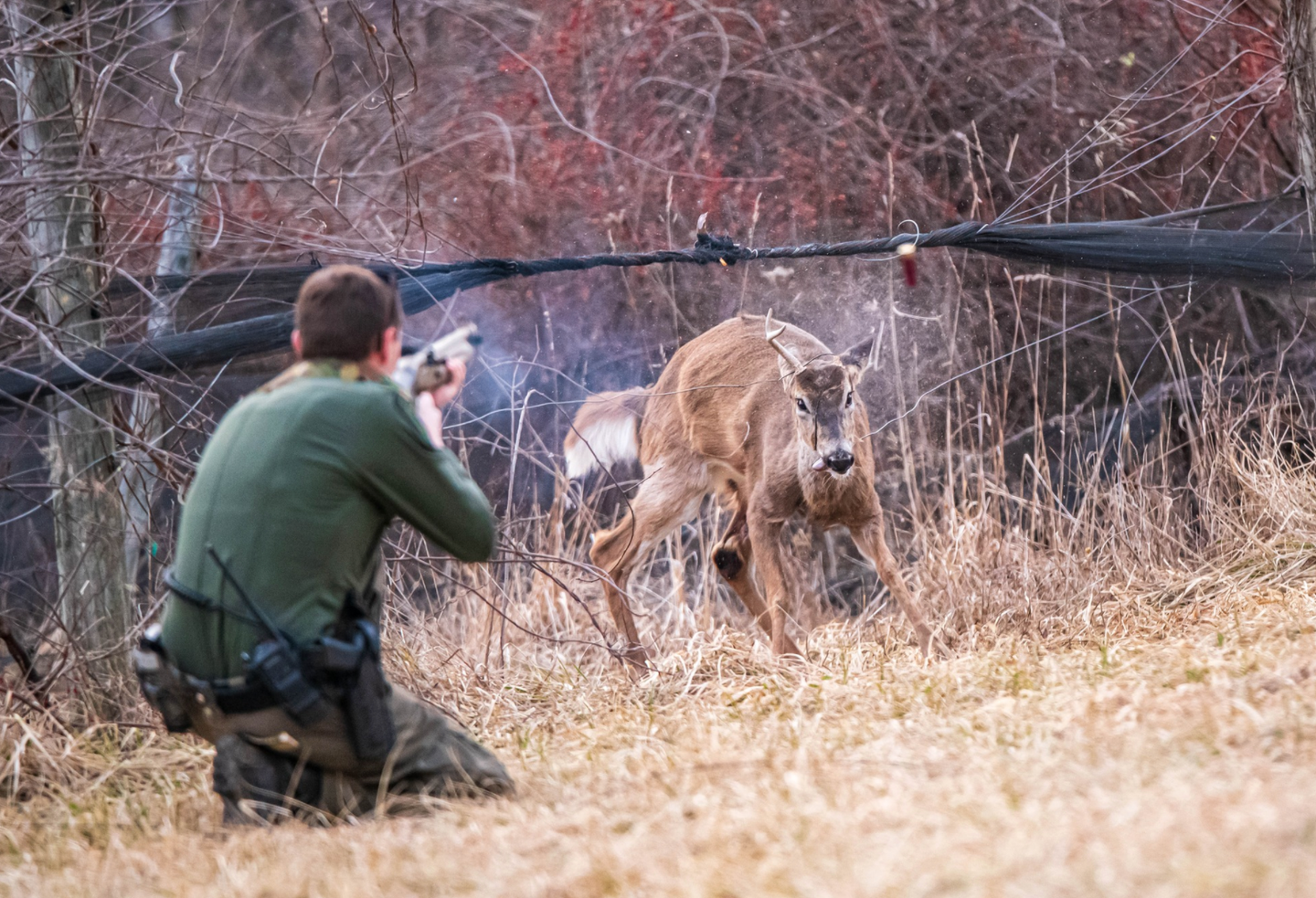 It’s a rare scene to come across yourself, but videos of folks freeing whitetails trapped in awkward situations are ubiquitous come deer season. Most of the time these viral videos show a hunter separating a pair of locked up bucks with an angle grinder or, as happened last week in Texas, a Cowboys fan brandishing a folding chair as he attempts to dislodge a deer from his fence. But the series of photos posted to the Pennsylvania Game Commission’s social media accounts Monday were unusual not just in the quality of the photos, but in their methodology.

When a concerned citizen reported that a buck had its antler stuck in an old winery net in Berks County on March 6, state game warden Ryan Zawada responded to the call.

The wire was actually wrapped behind the antlers and along the deer’s head, which posed a problem. The deer was so distressed by the time Zawada arrived that he couldn’t get close enough to physically subdue it. Cutting the net from a distance wasn’t an option, either—it was made of tensile steel.

“There was sign on the ground that had been there struggling for a while, the ground looked like a little rototiller had hit it,” Zawada says. “So I didn’t want to approach it super close, because if I got within 50 yards it would get pretty wild and almost clotheslined itself.”

Zawada has worked in the field for the Pennsylvania Game Commission since February 2019, and in that time he’s responded to just a handful of trapped-deer calls. There are a few methods for releasing a deer, but the way in which the deer was stuck prevented him from deploying most of them. One approved method is tasering a deer, which gives responders just 5 seconds to sawzall the trapped antler. But doing so in this situation would’ve caused the deer to hang by its neck. Zawada also decided against using tranquilizing drugs to immobilize the deer. The deer’s fatigue and adrenaline-fueled state might’ve caused it to have an adverse or fatal reaction to the drugs, in which case Zawada couldn’t donate the venison.

So instead of approaching the deer, Zawada opted to solve the problem from a distance with his agency-issued Beretta 1301 12-gauge.

“Even with the shotgun I was very confident that it would be fine,” Zawada says. “I just aimed high against the wire, well away from its head. And in the worst case scenario, at least I’d be able to donate the [meat] to needy families in the area.”

After the shot, Zawada says, he watched the young buck—unharmed but with one fewer antler—jump an old stone wall and run roughly 500 yards until it disappeared into a timber lot. The agency credits Patrick Scott for calling the authorities about the distressed buck, as well as for his excellent photographs of the incident. Since they were posted to Facebook Monday afternoon, the images have already received more than a thousand shares.

Editor’s Note: This story was updated to include comments from the game warden involved in the release.