It was a long and brutally hot opening day in southern Idaho, but for this father and son duo, the reward was well worth the wait 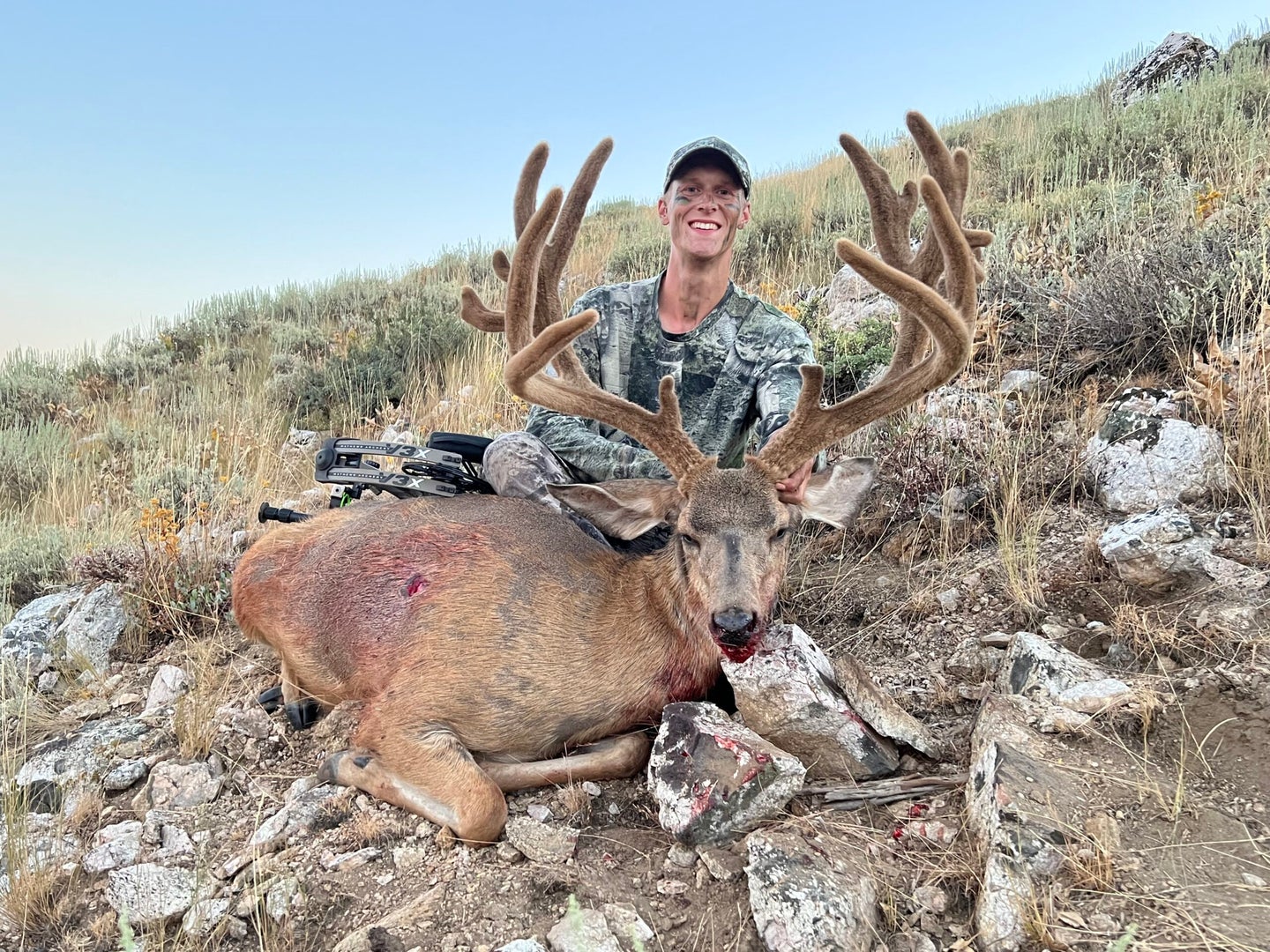 As Hunter Crownover and his dad Wayne lay face-down in the hot gravel, the two mule deer bucks they had been stalking all morning stayed bedded down in the shade, roughly 30 yards away. The big four-point and the massive nontypical were underneath the only tree in sight, and it sheltered a small spring about the size of a softball. Unlike Hunter and Wayne, who had been cooking there in the 100-degree heat for at least two hours, the two muleys didn’t have any reason to move. Until they did.

The wind might have swirled. Hunter can’t be sure. But when the two bucks blew out of there, he and his dad dropped their heads and figured their hunt was blown. They kept eyes on the two deer as they ran down into a bowl and up the other side. They were surprised to see the bucks stop to feed before bedding down again in the shade below a ridge. This gave them another opportunity. The two hunters looped around the top, following the ridgeline, and re-situated themselves above the bucks on the far side of the bowl.

By the time they got there, the wind had shifted again, and they settled in for another long sit.

“It was absolutely brutal,” Hunter says. “We finally found one little four-foot rock and we both huddled underneath it, trying to get a tiny bit of shade. We watched them all afternoon until we finally got a crosswind. The four-point was bedded above the non-typical and he was in a perfect spot, so we decided we’d sneak over the top and try to kill him.”

Born and raised in southern Idaho, 23-year-old Hunter says he’s been bowhunting with his dad since before he could walk.

“He’d just throw me in his pack and take me with him,” Hunter says. “He’s the one who kind of taught me everything.”

So, two years ago, when Hunter had the goods on a big nontypical he’d been watching during the lead-up to the archery opener, he told his dad Wayne exactly where to go to find the buck. Wayne found him opening morning, but the deer never gave him a shot opportunity. The next day, some other hunters came into the area, and Hunter says he never saw the buck again, until earlier this month.

“It was the week before the season started this year, and I was scouting in the same area,” Hunter says, referring to a large chunk of public land near Boise. “I ended up finding him in the same spot he was two years ago. So, we knew how he was moving around, and we kind of already knew how to hunt him. Our plan was to get to the very top of the mountain by daylight so we could find him and bed him.”

Hunter and Wayne did just that, waking up before 4 a.m. on August 15 and hiking to the top of the mountain before sunrise. After glassing for half an hour, they spotted the big nontypical. Peeking over the top of a ridge, they saw the buck feeding alongside a giant four-point. They followed the two bucks as they made their way over to the lone tree to bed down near the small spring.

After watching the bucks blow out and getting re-situated near the rock they’d found, the two hunters played the waiting game again until the wind turned in their favor. At that point, they had their sights on the big four-point that was bedded further up the hill.

“We slowly slipped within 35 yards of the four-point, and we were just waiting for him to stand up,” Hunter says. “Then, next thing I know, the nontypical gets up and starts feeding uphill toward us. He gets to about 70 yards and starts walking right at us.”

Lying in the sagebrush, Hunter and Wayne stayed hidden as the buck walked toward them. By the time he got within 40 yards, Hunter was starting to worry they might not get a shot, but at 35 yards, the muley turned broadside and started side-hilling.

The two held at full draw as the buck walked along. Finally, he stopped just past a bush and gave Hunter an opening.

“He gave me about four inches of clearance,” Hunter says, “so I pinned him behind the shoulder, let it go, and I smoked him.”

The buck trotted about 50 yards and fell. After a long day of stalking, waiting, and baking in the August sun, Hunter collapsed to the ground as well. He had just killed the biggest buck of his life (they later rough scored the rack at 204 inches). The two hunters had just enough light to take some pictures, and by the time they dressed out the deer and made it back to camp, it was just past 1 a.m.

“We had left at 4 that morning, so it was a 20-hour day for us. We were out of water, exhausted, and dying from the heat,” Hunter says. “It was worth it.”