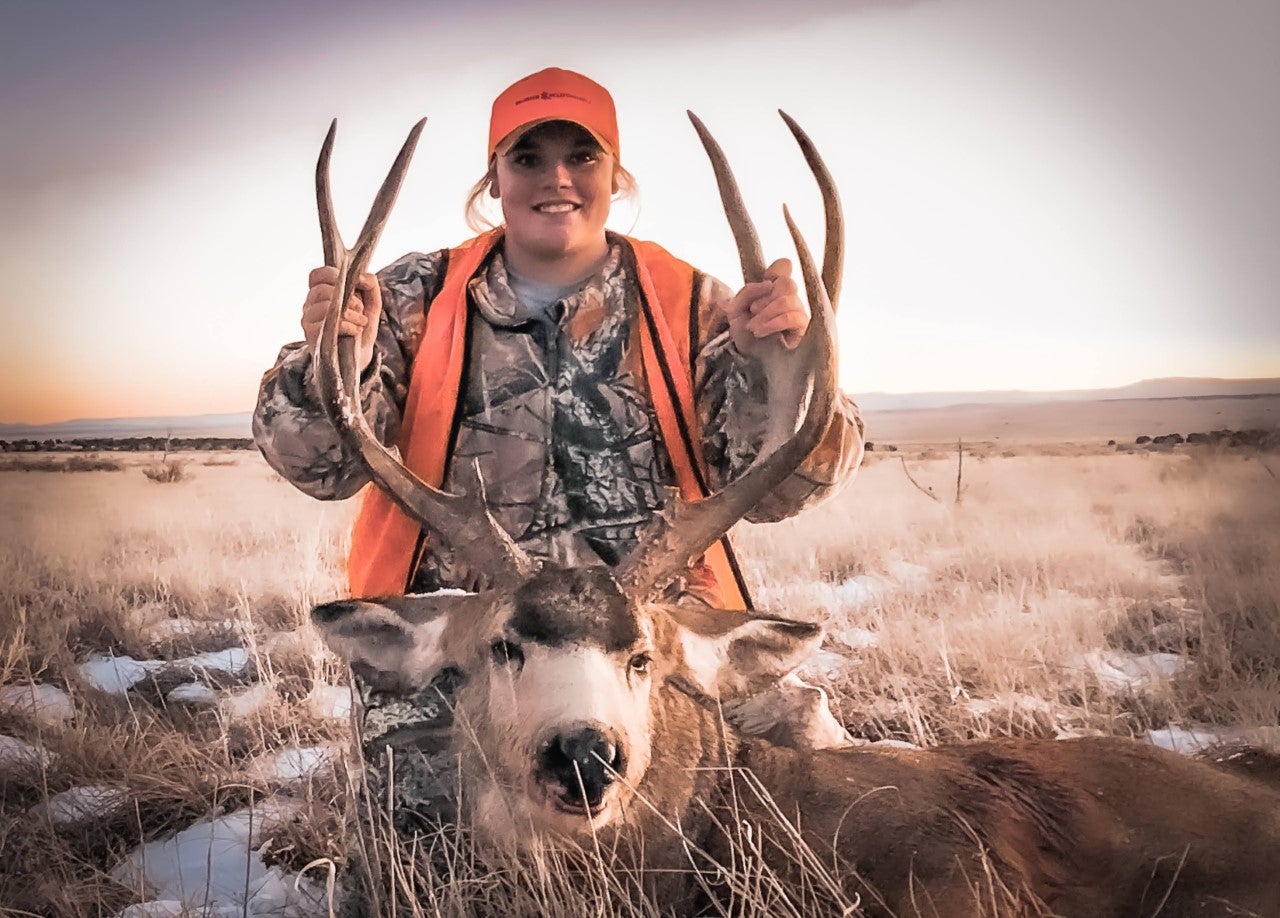 Colorado is home to some massive mule deer, and resident Danny Chavez has always had a knack for finding them. A hunter in the purest sense, Danny has harvested multiple big mule deer with both bow and rifle. He does his research, puts in the time, and by season’s end, always seems to punch his tag. This hunt, however, was different. Danny would be acting as a guide, putting his decades of deer knowledge to the test to help his wife Lisa and 20-year-old daughter Alyssa, harvest a pair of big bucks.

“I felt the pressure,” Danny laughed. “Of course, I knew the area extremely well, but finding one, let alone two good bucks is always a challenge. I wanted to give them both a great hunt and a great experience.”

This hunt for the Chavez girls was a decade in the making. Danny had been strategically putting Lisa and Alyssa into Colorado’s annual big-game draw, and this year, they were selected.

“These tags don’t come along often,” Danny noted. “When you draw them, you want to make the most of them. I knew this area had great big-buck potential, and that if we put in the time we’d likely get a crack at a pair of shooters, but still, I felt the pressure.”

Danny knew this public tract like the back of his hand, and the rut was on, so he knew bucks would be moving.

“This area can be tricky,” Danny said. “You will see deer off and on throughout the year, but those giant bucks just don’t give you many visuals. Of course, you can glass one working along a ridge in October or catch one dashing across a two-track as it heads back to its napping grounds, but you just don’t tend to see those true slammers all that much. They are masters of the landscape and survivors. Does change that a little.”

Colorado is a unique state for hunting mule deer. There are multiple seasons, and hunters here, depending on the area and season drawn, have the option to chase bucks from early September through December. There are early-season velvet bucks in the willow-rich alpine basins and hard-horned bucks during the rut. Plus, if hunters do their research, they will find that archery, rifle, and muzzleloader seasons overlap each timeframe.

The Chavez clan was able to get out and do some scouting, and Danny had a few friends hunting the same plot of land for pronghorn and elk earlier in the year, so the reports were funneling his way, and they had a good plan in place.

“It’s great to have awesome friends and have good intel,” said Danny. “You want to have a jumping off point. However, I knew the big boys would be where the girls were, so that became our focus. This is big country. It’s measured in hundreds of thousands of acres. There are open areas of prairie-like landscape, big hills covered with pinon and cedar trees and deep canyons. The deer can be found in each. We needed to cover country and use our optics.”

Sadly, as can be the case with any hunt, but especially those that take place late in the year, the weather turned nasty. Along with dropping temperatures came wind, lots and lots of wind. Of course, you can hunt in the wind and the rut will continue, but this wind was a little different with constant speeds of 30 mph gusting to over 40 mph. It severely limited how far mother and daughter could ethically shoot, and the gusts pushed deer into thick pockets where they could still rut and not be seen.

“We lost two days, and those were the first two days of the season,” Danny noted. “It was super frustrating. We knew the season was long and we had time, but we were amped and ready for the opener, and though we went out, it was pretty much a bust. Days like these can play with your psyche, but we stayed positive. We knew the wind was going to push out, and once it did, the rut would be rocking.”

Worth a Second Look

Day three of the hunt proved to be magical. Conditions were perfect and the bucks were feeling frisky. The plan was simple: Walk out to points of long ridges and glass open areas below. Use the truck to cover lots of ground, stopping often to glass various sage flats, cactus-filled draws, and cottonwood-lined creeks.

“We glassed up Alyssa’s buck from a mile away,” Danny said. “You really need to consider your glass when hunting open country landscapes for mule deer. This means everything from your binoculars to your spotter to your scope. Good glass will make all the difference. Your choice in rangefinder is something else to consider. You want a quality rangefinder that has some magnification and will provide instant target feedback. Shots in this country can be long, and you want a rangefinder you can trust.”

Heavy! That was the thought Team Chavez had about the buck they were looking over. And the crew moved in for a closer look.

“It was a long discussion,” Danny recalled. “He was a great deer with incredible mass. He was mature, no doubt, but he was narrow and didn’t fork on one of his fronts. It was early in the hunt, and we made the decision to pass.”

The drive to the next area, according to Danny, was filled with less glassing and more talking about the buck they’d just let go. The “what if” talk had started, and being a seasoned hunter, Danny knew going back for one more look was the right thing to do.

Getting close wasn’t an issue. The buck was love-struck. If the crew of hunters could use the terrain and avoid the keen eyes, ears, and noses of the five does, Alyssa would earn her shot. They did just that, and at a distance of 150 yards, Alyssa pulled the trigger and connected.

The buck had bases as big as a soda can, and was a gnarly, old warrior. He was the perfect buck for Alyssa — a birthday buck — and the entire family was thrilled with the kill. The family spent the evening packing out meat, a perfect end to a glorious day in deer country.

Day four would prove to be just as eventful. The crew was back after it at first light.

“I thought it was going to happen early,” Danny recalled. “We found the right buck. There was no question he was a shooter. The buck had it all: mass, width, tine length. The problem was the does. The rut had this buck going hard, which made it difficult to close ground on him. When we did get close enough, we just couldn’t get an ethical shot. He was moving from one doe to the next, and getting a good shot just wasn’t in the cards.”

Rather than pushing a bad situation, they made the decision to back out. They knew the area extremely well and with limited hunting pressure, figured they could slip back in for an evening hunt.

“We got set in a good position early in the afternoon,” Danny said. “We could see a good distance and the wind was right. We didn’t have to wait long. The does came out first, and he was close behind. I knew this was the buck of a lifetime — a true plains monster — and was doing my best to keep my bride of 21 years calm. The distance was 336 yards. I had no doubt Lisa could make the shot, and with the buck standing still, she squeezed the trigger on her 6.5-284 Norma Savage 110 LRH. The hit was perfect, and the buck was dead in seconds.”

As Danny suspected, this buck had it all and scored an impressive 195 4/8 inches (unofficial). Of course, Danny will have the buck scored, but it will be the hunt and not the 375-plus inches of antlers the crew put on the Colorado dirt over a 48-hour period he will remember. It will be the sights and the sounds — the laughter and frustration — the tears of joy and relief they will tell of around crackling campfires for years to come.