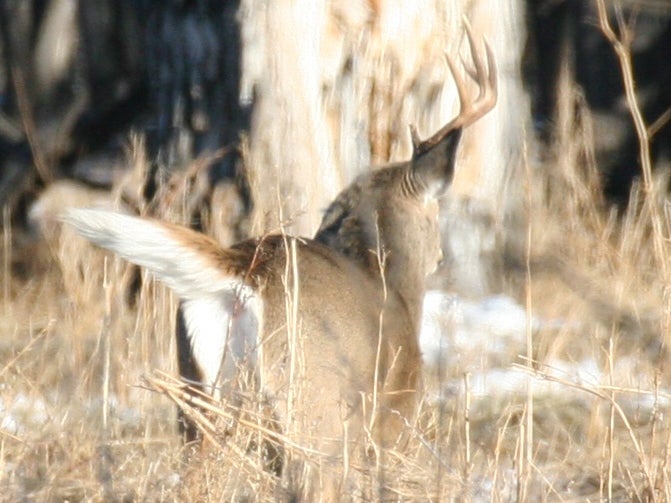 By the time you read this post, this bucks will have cast his last antler, making it ripe for the picking. Mike Hanback
SHARE

Many people have been hunting for shed antlers for two or three months, but not me. I wait until conditions are right—and that’s now.

Across America most all whitetail bucks have dropped their antlers by mid to late March. The last snows have melted, the weather is warming and deer herds are out of winter stress.

Take a look around. The woods are barren and brown. Grass and brush are pounded down. Crop fields and pastures are low to the dirt. Sheds are as visible as they’ll ever be, and ripe for the taking.

So lace up your boots and go. Here’s how to do it, and where to look.

1. Hunt Where the Deer Are

Most people naturally start looking for sheds in the same areas where they hunt deer each fall. You might find some bone in these places, or you might not.

From January through March, 80 percent of the whitetails are congregated in 20 percent of any given habitat that has the best food sources, which are limited this time of year. In this 20 percent pocket is where bucks cast their antlers, and where you need to look.

“I actually find few antlers in the same area I hunt, it’s just not the place where the deer spend the winter,” says South Dakota shed fanatic Kelly Kirsch, who picks up more than 100 antlers each year. “You need to find where the deer gather and feed from January until this time of year.”

If that is on the same ground where you hunt, great. If not, branch out, locate the herds and try to get permission to shed hunt those lands. The deer might be close, or hanging out a couple miles away.

Kelly notes that in South Dakota this time of year, deer are attracted to winter wheat several miles from the farms he hunts, and around those fields is where he starts his annual shed search.

Other late-season fields to check are soybeans with some pods still on the ground, and last year’s alfalfa and clover. Standing corn that was not cut for some reason is a sure-fire spot to scare up a few sheds. Corn stubble is good, too. While you might spot an antler or two out in the open, be sure to walk and check brushy and grassy field edges.

This is my favorite place to look: A scrubby, overgrown field with some browse, berries, locust trees (deer love the pods), and the like. In winter, many bucks feel comfortable feeding and hiding in these gnarly spots, and drop their antlers there.

3. Look in the Bedroom

Brushy, wooded staging areas within 100 yards of old crop fields is the next place to check. And from there, branch out a bit more and follow deer trails to nearby bedding areas. Montana shed-hunting expert Dick Idol told me he finds his biggest sheds in thick covers where mature bucks stage in winter, and along multiple trails that link sanctuaries with nearby feed fields. Walk every muddy deer trail that you can, and you’ll find bone.

4. Put in the Boot Leather

Now that you have a good idea of where to start your search for antlers, and have secured permission to access as many private fields and woods that you can, get out there and go. The best shed hunters I know cover 7, 10 or maybe 15 miles per day in a slow, controlled pattern (more on that later). It’s not only fun, but great exercise—especially when you’ve been shut in for days. Wear comfortable boots and carry plenty of water.

As you hike, veer over and hit every east- and south-facing exposure, especially weedy fields and hillsides that are open to plenty of sunlight. Deer spent a lot of time loafing there in January and February, and bucks dropped bone there. Go and find it.

Brown or white antlers are easiest to spot on an overcast day. If it is raining lightly fine, bone will shine and catch your eye. Antlers are hardest to pick out in full, harsh sunshine.

Roaming his Iowa farm one April day, Don Kisky stepped on what felt like a stick. He dug through the leaves and uncovered a 5-point shed that scored 75 inches. Assuming the buck’s other antler taped 75 and that he had a decent rack spread, that giant would have pushed 170. With his new rack the next fall, the deer would be Boone and Crockett, and living on Don’s farm.

You might want to bag the hunting boots and wear sneakers or soft-soled trail runners so you can feel those big “sticks” you step on. Wear thin, lightweight hiking gaiters with your lo tops to keep the weeds and thorns out.

Cover lots of ground in a slow, methodical manner and you’ll find twice as many sheds as you might have in the past. “Most people look right over antlers,” says my friend and whitetail expert Terry Drury. “They walk too fast and look too far out front.”

A shed hunt is not a race. Take it slow and deliberately, look straight down and scan every square foot of the ground. You might spot a whole antler, or maybe just a tine sticking up. Some sheds are white, others are brown and blend into the grass and leaves. “You’ve got to look close, real close,” says Terry Drury..

To keep from wandering aimlessly the woods, it helps me to mark off grids with trees, rocks, logs and other landmarks. Walk each grid and look straight down around your feet for sheds, then move on to the next grid.

Read Next: 4 Shed Hunting Experts Told Us Their Strategy for Finding Antlers

Everybody uses binoculars when hunting hard-horned bucks, but less than half the shed hunters I run into carry them. Mistake. One day I sat on a hillside and glassed 3 sheds in an alfalfa field below. Sunlight glinted on the whitish bone and helped me pick them up in my binos.

Stop frequently as you walk to glass fields, fence lines, river banks and similar open areas. Tip: You’ll be walking for miles and hours, so wear a harness that holds your binoculars snugly on your chest.

An old-timer in Wyoming who finds more than 100 whitetail sheds on his river bottom ranch every year taught me this trick. Look in a wooded area that was recently grazed by a herd of cattle. The cows uncover and kick up fresh antlers from this year, and chalky ones that are a year or two old.

I’ve got another rancher friend, this one who lives on the Milk River in Montana, who saddles up his horse and rides for miles along the river banks and through the adjoining woodlots and points. “I can’t tell you how many sheds I’ve found that I walked right by days and weeks before,” says Eliot. “Antlers are easier to see when you look straight down from a horse.”

The Labrador retriever is by far most popular, but Dokken says that any breed with a strong instinct to retrieve can pick it up quickly. “With just a little basic training, a bird dog can learn to find sheds, and then he can multi-task between retrieving ducks and shed hunting in spring,” he says. Hunting dogs are particularly good shed finders because they quickly zero in on the calcium-phosphorous odor of antlers.

You can train your family pet, say a Lab or golden retriever you keep in the house, to hunt sheds. “We’re seeing all sorts of people who just want to get out in the woods in the spring and have some fun with their dogs,” says Dokken. “If your dog likes to retrieve anything, a ball or training dummy or whatever, that’s the game. Just substitute an antler, get your dog used to finding and picking it up and having fun with it, and you’ve got the makings of a shed dog.”

As you roam the woods there’s a chance you’ll stumble across a “deadhead,” or the skull and antlers and carcass of a buck that perished months earlier. Any number of things could have caused the buck’s demise: hit by a car, lost by a bowhunter last season, Hemorrhagic or even Chronic Wasting Disease.

Most deadheads have small to medium-size racks, but each year a few people chance upon a monster.

Drew had been bowhunting the buck for 3 years. “A truly remarkable animal that we called Moose,” he says.” Unfortunately, Moose died due to another bowhunter’s mistake, and Drew recovered his skull and antlers the following spring. The incredible rack scored 252 1/8 inches, and that “was after squirrels had chewed off 20 inches during the winter,” Drew says.

A deadhead like Moose is an incredible if sad find. But before you run and post a picture of it on Facebook or Instagram, keep in mind that in most states you need a salvage permit or at least permission from a conservation officer before you can possess any buck with skull and antlers attached. Check your state regulations for salvage requirements, and if it’s unclear call a local game warden for advice. Wardens watch social media, as they should, so don’t get jammed up.

Years ago some Missouri guys had walked all day and hadn’t found one bone. As a last-ditch effort, they checked a little brush lot where an old house once stood. Walking around the crumbling foundation, one fellow saw an old well, peered down into it and hollered. His buddies came running and they fished out the 140-class deadhead.

For the buck it was an unlucky way to go, but for the shed hunters it proved a point: Check every out-of-the-way spot, you never know what you might find.

“As you walk, look, think and get a feel for the lay of the land,” says South Dakotan Kelly Kirsch, as mentioned earlier one of the most accomplished shed hunters I know. “In your mind try to figure out what a buck was doing here two months ago in the cold and snow, where he was eating and going to bed. Listen to your subconscious. If your mind says bear left, go left. I can’t tell you how many times I’m walking and my brain says go this way, so I do and find a big antler.”

Read Next: The 10 Rules of Shed Hunting

If you find several good-size sheds on a ridge or in a creek bottom, mark those spots on a map or drop a pin on Google Earth or an app like onX Hunt. Whitetails are habitual, and you’ll find more antlers there next year if crops and cover in the area remain the same. Come back next March and search again.

18. How Much Are Antlers Worth?

Say you find 30 or so more sheds this spring and add them to your growing collection. You might want to sell some, so how much are they worth? It depends on the condition and grade of the bone: