Tips from THP: How to Hunt Public Land Whitetails in Open Country

Jake Huebschman and The Hunting Public Crew stalked the public river bottoms of North Dakota. Here's what they learned 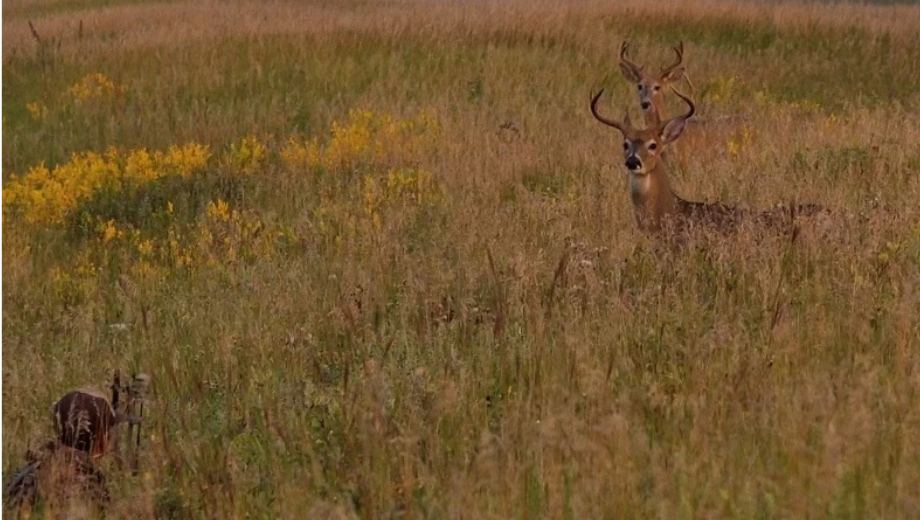 A close call in North Dakota. The Hunting Public
SHARE

For the second stop of The Hunting Public’s Deer Tour, Jake Huebschman set out for North Dakota to chase whitetails on public land with his bow. Having been to this area of North Dakota before, Huebschman and his two cameramen, Zach Ferenbaugh and Nick Andrews, felt they had a solid game plan. Similar to the previous hunt we covered with Aaron Warbritton, the crew planned to target river bottoms. Here’s what you can learn from their hunt.

Be Ready to Change Areas

When the crew arrived, two days prior to the season opener,  Huebschman was prepared to scout and dial in a game plan for stalking a nice buck. To his surprise, he struggled to find any deer the first day of scouting. To kick off the second day, the crew scoured a river bottom for hours and only ended up seeing three whitetails, none of which were shooter bucks.

Huebschman was surprised and frustrated. In an attempt to find out why they weren’t seeing deer, he went to the North Dakota Game & Fish website to look at the EHD map and found that he was hunting in the middle of a hot zone. In his preparation for the hunt, the thought of EHD had not crossed his mind. This was an oversight that cost him two days of scouting and a long 6-hour drive out of the hot zone.

“Sometimes it takes a huge move, whether it’s EHD or too much hunting pressure affecting the deer, don’t get too emotionally attached to a spot and always be willing to make a move,” says Huebschman.

When making a big move, the crew likes to look for spots where they have to get creative with access or spots where they can outwork other hunters in the area. In this instance, they looked for river bottoms without trees nearby. This would help them avoid potential bowhunting pressure from treestand hunters.

“We ended up finding a spot along the river bottom with some cattails which were used as a bedding area mixed in amongst a big system of sloughs,” Huebschman says.

In this new spot, they were blown away by the number of deer they had found. Huebschman knew this would be a prime area to focus on.

Whether you’re hunting private land or public, it’s tempting to keep hunting the same areas year in and year out, but if you notice a decline in deer sightings, don’t be afraid to pick out a new spot on the map and give it a try.

The crew uses the OnX Hunt app, to find high points in the terrain that overlook areas they plan to hunt. Typically, they would mark out those high points before arriving to the area, but after making their big move out of the EHD hot zone, they had to adapt and find a glassing knob once they arrived.

Once you arrive at a glassing knob, there are some things Huebschman says you should look out for.

“If there is cover on the knob, pop into it or directly in front of it. This will provide some back cover to keep you concealed, and avoid skylining if at all possible,” he says, “Try to pick an oxbow on a river or a finger that goes up above a river bottom where you can see the river bottom in both directions, this will optimize your glassing potential and help you spot more deer.”

Recently, the crew has been using spotting scopes a lot more when hunting open country. Huebschman says that their strategy is to use their binoculars to first locate a deer, then use the spotting scope to get a better idea of if it is a mature buck. In the case that you don’t have a spotting scope, Huebschman recommends, at a minimum, using a tripod to help you stabilize your binocular.

Once Huebschman and the crew had located an ideal glassing knob in the new area, they began taking notes on deer movement. Over the few days they spent hunting this area, they noticed the deer were moving more in the mornings than the afternoons. Huebschman speculates that the deer preferred moving in the mornings because they could move and feed more comfortably in the cooler temperatures compared to the afternoon heat.

Now that they had eyes on deer, their plan was simple. Watch a good buck until he bedded in the morning, “Get em’ Roosted,” as Huebschman says, and then make a good mental note on the trail the buck took into the bedding area. From there, they would head back into the area in the afternoon and set up on the deer trail. In this spot specifically, the deer entered the cattails from one side, almost exclusively, because on the other side was the river, so the deer were likely to enter and exit on the same trail.

Pick the Right Time to Strike

On the fourth day of the hunt, a front was pushing in and there were high winds predicted for the majority of the day. The crew went up to their glassing knob on the oxbow of the river and proceeded to spot a big buck bedded on a side hill in a small thicket. The strange part was that this whitetail buck was bedded down with three mule deer does.

They continued to observe the bedded buck in the small thicket until the wind shifted a bit and Huebschman felt it was a good time to strike.

“We snuck in close to the bedded buck, about 40-yards away, using the terrain to get in tight,” Huebschman says. “He ended up standing in the thicket and walked out about 50 yards away. As we started moving to close the gap a little more, a doe spotted Zach and I. When she busted us and ran, he followed.”

Even though the stalk didn’t work out, Huebschman still believes it was the right time to strike. With the high winds that day, it allowed them to close the gap without being heard by the bedded deer. It simply came down to the buck picking the right trail to feed on.

Huebschman notes, “It’s not always going to work in your favor, even when you pick the right time to strike. Our motto is, you’re either going to spook em’ or kill em’.”

It took them two days to get another chance. This time, they were pursuing a different buck they had been keeping tabs on from their glassing knob. After watching him for a few days, they noticed that the buck would enter the river bottom from a canola field on private land, to come down into the cattails to bed. As they had expected, the crew watched him enter a patch of cattails that morning and assumed he would bed down. As they made their approach, they used footage from their phones to locate landmarks of where they had last seen the buck enter the cattails to get in close.

“We were hoping to see him get up periodically throughout the day and let us get eyes on him so we could make the final move,” says Huebschman, “He didn’t end up getting out of his bed until about 5:30 PM along the edge of the cattails.”

Once the crew had eyes on the buck, they spotted a small levee they could get behind that paralleled the trail the buck was using. As they made their move, the buck and a bachelor group he was with stood up and started moving out of their beds. The group of bucks moved toward Huebschman and as he made a quick maneuver to close the gap. The bucks got too close, spotted him, and he wasn’t able to draw.

“It came down to a few split-seconds there, it’s hard to ask for much more when you’re spot and stalk bowhunting,” says Huebschman.

Even though Huebschman didn’t fill his tag, he and the rest of the crew were able to learn valuable lessons and find new information for their next trip to North Dakota. They’ll be back in mid-October to try again.