Deer of the Year: Chasing a Shadow

Ryan Aulenbacher/ Rock County, Wisconsin My obsession with Mr. Photogenic began after my first trail camera glimpse of him in 2014.... 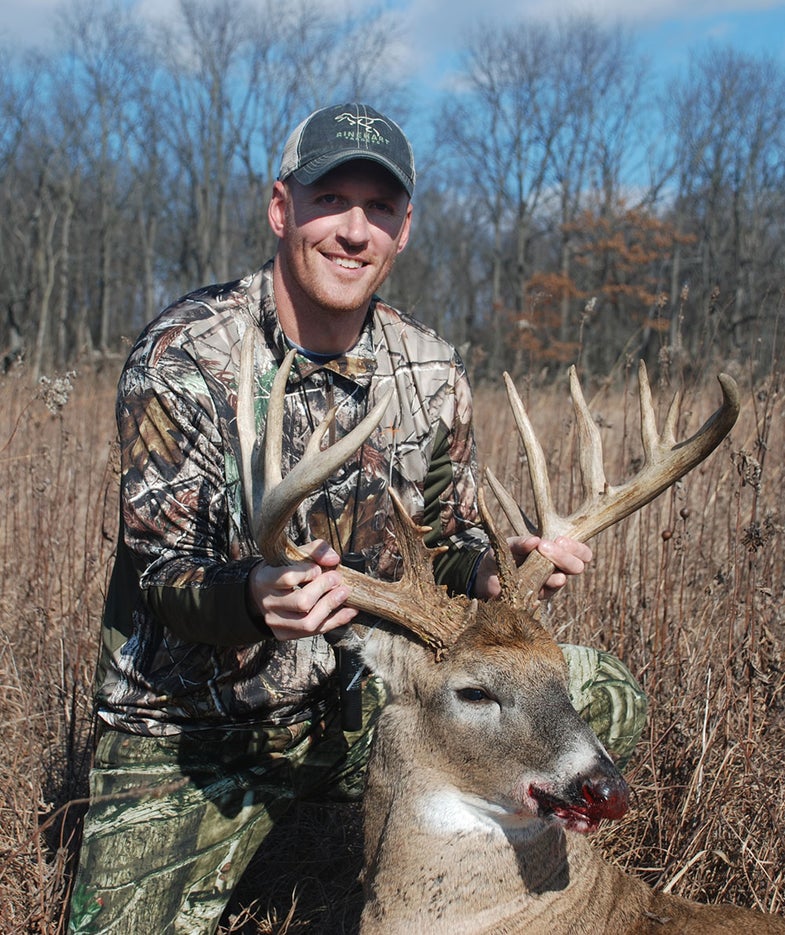 Ryan Aulenbacher played hide-and-seek with this 190-class buck for an entire season before making the most of his lone opportunity in the fall of 2015.
SHARE

My obsession with Mr. Photogenic began after my first trail camera glimpse of him in 2014.

I was hunting our 257-acre family farm in south-central Wisconsin, but where was he? What did I need to do to get a shot opportunity? Would I ever get to draw my bow on this once-in-a-lifetime whitetail? Although he showed up on my cameras five or six times—hence his nickname—it just didn’t happen.

I was relieved that one of the pics came after the close of bow and gun seasons—he’d made it through. Starting in the spring of 2015, I kicked up my efforts, setting up new treestands, spending a ton of time on my food plots, and scouting—a lot—throughout the summer. To make sure I was catching all the action on our farm, I changed out all my trail cameras from red-glow to black flash. My red-glow cameras worked fine, but I noticed that they would only get single photos of deer. The black-flash varieties took multiple shots and seemed not to startle deer at all.

The new cameras captured some great images of Mr. Photogenic. My two favorites were one where he had just 6-inch stubs coming off his head in the spring, and another in late August, when he was in full velvet—he looked huge. All summer long, I played cat and mouse with the buck, trying not to let him catch on to my presence while attempting to confirm his bedding and feeding areas. I made sure to set up stands right before or during a rain shower, so that my scent wouldn’t spook him and the sound of the rain would deaden my footfalls. He didn’t get to be a world-class buck by being careless, and I’d never get him if I messed up even once.

By fall, I had him on camera every two weeks, and as the rut approached, it increased to every three to four days. I knew he was feeling comfortable when, by the end of October, I began getting daytime photos of him. His core area had shrunk to a very small section of the farm. That’s when I figured out where I would need to be to get a shot at him. Although I was paranoid about hunting the same stand too much and saturating the area with scent, the cameras wouldn’t let me leave. I washed my hunting clothes with impractical frequency to try to compensate.

He kept using the same trail—a bush-hogged lane that went south from a CRP field and into a thick 15-year-old stand of pines we keep as a sanctuary. It was almost comical how I could catch him on several cameras within a few hours as he completed an almost circular loop on his route through the woods.

The morning of November 7 was cool and dead calm. At 6:45, two small bucks passed me to the south from the CRP field heading toward the pine bedding area. Half an hour later, I caught a glimpse of a doe running full-tilt about 100 yards to my right, heading due east. Usually during the rut, does are on a catch-me-if-you-can trot, not an I’m–training-for-the-100-meter-dash sprint. By the time I got up, she was almost past my ladder stand. Thirty yards behind her—running just as fast—was the buck. Even the dozens of trail camera photos I had of him could not do his rack justice. When I grabbed my bow off the hanger, I saw why they were running—a snow-white coyote was hot on the heels of the largest buck in the county. The doe took a hard right, losing the coyote, and headed due south and about 40 yards behind me.

I locked on my release, peeked over my right shoulder, and saw the buck jump a log, heading in the same direction as the doe but quite a bit closer to me. That picture is ingrained in my memory: the buck at full speed with his front legs tucked under him as he leaped over the fallen oak. With the buck in full stride, I drew my bow and let out a terrible imitation of a doe call. It was so bad that I let out another yell-grunt to make sure he heard it. At the same time, I started swinging to my left to set up for a shot behind me. The buck locked up solid in his tracks, broadside, as I was at full draw. Of course, his vitals were right behind a 9-inch tree so I couldn’t take the shot. He looked calm, so I wasn’t worried about him bolting. When he took another step I touched it off. I hit right where I was aiming.

I let out a grunt with my grunt tube to try and stop him. I watched the buck slow to a trot, then a walk, and then do what I call a drunk-walk—a little right, then a little left. Then it looked like he slowly lay down about 100 yards from where I stuck him. I found blood right away, but it faded quickly. I called my friend who was hunting nearby and told him I needed help tracking. We went back at around 11 a.m. and walked to the spot where I thought the buck had dropped.

“Big buck down!” My friend got to him first and started counting. “I think there are 20 points! And he’s not suffering from ground shrinkage,” he said. Back at the house we began to measure him—neither one of us have ever had a chance to measure something like that before. His final gross score was 191 ⁴⁄₈ inches—with two broken tines that had been intact the previous week. I’m hoping that the broken tines were from tangling with a buck of the same class, one I can chase this year. A guy can dream!