When Bryce Epple set out for his stand on the evening of Oct. 8, everything seemed to go wrong. He... 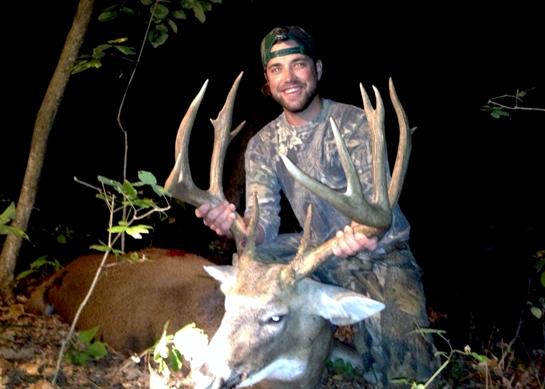 When Bryce Epple set out for his stand on the evening of Oct. 8, everything seemed to go wrong. He was running late, he forgot his quiver, and the platform stand he’d planned to hunt was rotted out. But somehow Epple, 27, turned a frustrating night into his most successful hunt yet. Epple’s buck could go down as the largest typical ever recorded in Gasconade County, Mo.

Epple was hunting his father-in-law’s property near Hermann, Mo., directly south of the Missouri River. After retrieving his quiver from his car at 5:30 p.m., he passed through a cedar grove and walked another 70 yards to the platform stand. When he discovered the stand’s rotten condition, he planted himself on the ground between a pair of trees. Two paths converged to form a T and Epple had a good view down three shooting lanes. Twenty minutes later, a doe walked within six yards of his setup and didn’t bust him in the brush.

Dusk fell and Epple hit his grunt call a few times. Within 10 minutes, he saw movement out of the corner of his eye. “He walked right through the brush to my left, it was just picture perfect,” Epple said. “So I drew back and when he came into view, I noticed that he was a buck, and a shooter buck.”

The bruiser stepped into a shooting lane, but a stray branch forced Epple to maneuver for a better shot. The buck was quartering away, moving off through the brush. Epple grunted the buck to a halt and fired.

“I had no idea until after I let the arrow fly that this thing was a monster,” Epple said. “And he’s running away from me into the woods and I immediately start shaking. Just like, holy crap what did I just do, what’s going on here.”

Epple had seen the broadhead enter farther back than intended, but was pretty sure it struck vitals. Kicking himself for shooting so quickly, Epple waited 15 more minutes until dark. He crept out of the woods to make some calls, and by 8:30 his father-in-law, his dad, his hunting buddy, and his buddy’s son had arrived to help him track the buck.

The search party quickly picked up the blood trail. They followed the dry spots deeper into the woods for nearly 120 yards. When the blood looked fresh, Epple stopped the group and scanned the area with his flashlight. Thirty yards off he spotted an eyeball, and everyone moved closer. “The light kind of comes to and out of the darkness you can just see this gigantic deer lying on the ground with a big rack and his nose buried in the ground,” Epple said. “We all got real quiet, then we all erupted. It was a shock.”

Old trail camera photos show this buck sported an even bigger spread in previous seasons. Even so, one of Epple’s buddies taped the rack at 176 5/8 inches. This rough score could beat the existing Pope and Young Club record for Gasconade County, a buck that measured 170 inches. The largest typical ever taken in Missouri scored 188 4/8 inches and was taken in 2001.