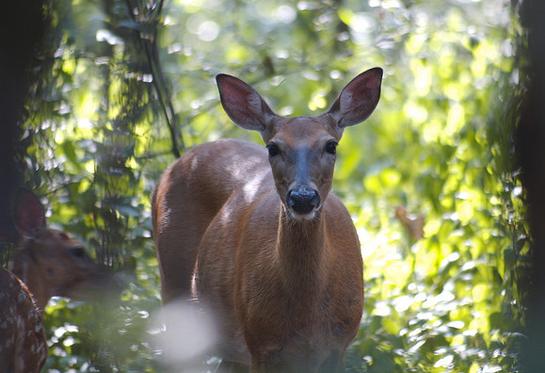 If you’re a deer hunter who likes to wear blue jeans to your stand, you might as well hang a cowbell around your neck to let whitetails know you’re in the woods. And if you wear camouflage with many subtle colors, it may be doing you more harm than good.

At the recent QDMA conference, researchers from the University of Georgia’s Warnell School of Forestry and Natural Resources presented findings from a new study on whitetail vision.

Before getting into that work, to understand what deer see and how their vision is different from ours, it’s important to revisit what we learned about vision in high school science class.

Eyes contain specialized nerves called rods and cones. Different photopigments (or photoreceptors) in cones give animals and humans color vision. Rods contain only one type of light-sensitive pigment and allow us to see in low light, such as at dawn and dusk.

Anatomical studies of deer eyes have found that deer have far more rods in their eyes than humans do. Deer also have a reflective layer called the tapetum lucidum that gives deer the “eye shine” you see in nighttime photos. It also reflects light back over the rods and cones again, giving deer the ability to see far better in low light than we can.

Humans have tri-chromatic color vision, meaning our eyes contain three types of photopigments. The photopigments enable us to see short, moderate and long wavelengths of light, corresponding to blue, green and red colors.

Deer eyes only have two photopigment types, giving them dichromatic color vision. Scientists believe that deer can primarily see short-wavelength blue light, and moderate-wavelength light that they probably perceive as something between red and green.

Unlike in humans, the cones in a deer’s eye are distributed across the back of the eye on a horizontal plane. The lens in a deer’s eye also can’t adjust to objects at varying distances. These factors give deer less visual clarity than humans have. An object a deer is looking at straight on is equally in focus as something out to the side. So don’t assume that because a deer isn’t looking at you that it can’t see you.

“More than anything else, a deer’s eyes are designed to detect movement,” said the University of Georgia’s Dr. Karl Miller, whose students conducted the study.

But it’s one thing to dissect a deer’s eye and make inferences from what you find; it’s something entirely different to have deer tell us what they see.

If this sounds like science fiction, then read on. Biologist Dr. Bradley Cohen trained does to associate light wavelengths with a food reward to test how well deer can see. Deer were given a choice of two empty food troughs, but would only receive a food reward when they chose to eat from the trough where an LED light stimulus was illuminated. After being trained, deer were tested on six different light wavelengths at various intensities to determine what colors of light they can see.

Cohen found that deer see blue colors best and red colors the worst. Deer can also see greens, yellows and UV light, but they can’t differentiate color shades to that extent that humans can.

What this means to a hunter is that you should avoid wearing anything blue. You should also avoid wearing camouflage with a lot of white, because white reflects all colors, including blue. And because deer can’t perceive color shades very well, a hunter wearing camouflage containing many subtle shades of green and/or brown looks just like one big blob to deer. Instead, wear camouflage that breaks up your outline and move as little as possible to avoid being busted.