Is Hunting From the Ground the Future of Bear Baiting? Tips for Revamping Your Strategy

Alberta’s Brad Fenson has been hunting spring black bears in his home province and across western Canada for some 25... 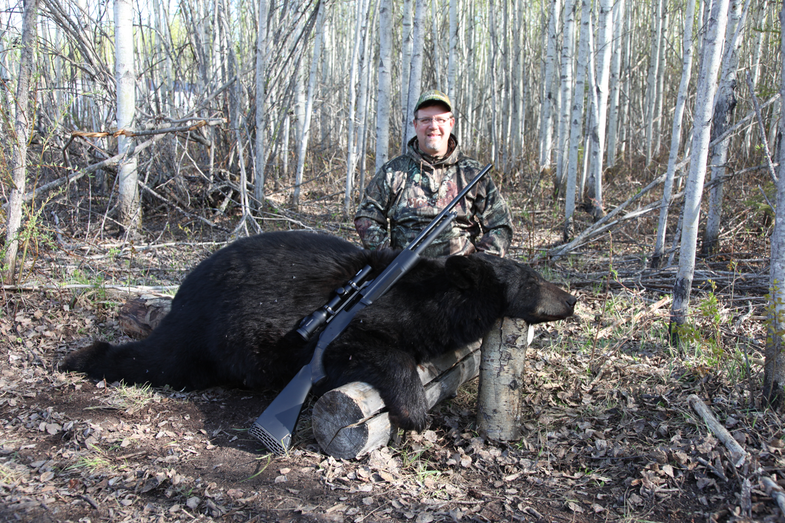 Alberta’s Brad Fenson has been hunting spring black bears in his home province and across western Canada for some 25 years, but he’s recently arrived at what some might find a rather strange conclusion. When it comes to the time-honored tradition of hunting bears “over” bait from a treestand, a wiser approach might be better termed hunting “near” the bait. As in, setting up on ground level—in virtual spitting distance of the bait barrel. Eye to eye. And Fenson’s opinion is far from unique. You’ve likely seen footage of fellow OL writer Tyler Freel hunting black bears from the ground in Alaska. Is a new age dawning?

The Ground-Level Advantage
“These days I do prefer to hunt from the ground, and over the years I have hunted with several outfitters who believe the same thing,” Fenson says. “The fact of the matter is, shooting from an elevated position changes your entrance and exit hole, and several outfitters I know believe that shooting from the ground definitely reduces wounding rates, and also reduces tracking distance, versus their results from treestands. And that’s with clients using both rifles and bows.

“Personally, I have found that black bears come in easier, and are more ‘fearless’ around the bait, when I am on the ground,” Fenson continued. “Whether it’s in a commercial ground blind, or my favorite, just a makeshift natural blind out of available logs and brush. Natural blinds let you have a nice 360-degree view of the area, while commercial blinds [can sometimes] reduce your vision.

Fenson insists the practice of hunting black bears from the ground (in areas where no grizzlies exist) is quite safe, even when a belly-dragging, jumbo-sized bruin waddles into the setup.

“Over the years, most of the times the big ones come in they seem to have one thing on their minds: they want to get to that bait. It’s the little ones that are curious, and I’ve had several of them pick up my scent and follow it right to the blind. They might end up sticking their nose right in the blind. But I’ve never had one lift a paw or be aggressive at all.”

A recent bowhunt in Alberta with several writer friends seemed to seal Fenson’s opinion. The group shot nine bears during the week, all from the ground, and all were recovered after short, mostly routine blood trails. The deadly ground-level, horizontal access to the bear vitals is simply a huge advantage when the goal is a quick, clean kill on thickly haired black bears.

Fenson, who has also spent time as a bear outfitter, has a few other tips for aspiring “do-it-yourself” bear hunters.

Some Favorite Baits
“Typically, I like to use oats, and I might mix them with fryer grease or sugar,” Fenson said. “Oats are great because they’re economical—I typically pay anywhere from $3-9 per bushel—and they’re also a natural product and readily available at feed stores.

“If bears are coming in late, or the hunting is slow, I like to do a ‘beaver drag;’ I tie a skinned-out beaver to a rope, and attach it to my waist, and walk cutlines, or trails leading to the bait, creating a powerful scent trial. Beavers are one of the black bears’ favorite foods. Bears never miss the scent of a dead beaver, and when hunting is slow, using beavers for bait will usually get the bears hitting regularly again.”

Rigging a Bait Barrel
“When I use oats for bait I will put them in a sealed 45-gallon drum, into which I will drill only two holes, and both holes will be exactly 15/16 inch, and on the same side of the barrel,” Fenson advises. “The holes allow the bears to get at the oats, and through trial and error I’ve found that 15/16-inch is the best-size hole for the type of oats I use. Any larger and the oats will pour out on the ground and that’s not good, because if they get wet and swell the bears won’t touch them. Any smaller and the bears get frustrated trying to get them out. I used to drill one hole on each side of the barrel, but I found that will attract two different bears that will ‘tolerate’ each other as they feed separately, and that uses up bait faster. When only one bear can eat, the bears have to take turns, and quite often you’ll get a dominant bear that will literally camp on the bait, to fend off the competition.”

Hunting the Big Ones
“When you’re after a big bear you can’t control your scent enough,” Fenson says. “I like to use rubber boots, and always wear gloves while baiting and hunting. Once on the scene you should walk a straight line to your stand, don’t wander around the area, or walk over and look at the bait. Typically when big bears cut your track they will get on ‘high alert’ right now. You don’t have to work as hard to get a young bear, they come in pretty much whenever they get a chance, but you have to do everything right to bag a big bear.

“I like to use a Thermacell (mosquito-repelling unit) because it helps me sit absolutely still. Those big bears, I’ve seen it many times, they will often get near the bait and simply lay down and listen; I’ve also seen them stand up from about 70 yards away and just watch. They might hang out there for an hour or more. If you’re fidgeting when one does that, you’re done. He’s not coming into that bait in daylight.”