Although we had a pretty early “breakup” here in interior Alaska, the bear baiting action is quite a bit slower... 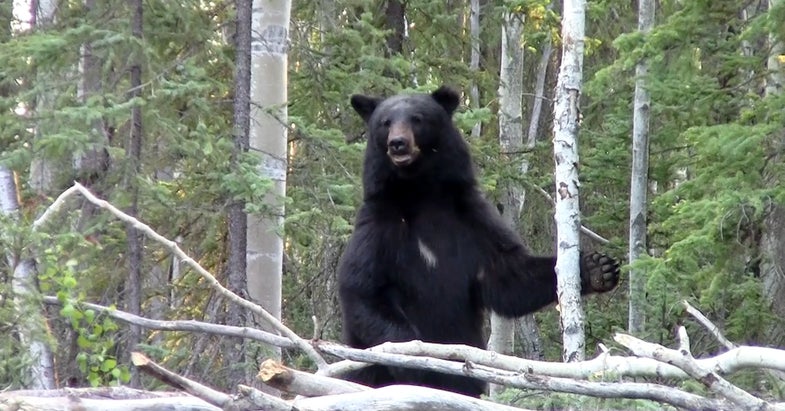 Although we had a pretty early “breakup” here in interior Alaska, the bear baiting action is quite a bit slower than normal in my usual spots. It’s a little unexpected and frustrating as my buddy Nick Muche and I have been chomping at the bit for some time.

Fortunately for us, we made our first sit of the year on a bait Nick established last year up north of Fairbanks at the end of May. As you saw in the blank bale form video, Nick is primarily a compound shooter, and a good one at that. About three weeks ago we were goofing around shooting and he tried my long bow. Seeing how well he was shooting after 20 minutes, I told him “you know you have to kill a bear with that this spring now right?”

Well, after setting him up with one of my dad’s recurves, and a few weeks of practice, he was shooting exceptionally well for the amount of time he’d had to practice.

After letting the bait sit for three weeks, we weren’t surprised there were bears on it. But we were surprised that there had been bears on it all day and night, every day, for more than two weeks. Even though the wind was swirling really bad, we decided to give it a shot anyway.

Nothing showed up until around 8 pm, when a big sow with two cubs came in to the bait and provided some entertainment for a while. Although she was a legal bear because the cubs were a year old, her belly was totally rubbed out, and it’s a good idea for population longevity to leave a big sow that can take care of her cubs. After a while, the cubs were on their way over to investigate the blind, so I huffed at them and the sow hauled them out of there.

Another windy couple of hours later, we saw a bear coming in and instantly knew he was a good boar. Although the wind had him pretty spooky, he eventually came in to the bait. Now, I didn’t remember that the barrel he was walking by was only a 30 drum, and he was nearly twice as tall as it was wide. Thinking it was a 55 gallon, I couldn’t believe how big he was (I later realized my mistake and knew that he was just a really big bear, not an unreal monster bear).

The bear didn’t take long to present a shot, and Nick is the first to admit that he didn’t do what he knows how to do, and luckily had a clean miss on the bear. The boar immediately jumped over the “crib” of logs piled up and stopped about 10 yards back, not knowing what had just happened. We knew he would come back, and it didn’t take long. Nick gathered himself very well and at the next opportunity, zipped a perfect double lung shot through him.

We sat several more hours in hopes another of the big boars would come in, but only saw another sow. After climbing out of the blind, we found Nick’s big boar in about two minutes. Although I had initially been mistaken, it was still a dandy bear, and should square right around 6’7″. After some photos, skinning, and butchering we packed the bear the two miles back to the truck just in time for morning coffee. (Remember the blog about walking in farther than other people are willing to go?) It was an awesome and rewarding night, and one I and I know Nick will remember for years.