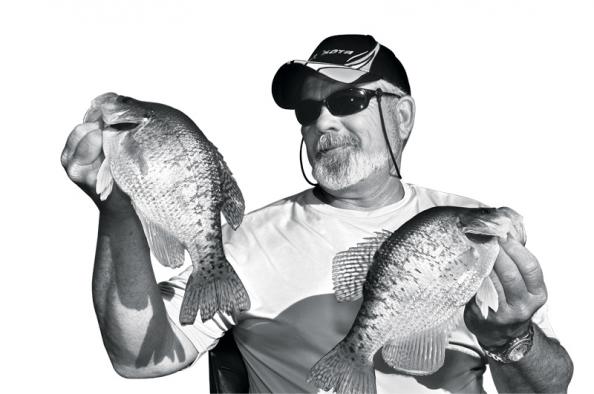 Sam Heaton, who has been around fishing all his life, spent 25 years as a crappie guide offering crappie fishing tips on Alabama’s famed Weiss Lake. In time, he moved along in his fishing career, and now he is one of the primary in-the-field men for MinnKota and Humminbird.

But Heaton still knows crappies, and he catches them across America like few others can. In fact, his instructional Crappie Fishing Techniques remains one of Bass Pro Shops’ best-selling DVDs of all time–more than 25 years after it was introduced.

Although spring is often heralded as the top time for catching spawning fish, Heaton believes that the true key to spring crappie success is understanding the subtle differences in spring spawning phases.

Water temperature sets up the drama. The optimal temperature for spawning varies according to lake size, depth, and water clarity, current (in a river), and other factors. But generally, crappies spawn when water temperature is between 57 and 65 degrees. Here are Heaton’s tips for catching crappies through all three spawning phases.

Pre-Spawn
When fish are staging for the spawn, they’re often at river outlets, major creek mouths, points, or near big coves.

Cold water means that fish will be where the most oxygen is–usually suspended off structure drop-offs. In shallow southern waters, they may be down only 6 to 8 feet. In deeper northern reservoirs, they may be at 15 to 25 feet. Sonar is vital to locating suspended fish in order to present lures correctly.

Heaton long-line trolls for pre-spawn fish, using a wide spread consisting of multiple rods (check your state regulations) measuring 8, 10, and 14 feet to prevent line tangles. Employing 6-pound-test line, he rigs two jigs to each rod–a 1/16-ounce jig at the line end, and a 1/24-ounce jig 18 inches above the heavier lure. He prefers a wide variety of dark and brightly colored tube jigs while trolling to offer crappies variety.

Heaton slow-trolls with an electric motor, using just enough power to keep slack out of the lines, presenting jigs about 2 feet above the crappies he’s located on sonar. Trolling speed is important. He either increases or decreases the pace according to the air temperature. Speed must be increased as the sun warms the water in the afternoon and makes fish more active. This is especially true on off-color lakes, where suspended sediment particles absorb the sun’s rays, increasing water temperature faster than in clear lakes.

Spawn
Visible cover, in water 3 to 7 feet deep, is a prime location for actively spawning fish. But there are some deep, clear mountain lakes that can have spawning crappies down to 12 to 14 feet. Thus, an angler has to know and understand the lake or river he’s fishing, and how crappies relate to structure and the kind of places they may head to spawn.
Some of the best spots include boat docks, brush piles, weed beds, and bridge pilings.

A few days of a mild warming weather trend are ideal, especially once pre-spawn fish have been holding on the spot. Such weather triggers crappies to move shallow to spawn near cover, where they can be worked over using a 10- or 12-foot rod.

When crappies are spawning in shallows, they’ll be very active and often break the surface with their tails, showing their location. It’s not a jump–just a fin flip at the surface. Watch for it when conditions are right.

With a long rod and the same type of tube jigs he uses for trolling in the pre-spawn, Heaton probes a wide range of shallow cover sites that hold active fish, while moving slowly along with his electric motor.

Post-Spawn
Once the spawning urge subsides, crappies will move to the first major structure drop-off. Some structure-holding crappies are in only 8 feet of water; other spots may have fish down to 25 feet. Crappies are hungry now and often are positioned near large shad schools, on which they feed. He employs both minnows and jigs, because minnows produce crappies when jigs won’t. But jigs can catch more crappies faster.