Not many women would be comfortable with the world knowing how much she weighs. Then again, not many women can... 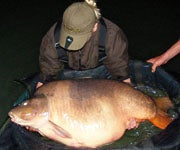 Not many women would be comfortable with the world knowing how much she weighs. Then again, not many women can claim to have caught a carp that weighs almost as much as she does. Jo Green can — this week she smashed the world record for a carp caught by a woman by 12 pounds. She reeled in a monster 84-pound carp; a fish she admits weighs almost as much as she does! Better yet, she did so in front of her avid angler husband Mike.

The British couple was sleeping in a tent during a fishing trip in France when the alarm attached to one of their reels rang out at 4 a.m. Jo rushed to the bank to take the rod. The fight lasted 45 minutes. The fish she landed set a new record and beat her husband’s personal best by 62 pounds.

After weighing and taking pictures with the carp, known locally as Brown Fish, the fish was released unharmed. Jo told the Sun of her accomplishment, “I am over the moon about it. It was a real beauty.”