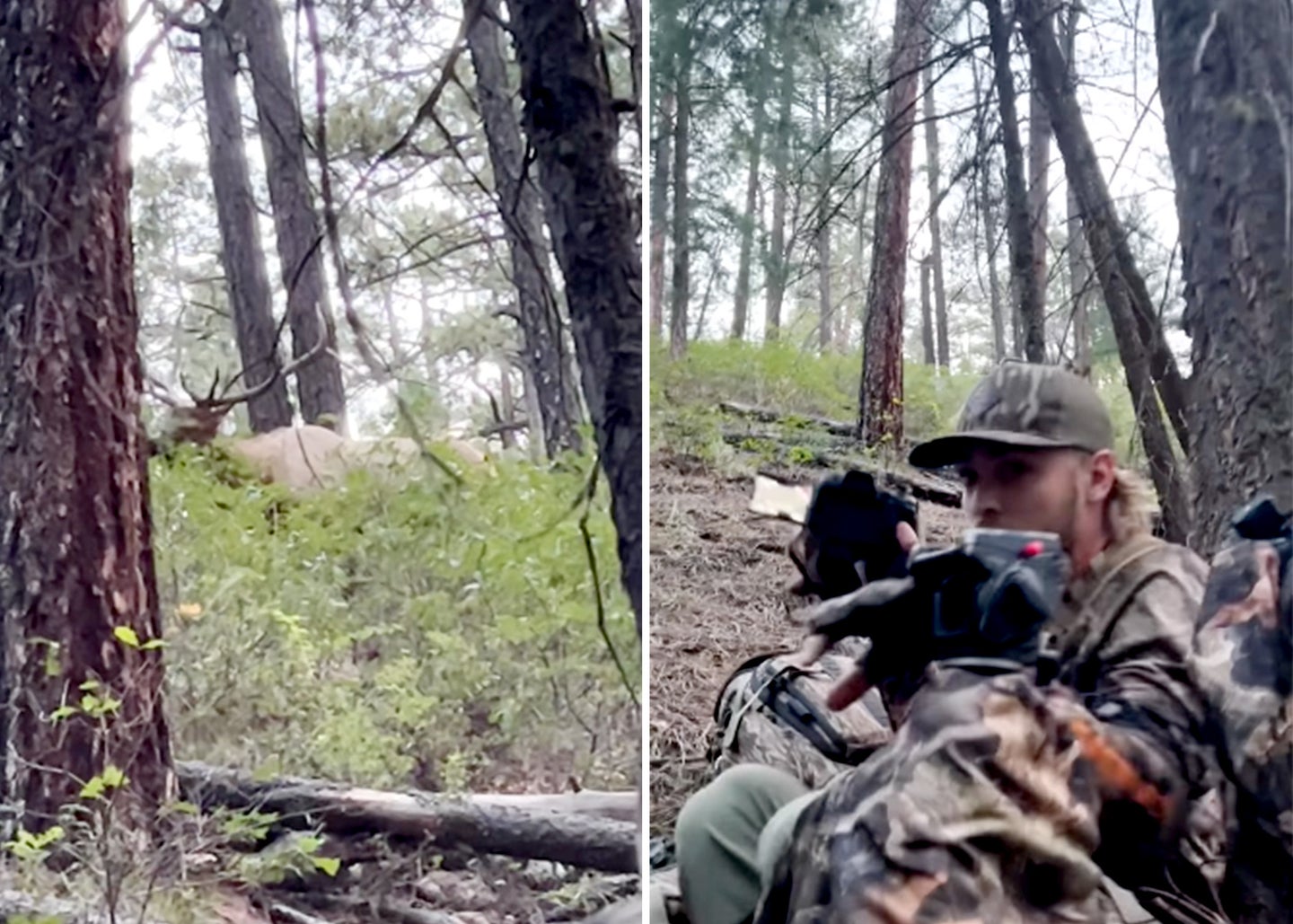 After shooting the bull at close range, Shawn Luchtel and his cameraman moved out of the bull's way as it rolled downhill toward them. Shawn Luchtel
SHARE

Heartland Bowhunter host Shawn Luchtel recorded a heart-pounding video last week while bowhunting in New Mexico. The video, filmed from Luchtel’s point-of-view, shows him arrowing a big bull at close range. Within seconds, the 5×5 hits the ground and rolls downhill right toward him and his camera man.

“Chandler, get up! Get up! Get up!” you can hear Luchtel saying to the cameraman as the bull tumbles toward him.

“It was wild,” says Luchtel, who was filming a future episode of Heartland Bowhunter. They were hunting with Hunters New Mexico, an outfitter based in Albuquerque.

The video starts with Luchtel going to full draw as the big bull runs into the frame. After Luchtel makes a good shot, the bull trots off a short distance before hitting the ground and rolling downhill right back at them. At the end of the video, Luchtel paces off the distance from where the hunters were standing to where the bull came to rest. It was roughly 8 steps.

READ NEXT: Make the Perfect Archery Shot on a Giant Bull Elk

Luchtel says this was the second time he’s drawn a bull tag in that unit. The last time was a few years ago, and after hunting with the same outfitter for about a week, he never got a shot opportunity. So last week he went back to northern New Mexico with the intention of tagging a big bull and filming a full episode. Judging by the footage they captured, the crew was successful on all fronts.

“That morning was the very first day of the hunt, and it was action-packed,” Luchtel says. “We called in a couple smaller bulls and passed on them, and our plan was to hunt a waterhole nearby.”

After checking recent trail camera photos, which showed some good bulls coming to water in the early afternoon, Luchtel and the crew made a move and set up at a different waterhole around 2 p.m. They heard bugles all afternoon, and a little over 5 hours into the sit, they watched a small bull come into the waterhole. The bull drank for a while before suddenly jumping out of the water and trotting away like he was spooked.

The crew then watched the small bull chase a cow out of the trees. After that, a bigger bull showed up. The two bulls were sprinting downhill on a trail that led right to the hunters, and Luchtel says he knew right away that whatever was going to happen next was going to happen fast. He drew and watched the bulls run right at him.

“This bull comes flying out of the brush, cuts off the small bull, and that’s when I was at full draw,” Luchtel says. “I was trying to stop him, but he had no idea we were there. He just happened to stop right in my window and bugle from 13 yards. I ended up making a great shot. He trotted 10 about yards, stopped, looked around, fell over and rolled right down to us basically.”