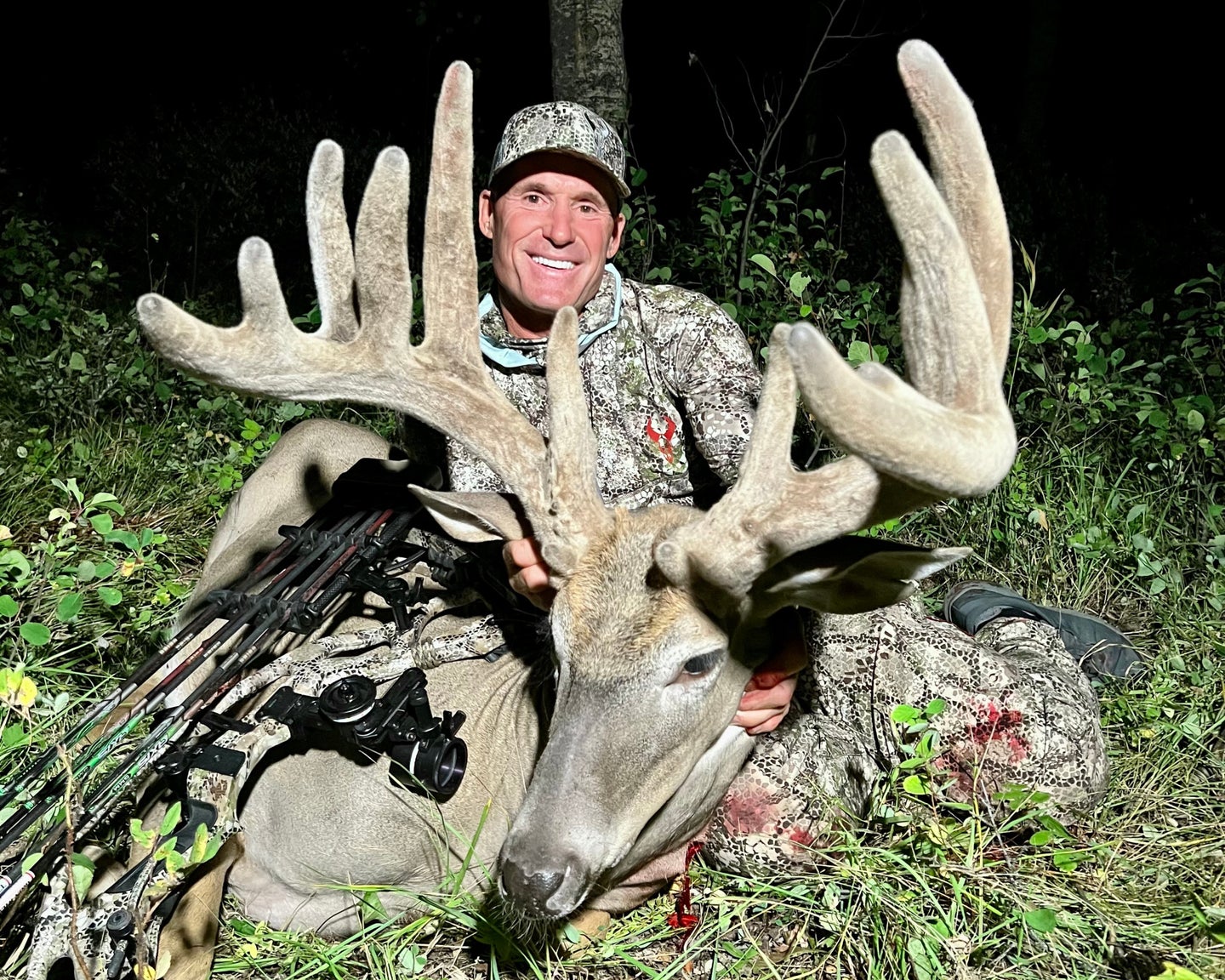 John Cassimus had almost called it a night when this whitetail came running right at his treestand. John Cassimus
SHARE

John Cassimus really loves hunting mule deer. The Birmingham, Alabama, native grew up with a whitetail obsession that transformed into a mule deer obsession when he started hunting in Alberta around 2006. So when a nontypical whitetail with muley-esque bodyweight and massive antlers came trotting toward his treestand in the last five minutes of Alberta’s shooting light on Aug. 31, he couldn’t believe his luck. Could this deer be the best of both worlds?

One 20-yard spinal shot dropped the buck where he stood and a follow-up shot finished the job. Cassimus, a 55-year-old Hoyt pro staffer and entrepreneur, had the whitetail of a lifetime on the ground.

“I sent Isaac Aleman [of Black Rifle Coffee Company] a picture last night and he goes, ‘man, that is an awesome muley,’ and I go, ‘Isaac dude, that’s a whitetail,’ and he was like ‘you’ve got to be kidding me,'” Cassimus tells Outdoor Life.

Cassimus puts a lot of on-the-ground scouting effort into his Alberta deer hunts, and after tagging a 212-inch mule deer buck there last year, he was hoping for a repeat this season. But after putting 2,500 miles on his odometer driving from Alabama to Alberta (say that five times fast) to scout for 12 days, he hadn’t located a mule deer that piqued his interest. He had also set out some cameras for whitetails, which produced a few pictures of this muley-like buck.

“He wasn’t being real consistent about what he was doing. He would be on one end of the field coming in in the evening and then the other end and I just couldn’t get him patterned,” Cassimus says. “So I hunted him twice. The first time I hunted him, he came in right around dark and it was too late and he was like 300 yards from me, so I didn’t even have a chance.”

By the end of the week, Cassimus had given up on finding any mule deer, so he went back to that stand for the final night sit. The evening was almost over when he finally called for a ride.

“It was going to take 20 minutes or so for them to get us, so I just turned to my buddy and we started talking and it got kind of windy. We were in between some alfalfa and some peas in a little stretch of woods. And I looked up and these deer were running through there,” Cassimus recalls. “I don’t know if something had spooked them or whatever, but then they jumped the fence. And the next thing you know, within like 30 seconds, I’d shot him at 20 yards right up under the tree stand.”

Only when Cassimus approached the deer did he realize the size of the buck he was working with. And make no mistake: this deer wasn’t just fat.

“He was just so big. He stood the height of an elk. His lower leg from the joint down, I would say is more than 27 or 28 inches, like just insanely long. It didn’t even look normal, you know?” Cassimus says. “We figured the deer was going to be around 160 to 165 [inches] when we looked at it on camera, but then we just didn’t realize the deer was 300 pounds on the dot and it was so big and so tall that when we walked up to him, we were just kind of in awe … especially from the mass standpoint. The deer had over 53 inches of mass.”

Cassimus is a devout mule deer conservationist and avid big-game hunter with a long season ahead of him. But this whitetail will forever stand out. The velvet buck ended up measuring 187 1/4 inches.

“I was just super lucky,” Cassimus says. “It was pretty awesome.”