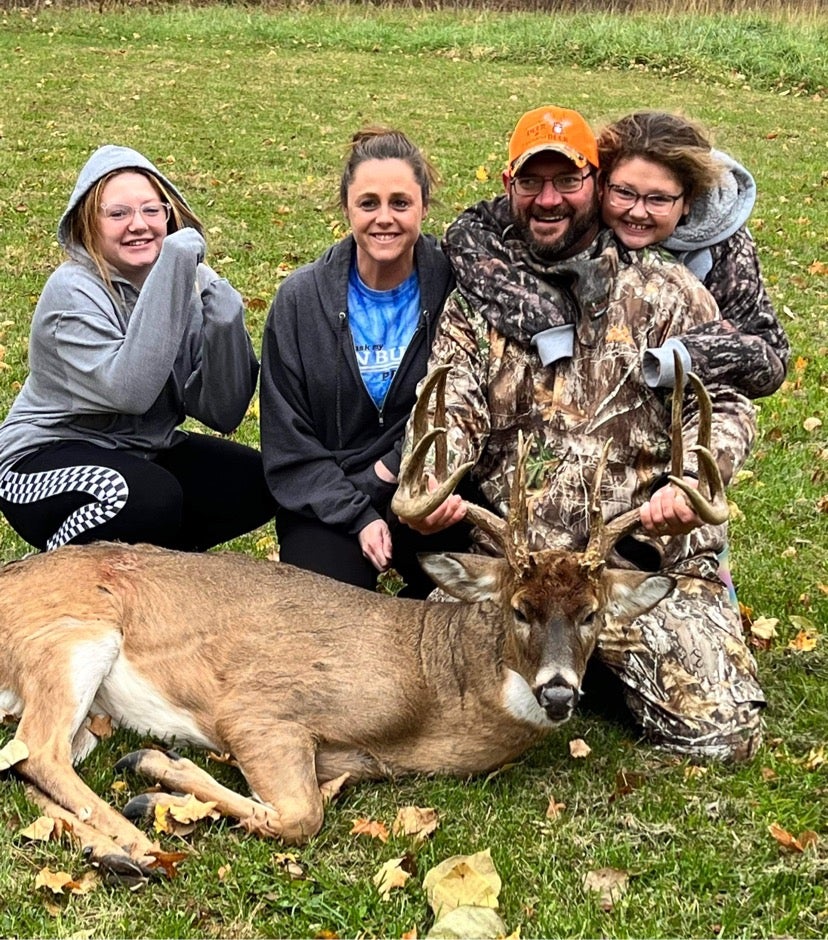 It was a family affair for the Isons when they finally closed the deal on a familiar buck. Jeremy Ison photo
SHARE

Jeremy Ison was regularly getting trail camera photos last year of a heavy-antlered buck on 110 acres of private land in Putnam County, Indiana.

Every time Ison and his wife Kristi checked cameras and saw photos of the buck, Jeremy kept telling Kristi “he’ll be back.” That’s when Kristi named the deer “Arnold,” referencing the famous Terminator movie quote from Arnold Schwarzenegger. The Isons, plus their young children Larissa, 11, and Brooklynn, 9, monitored the buck all summer with trail cameras, moving cameras often to pattern the buck. They learned the deer was bedding in a small impenetrable jungle they called the “Honey Hole.” Jeremy set stands around its edges trying to tag the buck during Indiana’s bow season.

“I saw him several times with my bow but couldn’t get a shot I was comfortable making,” says Jeremy, 39. “I was running out of time, as gun season was approaching, and neighbors were seeing Arnold and talking about him. I hunted hard the last week of bow season but could never seal the deal.”

Indiana’s opening day of gun season was Nov. 13, 2021. It was cold, wet, and windy. Jeremy hunted anyway, set up in a gun stand farther from the Honey Hole, with the wind right and holding his .308. From daylight to mid-morning he saw does and small bucks, and by the attitude of some of the bucks he believed a hot doe was in the thicket, as the rut was underway.

“At 10:28 a.m. Arnold just appeared with one of his girlfriends in the thicket,” says Ison. “I pulled my binoculars up, guessing he was 60 yards out, then took the shot. He completely disappeared.”

Ison was confident he made a good shot, and stayed in the stand for 20 minutes before checking the place where the buck stood.

“I couldn’t take it anymore and climbed out of my tree to see if I could find blood,” he said. When Ison reached the spot where the buck had been, he jumped a doe, which he figured to be the hot one the buck was trailing. He looked down and there was Arnold just 10 feet away, dead in its tracks from the .308 bullet.

“I immediately called my dad, Glenn, who was hunting at another farm, and told him that I had got Arnold,” Ison remembers. “While waiting for my dad to get there I called my wife Kristi. My daughter Larissa answered the phone. Shaking I said, ‘I got him baby! He’s a monster’!”

The whole family arrived and loaded the buck into an ATV, laughing, hugging and high fiving.

The massive 17-point whitetail was only 3.5 years old, but weighed just under 200 pounds, with a green rack score of 196.5 inches.

“I am incredibly blessed with my buck of a lifetime,” says Ison.