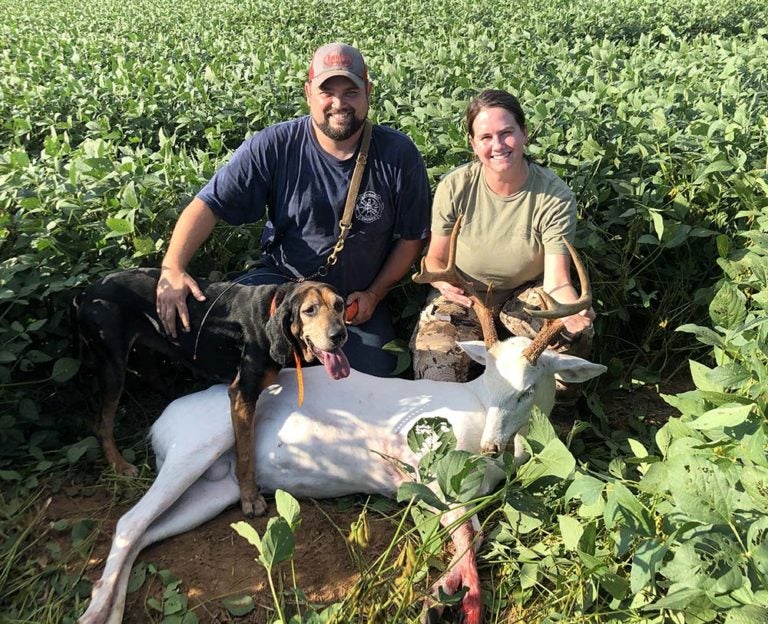 Tara Jackson's all-white 8-pointer is the buck of a lifetime.
SHARE

Tara Jackson was fishing a pond with friend Bryan Spivey in June when she spotted an all-white buck crossing a nearby field. The duo had never seen such an unusual deer, and both hoped the buck would stay in the area until Georgia’s archery deer season opened Sept. 11, 2021, according to Georgia Outdoor News.

They set up trail cameras in the area on family-owned land to find out if the white buck was living there. Sure enough, it was, and Jackson spotted the deer again in late June. She began patterning the 8-pointer with trail cam photos through the summer and into September.

As Georgia’s archery bow season approached, Jackson confirmed the white buck was still in the area with trail cam photos of the 8-pointer in the late stage of shedding its velvet. No other area hunters or family members had seen the white deer, and Jackson set on hunting that specific deer.

She hunted a stand in the white buck’s travel area on opening day, Sept. 11, but saw nothing. She was back on stand the next morning, and passed several deer, including another buck, but waited for the white buck to show. Finally, it did, but Jackson missed the shot with her Ravin crossbow, the bolt sailing over the white buck’s back.

Disappointed, but determined, Jackson stayed on stand and shortly the buck circled back and walked directly beneath her, where she made a kill shot.

The buck took off, and Jackson got help tracking the white deer from her friend Bryan Spivey. The trail was difficult to follow, so they contacted Allen Barrett and his 9-year-old bloodhound to find a the deer.

A half-mile of slow tracking resulted in Lily (the bloodhound) discovering the dead buck in a soybean field.

The buck is not a true albino, which is about a one in 25,000 deer rarity. The mature 8-point buck does not have pink eyes, so technically is a piebald or leucistic deer, which are usually white with brown splotches mixed in. Jackson’s buck is completely white, except for a small brown spot on the tail, and has black hooves and a black nose.