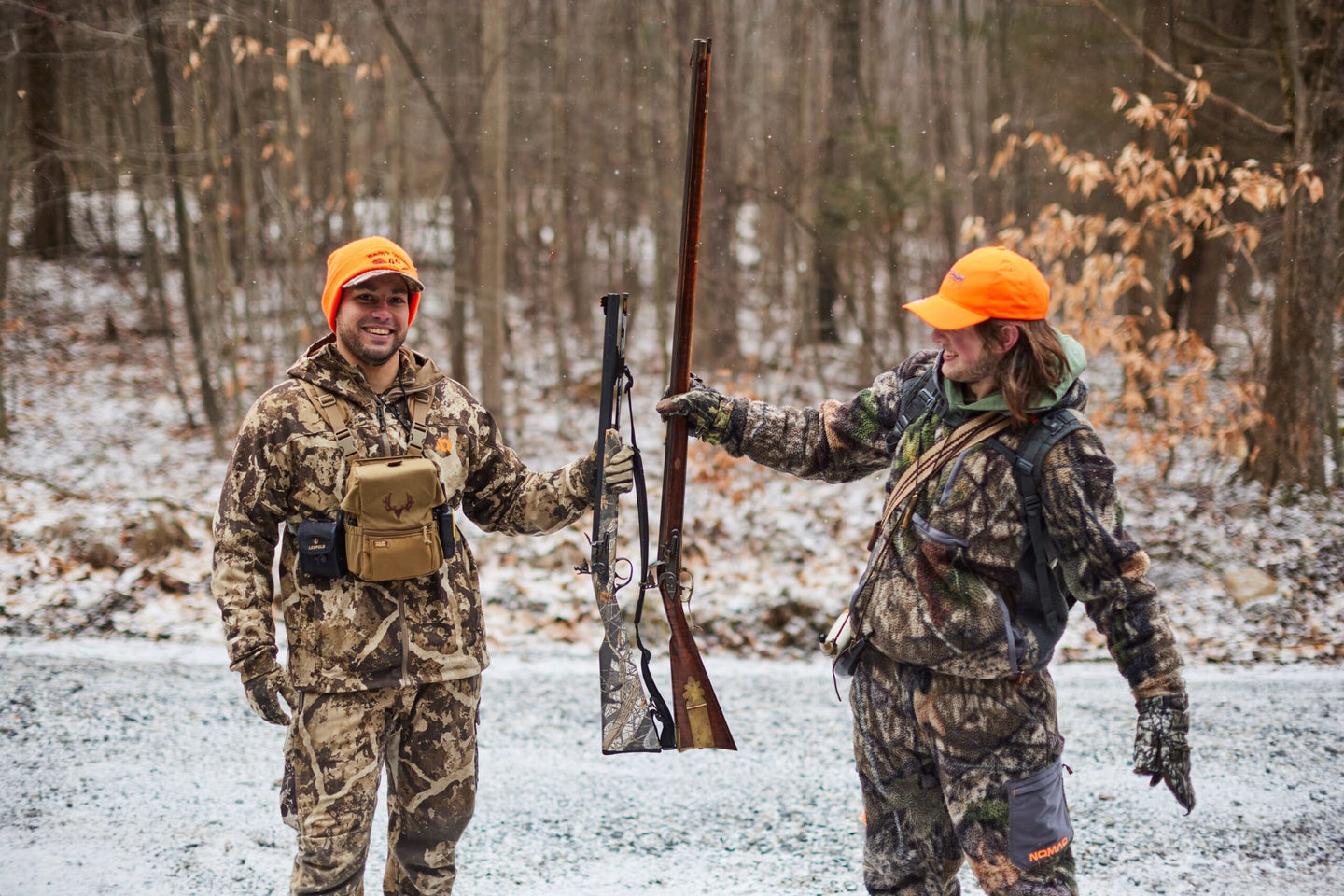 The author (left) and Brayden March comparing a modern Traditions PA Pellet Accelerator flintlock to an old custom-made long gun. March’s grandfather gave the gun to his grandson when he turned 12—the minimum hunting age in Pennsylvania. Henry Hung

Photos from Pennsylvania’s Flintlock Season, the Last of Its Kind in the Country

Modern muzzleloaders are increasingly convenient and accurate, but Pennsylvania deer hunters know their flintlock-only season is well worth the effort

AS THE FINAL HOLDOUT state to maintain a flintlock-specific muzzleloader season, Pennsylvania’s big woods are full of tradition and smoke from the day after Christmas until the middle of January. It’s a season where modern tech like synthetic stocks and sabots clash with century-old rifles that rely on real flint and loose powder.

There’s nothing quite like the feeling of walking through the woods with a weapon you’re not entirely confident in. Sometimes, when you’re unaware that your powder is wet, you could spend an entire day slipping around the woods with a fancy stick—and be just as effective. On the rare day, perhaps one season out of every five, when you stalk through the open hardwoods and make a perfect 30-yard shot on an unsuspecting doe, you’ll feel like Daniel Boone.

Most hunters are familiar with the Kentucky rifle. Fewer hunters know it by its original name: the Pennsylvania rifle. Immigrants to what is now Lancaster County, in southeastern Pennsylvania, are credited with its development. German settlers who emigrated with their native country’s shorter Jäeger rifles began to improve on the platform in the early 1700s by lengthening the barrel and downsizing the caliber, among other modifications. The resulting Pennsylvania rifle was used by soldiers in early American conflicts from the mid 1700s through the early 1800s, including the Revolutionary War.

Of course, settlers and frontiersmen also relied heavily on the Pennsylvania rifle for hunting. Today, plenty of modern deer hunters relish Pennsylvania’s enduring flintlock season, relying on traditional tactics like still-hunting or the teamwork of a massive coordinated deer drive. Others object to its exclusion of inline muzzleloaders, which are more accurate than flintlocks and can kill deer at farther ranges. In 2002, the Pennsylvania Game Commission expanded a separate three-day flintlock season in October to include inline muzzleloaders. That hasn’t fully appeased inline hunters (it’s a doe-only season), but it has prevented major changes to the traditional late-season flintlock hunt—for now.

As a Pennsylvania native, I look forward to this hunt all year. Our state has plenty of hunting traditions but this one is unlike any other. It’s hard not to appreciate the flintlock season for precisely what it is: a low-odds, late-season grind that pays homage to our state’s hunting heritage.