What If Grizzly Bears Killed as Many Hunters as Treestand Accidents Do?

For most of America’s hunters, gravity is far more dangerous than any bear. It’s time to start taking personal protection in the deer woods seriously 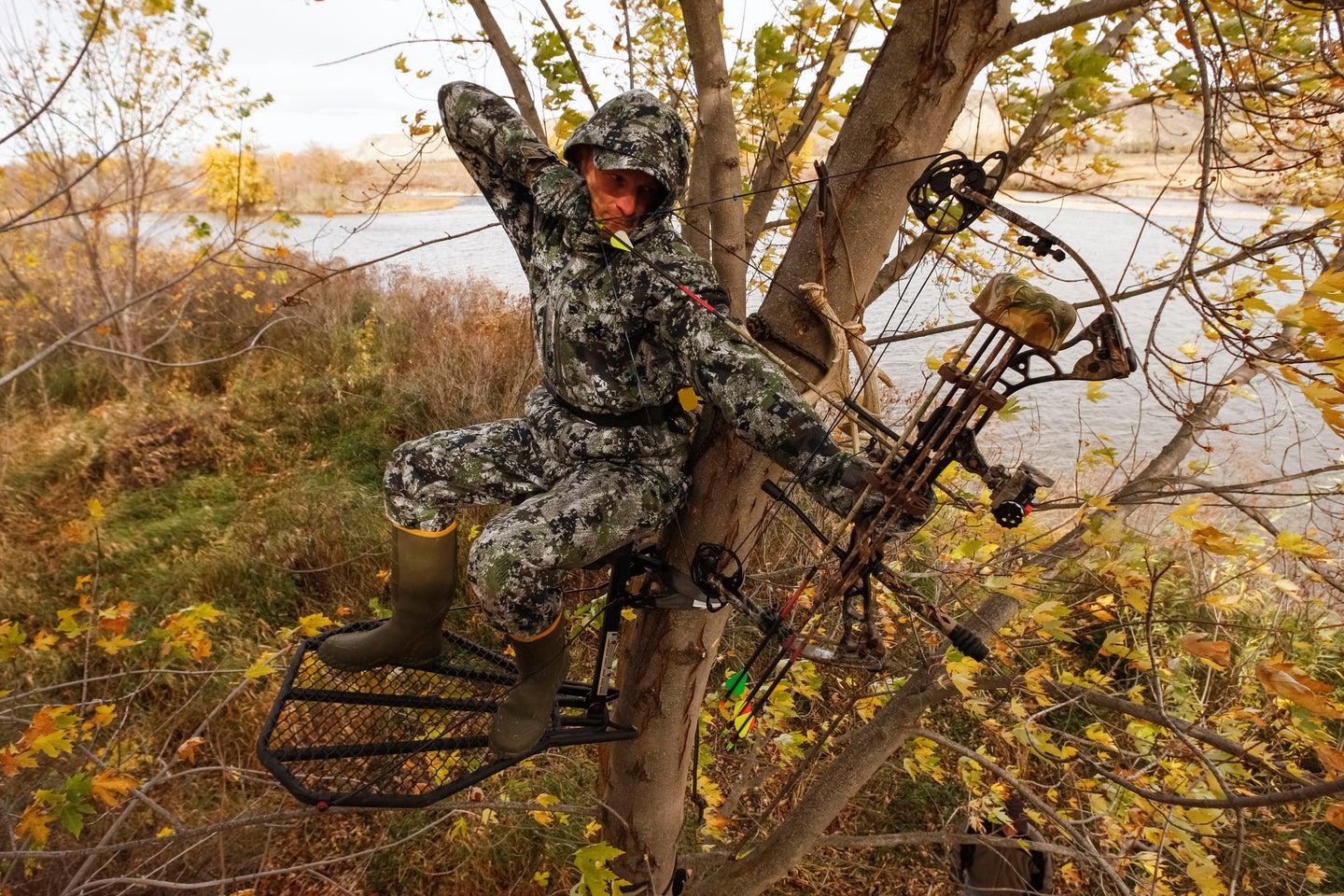 Treestands are incredibly safe with the right gear and know-how. Getty Images
SHARE

We love to debate the best handguns for bear defense, dive into the terminal ballistics of various bear loads, and critique every method of carrying a pistol in grizzly country. But most of us will never be charged by a bear. Hell, many of us never even hunt in bear country. On the flipside, outdoorsmen generally give little consideration to the most dangerous thing we actually do every hunting season: Climb into a treestand.

The statistics are just as shattering as that 20-foot fall will be. The International Hunters Education Association estimates that 300 to 500 hunters die each year from treestand falls, according to a story last year by the Milwaukee Journal Sentinel. The association also estimates that another 6,000 hunters sustain injuries from falls out of elevated stands.

Wearing a safety harness certainly helps prevent accidents, but a harness alone is not enough. That’s because the majority of falls happen while hunters are climbing into or out of their stand (and many hunters only secure a harness after they’re in stand). Plus, aged and weathered treestand straps break. One moment you’re stepping onto the platform, the next thing you know you’re on the ground, maybe with a broken back. There is no time to catch yourself.

A news report out of New York looked into the details of 13 treestand accidents during the 2020 hunting season. It’s a small sample size but it still offers some important takeaways:

Imagine, for a moment, if grizzly bears killed 500 American hunters every fall. Imagine the news headlines and regulatory actions. Every time there’s a grizzly attack, national stories run (OL has been covering bear attack stories for more than a century). Imagine the training that backcountry hunters would undergo and the firepower we’d arm ourselves with for protection. Many hunters would be too fearful to even enter grizzly country at all. The risk simply wouldn’t be worth it. For context, there were four fatal grizzly bear attacks on record in North America in 2021. The all-time high number of grizzly encounters that resulted in injury in the Greater Yellowstone Area is 14, according to an in-depth report on grizzly attacks by OL earlier this year.

And yet, hundreds of hunters fall to their deaths each season—silently. Many of us can’t even be bothered to wear a safety harness, let alone a lineman’s belt or a lifeline.

It doesn’t have to be this way. With a little knowledge, maintenance, and the right equipment, your treestand will be a safe, useful hunting tool, not some deadly predator lurking in the woods. Here’s what you need to know.

How Long Does a Treestand Strap Last?

Most hunters do not carefully read their treestand manual. This can be problematic, because manufacturers are clearly telling us that stands won’t last forever without maintenance, but we’re acting like they will. We’re walking right by that “be bear aware” sign without even acknowledging it.

John Louk has been the executive director of the Treestand Manufacturers Association (TMA) since 2002. He told Outdoor Life that in the infrequent case that a treestand accident gets investigated, and in the even rarer case that the accident was a result of the stand failing (and not just the hunter installing it improperly or tossing the harness aside), most of the time it’s because the stand wore down after persistent exposure to the elements.

“A lot of times, [hunters] leave the stand in the tree for an extended period of time, and they expect it to last for a lifetime,” Louk says. “We have seen stands grown into trees. [Hunters] don’t consider tree growth, UV rays and change in environment, humidity and rain and snow, all year round. Straps break because they didn’t remove the stand regularly and inspect it.”

If a hunter does take good care of their stand and remove it when it’s not in use, treestand straps should last about two years. But such standards are set by the manufacturers themselves, while the TMA only sets standards for full-body harnesses.

“All the straps that involve hanging a stand, most manufacturers require replacing them every two years. But here’s the problem: Consumers do not understand the testing requirements for components of tree stands. They don’t value the standards being set by the manufacturer because they will allow a strap to stay installed continuously for five or six years, to the point where the strap is under stress for an extended period of time.”

The takeaway here is simple: replace your treestand straps every two years, whether they seem worn or not. Rich Chomik, senior staff consultant for engineering and consulting company Stress Engineering can put science behind this instruction. Stress Engineering does in-depth testing and studies on treestand performance and safety.

“Polymers are a material class that degrade with U.V. exposure, with weathering exposure, and they have a ‘creep value,’ or they elongate slowly over periods of time under their own weight,” says Chomik. “Someone might go out to hunt and if the strap hasn’t been removed or cared for, they might find the strap is a little loose, so they’ll just tighten it up a bit. Well, that strap was tight when they installed the stand, but it might have creeped into a looser position, and then they tighten it again, so the cycle just repeats itself and eventually, you have a failure. Straps are one of the more vulnerable components of a treestand.”

Chomik tells Outdoor Life it’s impossible to give a solid answer for how long an average treestand strap lasts, since every make and model is different. But he encourages treestand users to look on the company’s website or reach out to their customer service team to determine what the life expectancy of the straps are. As for the biggest Achilles heel of all polymer treestand straps, Chomik’s answer is something that’s almost unavoidable: the sun.

“U.V. is the enemy of straps. It’s a really powerful damage mechanism for polymers. You don’t want your polymers in direct sunlight,” Chomik says. “You’ll have straps that have been left out in trees for a long time that you can pop off with your bare hand, there’s just no strength left. And God forbid people are relying on that strap for support in that stand. We really need to get this message out, that this is a solvable problem. You just can’t neglect it.”

There are three pieces of equipment that treestand hunters need for every set: safety harness, lifeline, and lineman’s belt/rope.

The best treestand harnesses are easy to use, comfortable to wear, and prevent you from falling to your death. The harness is the first step; wear it always. But you must pair your harness with the following two pieces of equipment to avoid falling when you’re hanging your stand, and when you’re climbing into it.

There are a variety of lifelines out there, but the model made by Hunters Safety Systems is the most popular. This is a simple line that you secure above your stand and runs to the ground (secure the bottom of the rope to your tree or a climbing stick so that it’s taught). Along the line slides the prussic knot, which you clip your harness tether to. You clip in before you climb up (slide up the prussic knot as you climb) and stay tethered during the hunt and when climbing down. When you’re in your stand, slide the knot high, so that your harness tether is taught. This will prevent you from falling, and it will keep the line out of your way when you draw your bow. (See the video below.)

For years I hung stands without using a lineman’s belt. That was idiotic. Hanging stands and taking them down is one of the most dangerous aspects of treestand hunting, if you don’t use a lineman’s belt. Not only does a lineman’s belt (or lineman’s rope) help prevent you from falling, but it also allows you to comfortably stand on climbing stick step hands free, which makes it much easier to work on the stand. Lineman’s belts are especially popular among the tree saddle crowd. Tethrd makes a slick one that works just as well for treestand hunters who are hanging stands and fastening climbing sticks. You simply connect it to your harness instead of a saddle.

There is inherent risk in any type of hunting. We must accept that risk every time we step into bear country or make that first step onto a climbing stick. But it’s our job as self-reliant outdoorsmen and women to accurately calculate risk, prepare for it, and then use our best tools and skills to minimize it. So when you’re headed to your treestand this deer season, just make sure that you’re loaded for bear.