Someone Poached This Big Pennsylvania Buck Near a Federal Prison

After the deer was discovered lying in a field in central Pennsylvania, law enforcement is asking for the public's help 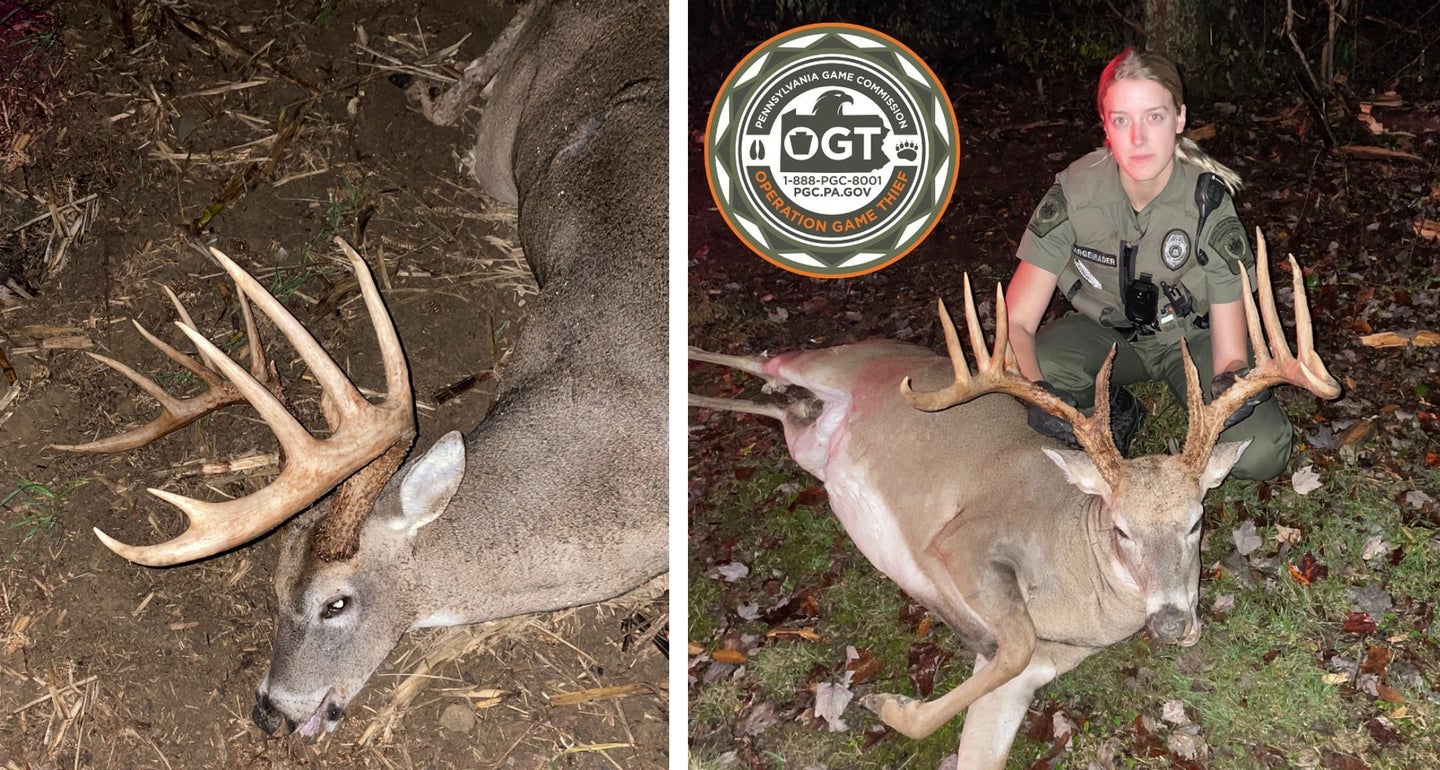 The trophy-class buck was discovered in a field in central Pennsylvania. Pennsylvania Game Commission
SHARE

Officials with the Pennsylvania Game Commission are seeking help from the public after a 178-inch buck was discovered dead in central Pennsylvania’s Union County.

When someone called in a tip on Oct. 3 and said they’d heard a shot well after legal shooting light in Gregg Township, the Northcentral Region dispatch reporter called game warden cadet Brooke Hargenrader to investigate. Upon arriving at the scene, she discovered a trophy-class buck lying dead in a field along Route 44, near the federal Allenwood penitentiary.

Her investigation concluded that the buck had been shot with a small caliber firearm around 11 p.m. that evening. The meat was salvaged and donated to a needy family in the area. It’s not immediately clear why the buck was abandoned.

“It’s tough to say at this point,” says Hargenrader. “It did appear that they had shot and left it. For some reason, they never came back for it.”

It’s possible, she acknowledges, that the poacher fled the scene when law enforcement arrived rather than attempting to recover it and risk apprehension. No vehicle was identified at or departing the scene, and game wardens are relying on public information to help identify a possible suspect.

“We are heavily relying on the public for additional information,” says Hargenrader. “They are the backbone of everything that we hear within the local community, so anything that they can reach out and give us as far as this investigation goes would be greatly, greatly appreciated.”

Read Next: Pennsylvania Game Warden Frees a Tangled in a Net by Shooting Its Antler

The PGC is urging anyone with information that might help identify the poacher or poachers involved in the incident to contact the agency’s Northcentral Region by phone at 1-833-PGC-WILD. The Operation Game Thief Hotline will also work (contact details here).

Although some states determine poaching fines and punishments by the score of the deer that was poached (in other words, the bigger the buck, the bigger the penalty), Pennsylvania does not use a scoring system. Because the buck in question was a “trophy-class” deer, however, there are additional fines that can be tacked on to the charge of illegal take itself. That decision is usually at the discretion of the judge, says Hargenrader.

“Multiple tips have been received from the public that are currently assisting in this case, but we are still looking for more,” the PGC announced on Oct. 20. “The trophy buck received an official Boone and Crockett gross score of 178 and 4/8 inches. The minimum score needed to be considered trophy class is 115.”

Last year Pennsylvania saw 6,359 prosecutions for wildlife violations, according to the PGC’s 2021 report. The single largest category among those was the illegal take of game or wildlife, with 1,430 total violations.

This story was updated on Oct. 27 to include the buck’s score.