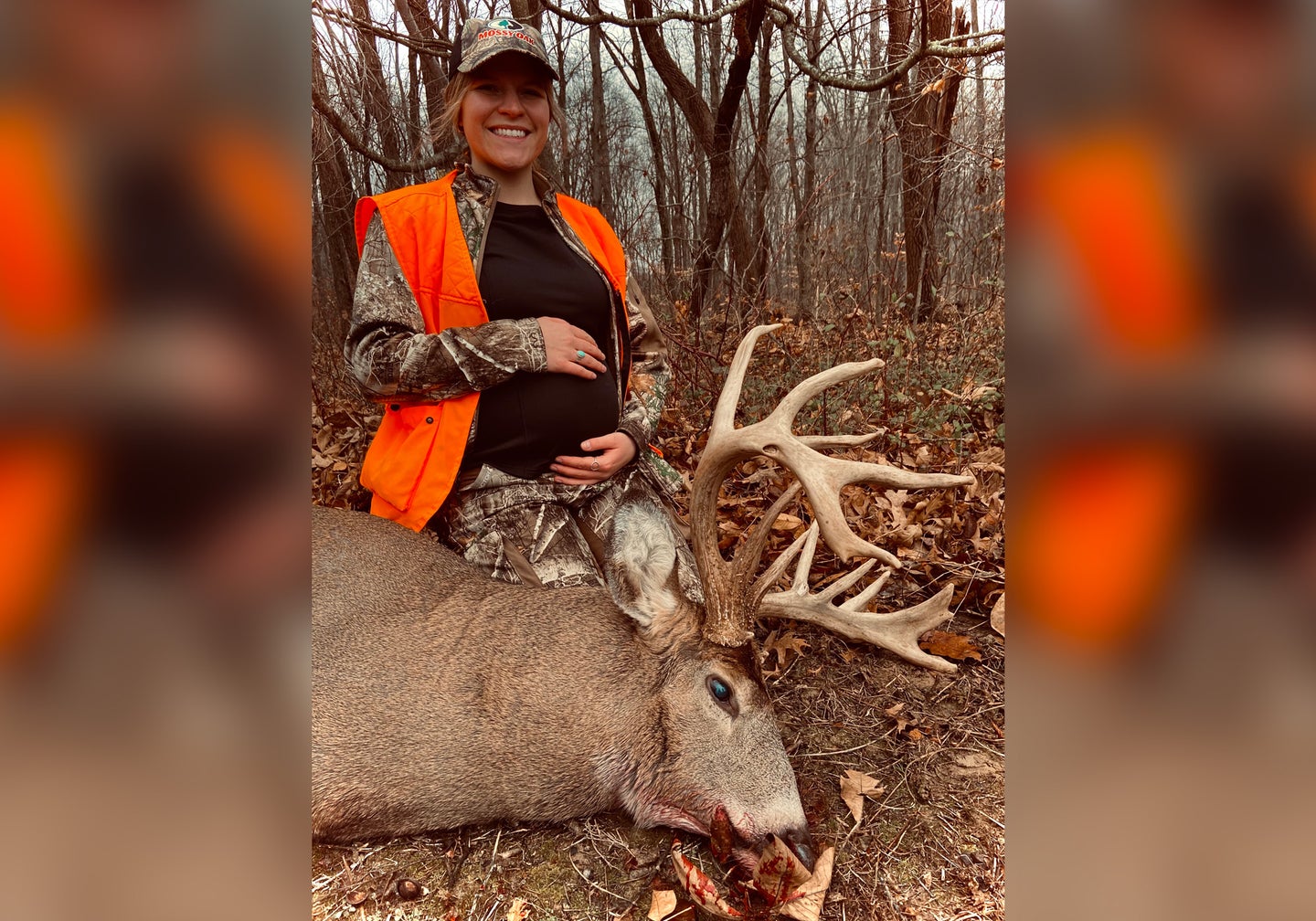 Wiford, 22, refused to let the lingering effects of her accident or her pregnancy keep her from chasing a dream buck. Cynthia Wiford
SHARE

Cynthia Wiford struggles to get in a treestand these days. She does it anyway, because deer hunting is her one true love (behind her family, of course). But when the 22-year-old Ohio hunter starts climbing the ladder, her stomach spins and she cries a little bit. Still, she pushes on.

Two years ago, Wiford fell from the top of her ladder stand. She tumbled 16 feet through the air and landed on her back, fracturing a vertebrae. One emergency surgery, two rods, and four screws later, Wiford now lives with her L1 fused to her T12. She still lacks sensation in parts of her body, but doctors are hopeful her nervous system will make a full recovery. Nerves just grow slow, they assure her.

On Nov. 28, 2022, Wiford climbed into her stand—in a harness, which she wears religiously—with a different kind of hindrance. This time, she wasn’t just carrying the weight of her experience and the recurring flashbacks that came with it. She was also seven months pregnant, carrying her baby boy up to keep her company while she searched out the brute of a buck that had shown up on trail cameras on their Ohio hunting property. If she’d lost any nerves in her accident two years prior, they were coming back clad in steel.

The Day Everything Changed

Wiford’s life has revolved around hunting since she could walk.

“I would climb up in the stand before I was even really big enough. I think I shot my first deer when I was 11, and I’ve been an avid deer hunter since then,” Wiford tells Outdoor Life. “I go all season every year until I get what I’m looking for.”

The beginning of the 2020 season was no exception. Wiford was after a buck that had consistently showed up on their cameras. She hunts a property in Brown County that belongs to close family friends, the same one her dad has hunted for 25 years.

“I went out with my boyfriend one evening and was climbing into my ladder stand, and when I reached for the top step, I jolted back, lost my balance, and fell straight back,” Wiford recalls. “It was pretty traumatic. I was rushed to the hospital. I had a crushed vertebrae in my spine, and they had to do emergency spinal cord surgery and a fusion.”

Wiford’s life came to a screeching halt in the middle of October while she recovered. The pain and frustration were equally severe.

She spent two weeks in the hospital while she relearned to walk and perform daily functions. A long surgical scar lingered on her back, and the new metal reinforcements in her spine took some getting used to. Luckily, Ohio’s bow season runs well through the beginning of the year and Wiford made shockingly fast progress.

“I went back for my first post-op appointment and the doctor said it was one of the worst injuries he’d seen but that I came out of it much better than they would have ever thought,” she says.

Less than three months after her accident, in early January, Wiford shot a doe from the ground while hunting with her dad and boyfriend. Then, a year to the day after being released from rehab in a wheelchair, she arrowed a wide 11-point buck from her treestand. Life was practically normal again.

A Baby and a Brute

Fast forward to the summer of 2022, and a 14-point buck started showing up on trail cameras around the property. His forked right brow tine and stubby left side made him stand out in velvet. Wiford, meanwhile, was nearing the end of her first trimester, but she had no plans of letting that slow her down come fall.

“Everyone knew that was the deer I wanted to kill. I had my heart set on him and I hunted him super hard,” Wiford says. “I had an opportunity on him earlier in the season with a bow but I couldn’t get a clear shot off.”

Ohio’s gun season eventually rolled around as the weeks wore on. Still suffering from some nerve damage and moving into her third trimester, Wiford traded her bow for her .350 Legend and set out on Nov. 28.

“I rushed out and [climbed] up in my stand, huffing and puffing because I was seven months pregnant,” she chuckles. “At first light, I saw a deer through the brush. I kept my eyes peeled, and then all of a sudden it was him, right there. He was at about 90 yards. I tried getting my gun on him but didn’t really have a clear shot.”

The buck got spooky and put another 100 yards between himself and Wiford’s stand. Then he stopped and turned in a clearing, giving Wiford an open lane.

“I shot him and he just kind of dove right into the brush,” she says. “I couldn’t believe I ended up getting him.”

Once the buck was on the ground, Wiford noticed a wound just below his spine.

“He actually had a flesh wound from an arrow,” she recalls. “A guy had shot him a couple weeks beforehand…in his upper back. The arrow had deflected and went upward and just sliced him.

The bowhunter who missed was among the outpouring of support and trail cam photos Wiford received from neighbors and friends.

“He was really nice about it. He messaged me and was like ‘I’m super happy for you, I had my opportunity and you had yours and you sealed the deal,'” she says. “This deer was really well-known.”

The official Buckmasters score came out to 182 6/8 inches on a 14-point rack. He’d broken one tine off just before Wiford shot him, as evidenced by recent trail camera photos that showed the tine still in tact. But the break just adds character to what is already a buck to behold.

Wiford is now just five weeks from her due date. She is both excited and nervous to become a mom, laughing that she’ll certainly have stories to tell her son one day. As for her continued journey with recovery from her accident, she has a hopeful outlook—especially when it comes to climbing into treestands.

“I deal with daily struggles, and I cry a lot when I get into a stand, but each time it gets easier,” Wiford says. “I’m pretty blessed to be where I’m at.”