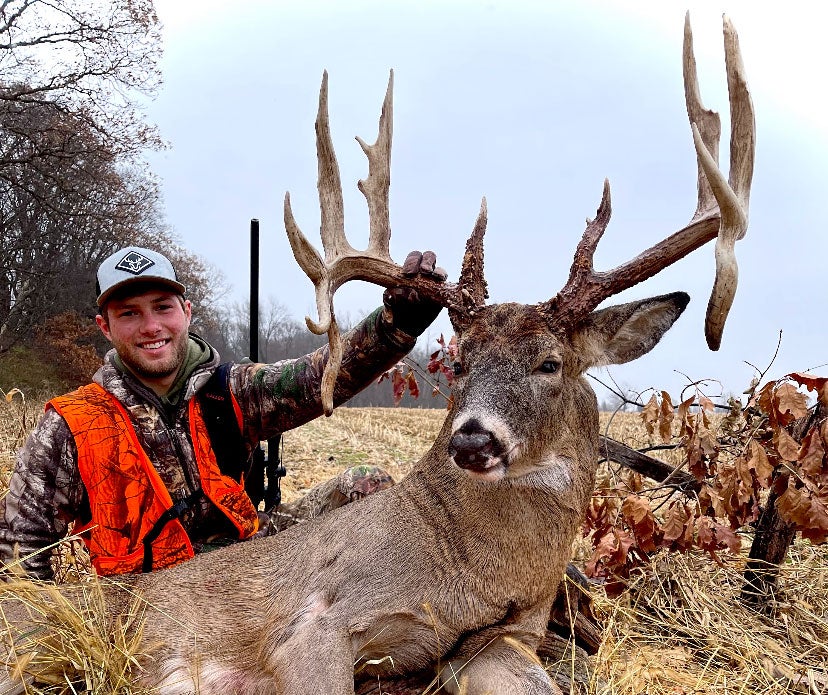 Ohio resident Hayden Billing first got trail camera pics of a drop-tine buck at the end of the season in 2020. He decided that this would be the buck he’d target in 2021. He hunted the buck hard during archery season, but never got a shot.

“I passed up several 150-class bucks just waiting for the opportunity at the drop-tine buck,” Billing recalls. “Some of my friends and family gave me a hard time for passing such good bucks.”

Billing hunts in Shelby County, where agriculture dominates the Ohio landscape. He says 40 wooded acres is considered a lot of ground. One of the farms he hunts has timber that adjoins a cut cornfield. This was where he chose to hunt the buck with a rifle.

Nov. 29 was opening day of firearms deer season in Ohio, but Billing didn’t hunt that day. He knew there were a lot of other hunters in the area after the drop-tine. Hunters from eight miles away had pics of the buck, so Billing’s plan was to stay off the farm where he suspected the buck would hunker down when the pressure started.

“I wanted any deer that were pressured from drives or anything else to congregate in the timber that bordered the big cut cornfield,” Billing says. “I wanted this tract to be a sanctuary.”

On Tuesday, Nov. 30, Billing decided to hunt from the ground. The spot he chose offered a larger view of the field and it was also a great place for recon.

At 2 p.m., Billing settled in a prone position inside the woods with his feet hanging over a creek bank. It wasn’t long before eight does and a 140-class 10-pointer entered the field 500 yards away. The big 10-pointer kept looking back into the timber, and eventually the drop-tine buck stepped out. The two bucks momentarily sparred then all the deer started moving in Billing’s direction.

“The drop-tine buck was grunting so loudly I could hear him from 300 yards away,” Billing says. “I calmed myself down and watched as he trotted to within 100 yards of me.”

He somehow remained calm and watched as the enormous buck pushed some does around. As soon as a good shot presented itself, Billing took it. As the deer bolted away, he made two quick follow up shots.

Thank you, Lord for allowing me to get this buck, Billing said aloud when the buck was down.

“Getting this buck meant a lot to me because people didn’t think I would ever get such a trophy in Shelby County.”