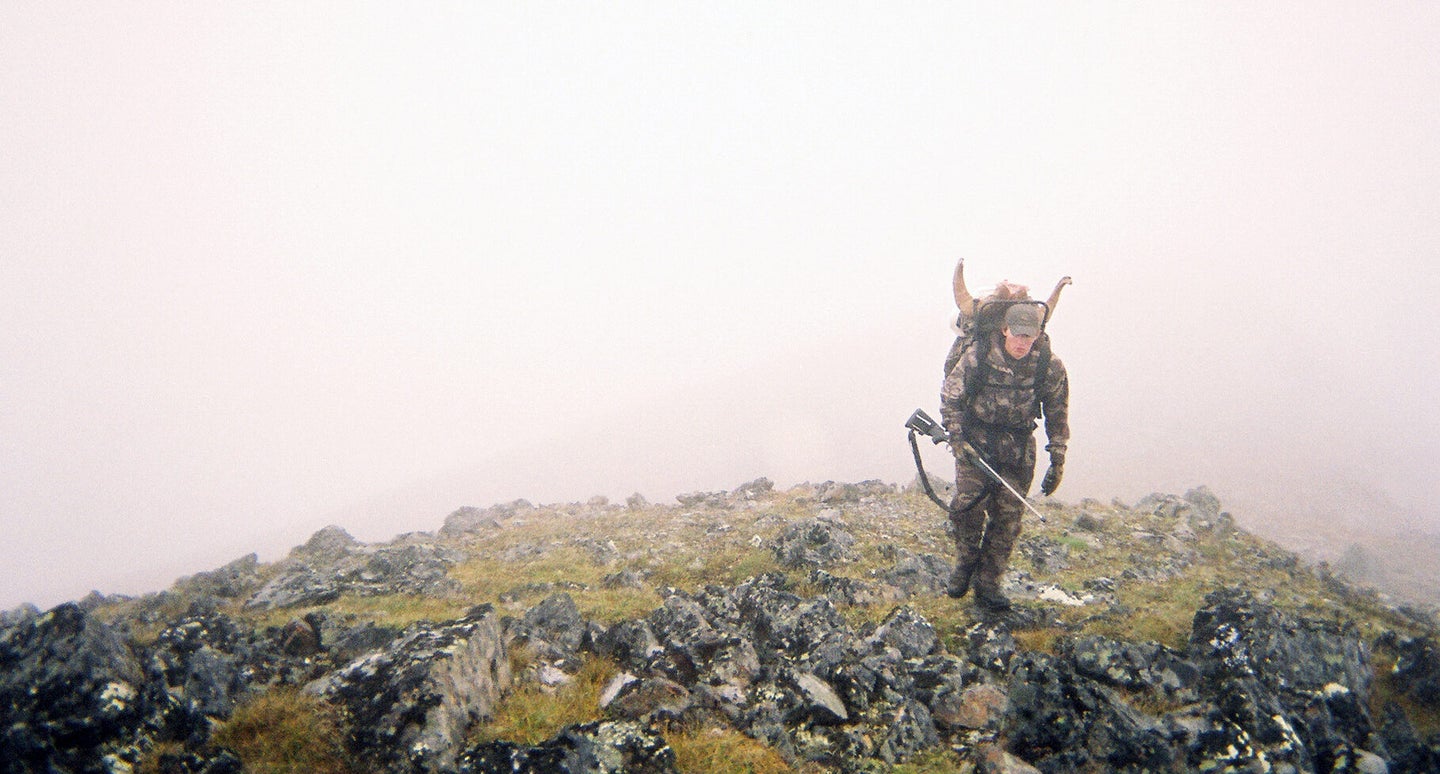 The author packs a ram off the mountain. Sheep hunters both dread and relish the inhospitable country where sheep live. Courtesy of Tyler Freel

Sheep Hunters Are a Special Kind of Crazy

It’s impossible to say why some people become obsessed with chasing mountain sheep. But when it gets under your skin, it stays

“There is no half way. After his first exposure, a man is either a sheep hunter or he isn’t.” —Jack O’Connor

I SET OUT on my first sheep hunt the August after I graduated from high school. My cousin and I had a few pieces of hand-me-down gear and a kick in the right direction. We were enthusiastic. And we had no idea what we were getting into.

I was wet behind the ears: I’d never backpack hunted for more than a night or covered such long distances under such rugged conditions. The mountains looked impossibly big and insurmountably steep.

But with plenty of work and a dose of luck, I killed my first ram on opening day in 2004. By the time we enjoyed fresh-sliced backstrap cooked on a small frying pan, I knew for sure that sheep hunting was in my blood.

I’m not exactly sure when my infatuation with mountain sheep took hold, but it was long before that first hunt. My dad is from Alaska, and my uncles still lived there. To this day, I have vivid memories of staring at the Dall ram my uncle had killed. The full-body mount was stored away in the bunkhouse at my grandma’s rural Colorado home. That sheep is what Alaska looked like to me, even from a young age. I had no idea that, decades later, I’d eventually kill a ram in the same canyon that old ram came from.

I also still have the tattered first edition of Sheep Hunting in Alaska by Tony Russ that I carefully studied as a teenager in Colorado. I’d wanted to come to Alaska since the third grade, and I knew I wanted to hunt sheep. When I was 16, my dad told us that we were moving to Alaska—and I couldn’t have been more excited. It was where sheep hunters like me were supposed to be.

For years to come after my first hunt, the thought of those steep mountains and what I’d had to endure to get a ram scared me a little. I would return anyway. Sheep hunting isn’t always what most sane people consider fun. It’s brutal, exhausting, frustrating, and boring, and it sometimes feels hopelessly impossible.

To be obsessed with hunting is relatively common. Especially here in Alaska, where opportunities abound. There’s nothing like sitting in a tree in the boreal forest waiting for a bear to visit your bait. Listening to the thrushes sing as the woods quiet in the midnight twilight is a sublime experience.

Watching a moose’s tines emerge from thick stands of young birch saplings while he grunts back to your challenge is something that never gets old. The feeling you get from a glimpse of a hundred sets of caribou antlers headed over a knoll—and right toward you—is a phenomenon that can’t be articulated.

But none of these experiences compares to seeing your first mature Dall ram, with his heavy, ringed horns curling against the sky. Mountain sheep possess a majesty that no other animal shares. Perched atop their high beds, sheep survey an indescribably rugged and harsh—but beautiful—landscape every day. The payoff for hunting them there pales in comparison to the price for us sheep hunters. Many who dip their toes enough to taste the discomfort swear it off forever. But if you hold steady through it, and through the expansive vistas of untouched mountains and the power of the wind and weather, to get a glimpse of those tawny-white sheep as you peek over a ridge, it just might stir your soul.

I’m not sure what produces such a powerful draw to hunt sheep. Sheep hunters actually describe it like a sickness, or simply call it “the sheep bug.” And what but a virus could cause a physical need to return to that rugged country every year?

I’m fortunate enough to still be a resident of Alaska, where I can regularly indulge the heartache longing inside me to hunt sheep. (What psychosis would befall me should I ever leave is a question that’s better not explored.) Those infected with the sheep bug have been known to stare longingly at distant mountain ranges and spend their life savings to hunt them as if they had no choice. And perhaps they don’t. I know more than a few old sheep hunters who would trade the final, frail years of their lives for the strength to go on just one more sheep hunt.

The compulsion to hunt sheep is something that happens to you, not something you seek. Either you have it or you don’t. That urge keeps bringing you back to the mountain, even when you know that, by the end of each day, you’ll be throwing your legs forward, scarcely able to pick up your feet far enough off the ground to clear the gravel.

To most people, it’s weird to be engrossed by an experience that is so predictably uncomfortable and even painful. (And don’t get me wrong; I like being comfortable.) Eventually sheep hunting becomes such a part of your being that you forget how strange it is. Those first years as a sheep hunter, I’d have a knot of dread in my stomach as the hunt began. I didn’t know what lay ahead, but I knew it was sure to be a trying experience. Now that reality is ingrained in the experience. I can shrug off that looming feeling and simply endure.

Holding a ram’s waxy horns and admiring the whole sheep one last time before he moves on in the cycle of predator and prey is intoxicating. During the off-season, you’ll quickly forget the desperate, agonizing job of packing a ram out. But you’ll remember what it feels like to finish the job.

Just hearing the fevered passion behind a sheep hunter’s words is enough to make droves of hunters dream of the mountains. Those with a general desire to hunt sheep are quickly withered and discouraged by the hardships of doing so; the few who are infected with this bug won’t be able to escape it. They’ll hunt sheep at every opportunity, and successful or not, they’ll never be rid of the desire to go once more.

I think, without exaggeration, every day about the times I’ve had to wait out a hellacious storm or crept above an unsuspecting ram. I’ve lived through many incredible sheep-hunting experiences, but it’s the future ones that keep me up at night. I lie awake wondering what rams might be bedded over the next ridge, and hoping I never lose the drive to find out.