And the state's DNR signed off on the plan. . . 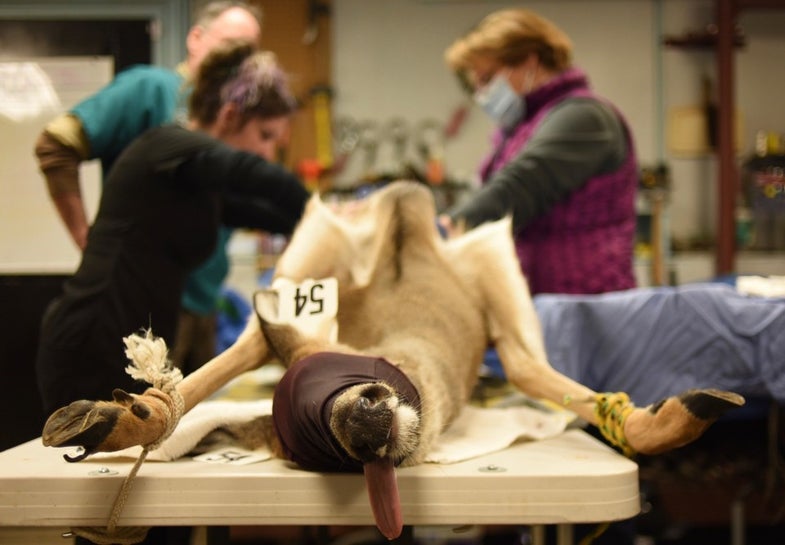 Late last week, the city of Ann Arbor darted 54 wild, free-ranging whitetails from within the city limits. The deer were then transported to a golf course maintenance shed and prepped for a surgery in which the doe’s ovaries were removed.

No, this isn’t an article from The Onion or one of those infamous “Fake News” pieces. Sadly, this actually happened. It’s not only real, it was funded by taxpayer dollars (the efforts reportedly cost more than $150,000) and the program was signed off on by the Michigan Department of Natural Resources. Yes, the agency funded by hunter and angler dollars agreed to allow the city of Ann Arbor to sterilize wild whitetails – animals owned by all residents of Michigan – as part of an experimental research program. If the program is successful, sterilization could become another tool in the department’s “management” arsenal.

For more than 100 years, the North American model of wildlife conservation has proven to be our guiding document when it comes to wildlife management. The tenets of the North American model state very clearly that wildlife is a public resource, that it is not a commercial product. Now that the state has cleared the way for the neutering of publicly owned wildlife species, does the model still apply? Are those wild, free-ranging whitetails now little more than livestock?

The story behind Ann Arbor’s wild whitetail population is not a new one. For years, residents have complained that deer have been feasting on their manicured lawns and decorative plants. Car-deer accidents have been steadily on the increase. The Ann Arborites wanted relief – so long as it didn’t involve actual wildlife management.

This was its solution: A city-funded and DNR-approved experimental session of sterilization of wildlife owned not by the city but by the residents of the state of Michigan, followed by a period of sharpshooter work to kill roughly 100 whitetails.

Deer aren’t dogs. Or cats. Or horses. They’re wild animals. You can’t simply neuter them, dump them back into their habitat and stand around patting yourselves on the butt while telling each other what kind and gentle souls you are and expect everything to be just fine. The sterilization campaign was painted as an act of empathy – city residents wanted the deer population controlled, but it didn’t want to allow hunting or hunters to do it. Instead, they opted to dart, capture and sterilize deer.

But in the process, one must wonder: At what cost? The total bill of $150,000-plus is one thing. The slippery slope created when we start treating a state-owned resource like livestock or household pets is quite another.

See, that’s what’s lost here. The folks who pushed so hard for “non-lethal” means of population control were quick to point out that they were “saving lives” by preventing hunters or sharp-shooters from killing deer, that they were doing the “humane” thing by controlling the population with birth control. In doing so, they likely aborted numerous fetuses (most of the does who underwent surgery were pregnant) and were more than willing to use wild, free-ranging wildlife as experimental test subjects. Because, surely, that’s a better option than hunting them.

But is it? Hunting is a natural, normal part of our world. Whether you choose to participate in that natural cycle of life and death is just that – a choice. Yet, that choice does not change this fact: Predator/prey relationships have existed since sharp-toothed critters realized exactly what those teeth are for.

A predator controlling prey populations is not only normal, it’s natural. Sterilization? Yeah, there’s nothing natural about that.