A Second Chance at a Giant Kansas Buck 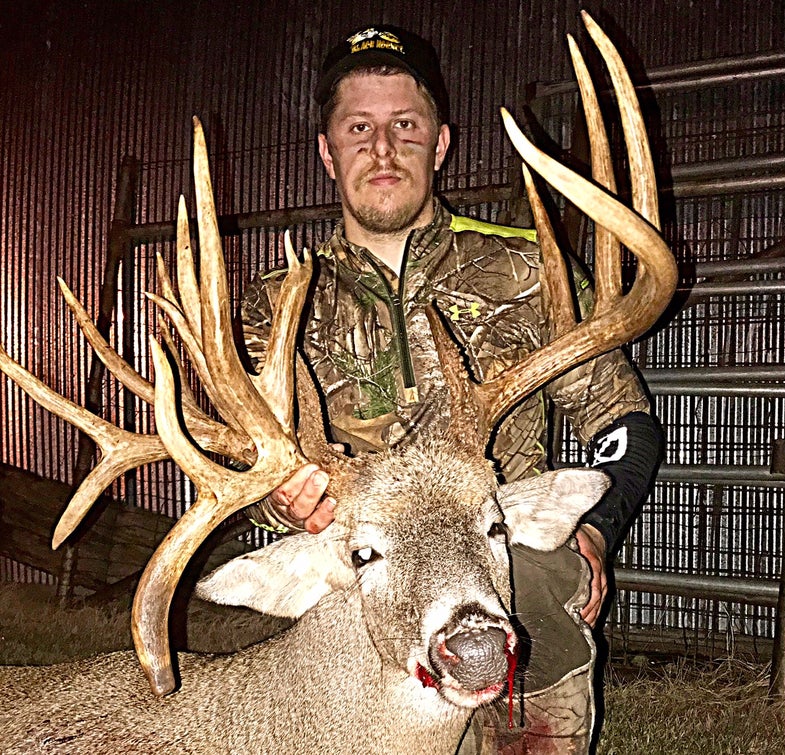 Kansas resident Evan Theiss tagged what might be one of the biggest bucks to fall this season on October 3, 2017. Here, in his own words, is how the hunt went down.

Three days before I had the chance to harvest my buck, I had the chance to take him on September 30. That was the first night I had ever laid eyes on him. As he closed the distance and stood broadside at 29 yards, I let the arrow fly. It sailed right over his back. I was devastated. In the heat of the moment, instead of setting my single pin sight to 30 yards, I had dialed it into 50 yards.

I thought I had just blown the only chance I would have at this once-in-a-lifetime buck. He didn’t seem terribly spooked after I had missed him. He just trotted off slowly, paused for a little bit, and then moved on north. I decided to stay home for a few days and give the buck a chance to settle down and trust the area again. On October 3, I decided to go hunting as conditions seemed to be good. I ended up getting to my stand on our private property extremely late though, about 5:45 in the evening. I bumped three does going in and I didn’t have very high hopes for the hunt. But shortly after I got in the tree, a group of does came in and hung around, about 30-40 yards downwind of me. A bachelor group of bucks showed up a little later. Each one was bigger than the next until a very nice 10-point walked out, probably scoring 160. He had my attention for a bit until another buck walked out behind him. I couldn’t believe it. It was the buck I missed a few nights before.

He slowly made his way in to about 21 yards and turned broadside. I pulled my bow back, settled the pin, and let the arrow fly. I knew I had hit the buck, and deer scattered everywhere. I finally picked him out of the group and watched him run about 130 yards until he ducked back into some trees. I went and grabbed my arrow and backed out. I called the game warden and land manager to get permission to track the deer, as he went onto some property south of us that is owned by the state. They gave me the go-ahead, so I waited for some buddies to come down and help me track and recover the deer. We were following the trail when one of my buddies yelled out: “There he is!”

When I walked up on him I was in total shock and awe of the size of the rack, I couldn’t be any happier in how my season turned out. I truly believe second chances do happen!