Kansas hunter Caleb Gillespie, 24, used a year’s worth of vacation days to track down this monster buck. With some... 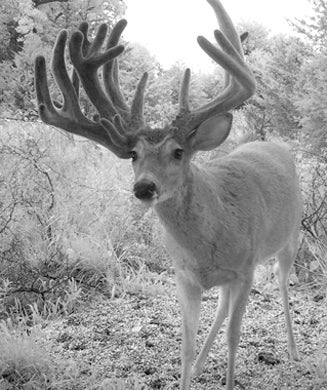 Kansas hunter Caleb Gillespie, 24, used a year’s worth of vacation days to track down this monster buck. With some unexpected help from a pair of coyotes, Gillespie’s efforts finally paid off on Sept. 28. The whitetail should shatter the current record for the largest nontypical ever harvested in in Rice County, Kan. Here’s how Gillespie’s incredible hunt played out.

Gillespie’s trail camera first captured photos of the buck in mid-July. “Right when I first saw him, you could tell he was going to be something really big,” Gillespie said.

The buck continued to appear on camera about three times a week for the rest of the summer. But when he began to shed his velvet, the buck disappeared.

With just one week left before the season opener, trail cameras started snapping photos of the big buck again. That’s when Gillespie decided take a vacation for opening week. Gillespie normally bow hunts the leased 30-acre property, but instead opted for his Hart muzzleloader to maximize his shooting range. “If I just had my bow I would’ve been sick to my stomach thinking I could’ve had him,” Gillespie said.

Gillespie saw the buck just once that first week of the season. It appeared at dark and out of range, and without a shot Gillespie had to call it a night. But that single encounter motivated Gillespie to cash in his remaining vacation days for another week of hunting.

The second week rolled by without any sign of the buck. Then, the Saturday before Gillespie had to return to work, the weather changed and so did his luck. The wind calmed, the temperature cooled, and the deer started moving early in the evening. Gillespie had a good view of grass and plum thickets from his ground blind on top of a small hill. Just after sunset, Gillespie was watching several does when a coyote emerged from the woods to his right.

The does scattered and Gillespie assumed he wouldn’t see any more deer that night. But a second coyote started barking from within the same trees. Moments later a buck trotted out of the woods, 20 yards from Gillespie’s blind. Gillespie spotted the massive antlers and instantly recognized the buck. The bruiser trotted away, halting at 60 yards. As it looked back toward the barking coyote, Gillespie squeezed the trigger.

“My mind was just blank, it happened so quick,” Gillespie said. “From the time I saw him from the time I shot not even a full minute went by. I didn’t have too much time to get all excited and nervous and everything. But after I shot, I lost it. I was pretty excited.”

The buck ran 30 yards and collapsed in a somersault. Gillepsie could see the downed buck from his blind and waited 10 minutes before following. Gillespie immediately called his father, who was hunting nearby. “It was even bigger than I’d thought from the pictures,” Gillespie said. “I was ecstatic.”

Gillespie and his dad taped the buck at 238 1/8 inches. That unofficial score should easily break the Boone and Crockett Club record for the largest nontypical whitetail out of Rice County. The buck that holds the current county record measured 200 6/8 inches and was taken in 2008. The biggest Kansas nontypical on the B&C record books scored 280 4/8 inches. That buck was taken in 1987.