Use a Stride Stick to Track Wounded Deer

Miss the vital area and a deer will bolt—but it won’t drop. Instead, it will often slow to a walking... 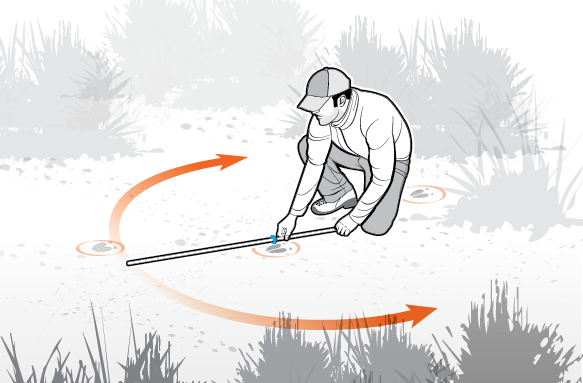 Miss the vital area and a deer will bolt—but it won’t drop. Instead, it will often slow to a walking pace, travel a distance, and then lie down to expire. And it will leave little, if any, blood trail.
Recovering that deer requires tracking skills, and one of the best tools a hunter can have is what I’ll call a “stride stick.” This is a slender, 4-foot wooden dowel with a large rubber band wrapped around it.

“The stride stick,” explains Lee, “only works on a walking deer, which is the gait that deer often assume after the initial impact from the poorly struck hit.”

Walking Aid
To use the stride stick, you must first locate a front and rear track of the deer. Place the forward tip of the stick on the base of the front track and adjust the rubber band to a position on the back of the rear track. The stick now measures the animal’s normal stride, and the rubber band becomes the “pivot point” from which you can find the next track.

Repeat the procedure, pivoting front one track to the next. The area swept by the tip of the dowel shows you the precise area in which to look for the next track. The advantage of the stride stick is that it eliminates visual clutter and focuses the hunter’s eye on the patch of ground where the next track should be found. That next track may be nothing more than a scrape on hard ground or an overturned leaf with fresh dirt on it amidst a leaf-littered forest floor. But the stick’s arc will help you spot it.

The trick to finding these obscure tracks is first locating that initial set, and then calibrating your stick. At some point, assuming you did hit the animal, you should find blood associated with the track.

Cut Your Own
Don’t worry about buying a dowel from a hardware store. Just cut and trim a straight limb or a slender sapling, measure the track, and then cut a notch in one end of the stick in lieu of using a rubber band. It’s a simple aid that can help hunters stick to the tracks and recover their trophy.