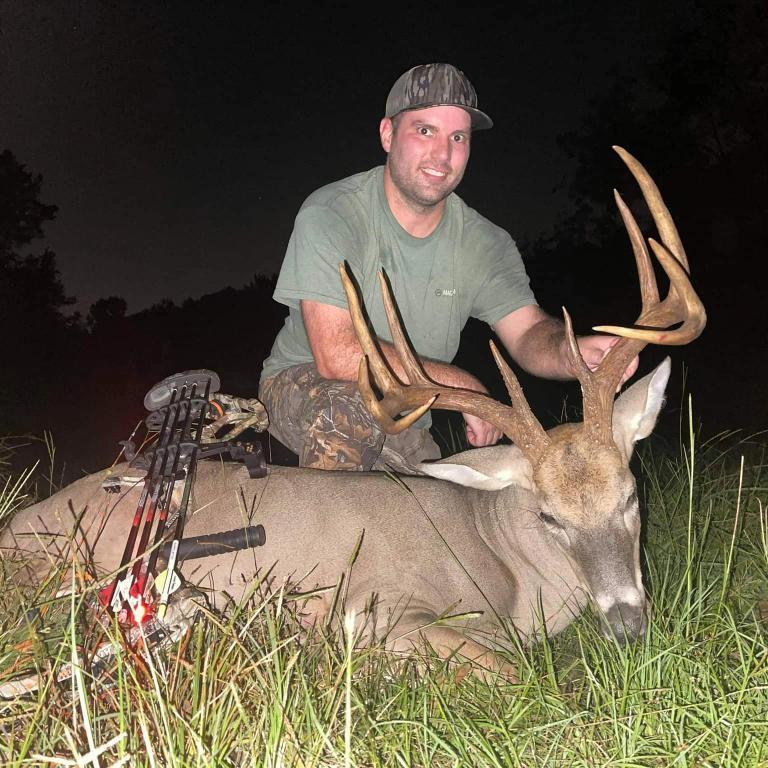 Jake Wesley with the first of two P&Y bucks he took on opening weekend of the Georgia deer season.
SHARE

Opening weekend of Georgia’s bow-only deer season (Sept. 11-12) is one Jake Wesley will never forget. The air-traffic controller from the town of Locust Grove (south of Atlanta) shot a pair of 10-point bucks that will make the prestigious Pope & Young record book for archery whitetails.

Wesley was hunting DeKalb County, a suburb of Atlanta and a bowhunting-only area known for massive whitetails.

On the afternoon of Sept. 11, Wesley was in a stand on private land that he only had a week to scout before the season opener.

“My friend used to hunt that property, but he’s not able to hunt it this year,” Wesley told Georgia Outdoor News. “He introduced me to the landowner, who gave me permission to hunt it. I went out about a week before the season, made a mock scrape and hung a camera. The big buck came out that evening hitting the mock scrape. He came out four or five times a night all the way to the opener. Every evening he was out there between 6:40 p.m. and 8 p.m.”

Wesley didn’t have long to wait the afternoon of Sept. 11 for the buck to show. The headed towards the scrape, and once it walked within 30 yards of his stand, he sent an arrow into the buck’s chest.

The almost 200-pound buck is a near-perfect typical 10-point, with over 11-inch G3 tines. It will green score about 150 inches, likely losing a little antler mass before official P&Y scoring can be made after the required 60-day drying period.

The next afternoon, Wesley hunted a different DeKalb County private-land spot four miles from where he shot the first 10-pointer. He had hunted the rolling hardwood area for four years and knew it well, passing a good buck there the previous season. During summer, he set a trail camera in the area where he had seen the buck in 2020, and learned the buck had grown larger and was using the same trails and travel patterns it had the previous year.

“Every day, he [the buck] came in at the same time in the evening,” says Wesley. “The buck was coming from exactly where he came in 2020, so I had a pretty good idea about his travels.”

That evening a doe came to a mineral block Wesley had near his stand and that deer drew the attention of the buck Wesley was after. The buck came down a ridge headed for the doe, then stopped at 45 yards and instinctively knew something about the setup was amiss.

Wesley decided now was the time to take the buck, drew, and sent his arrow to the deer’s chest. It was a perfect hit, and the deer fell just 80 yards from his treestand.

Wesley’s second buck was another perfect typical 10-point, with slightly smaller antler mass and tine length. But it still green scores about 140 inches, and should make the P&Y record book.