Taylor Nield arrowed the mule deer of a lifetime in the Gem State. But what really mattered was having his family there with him 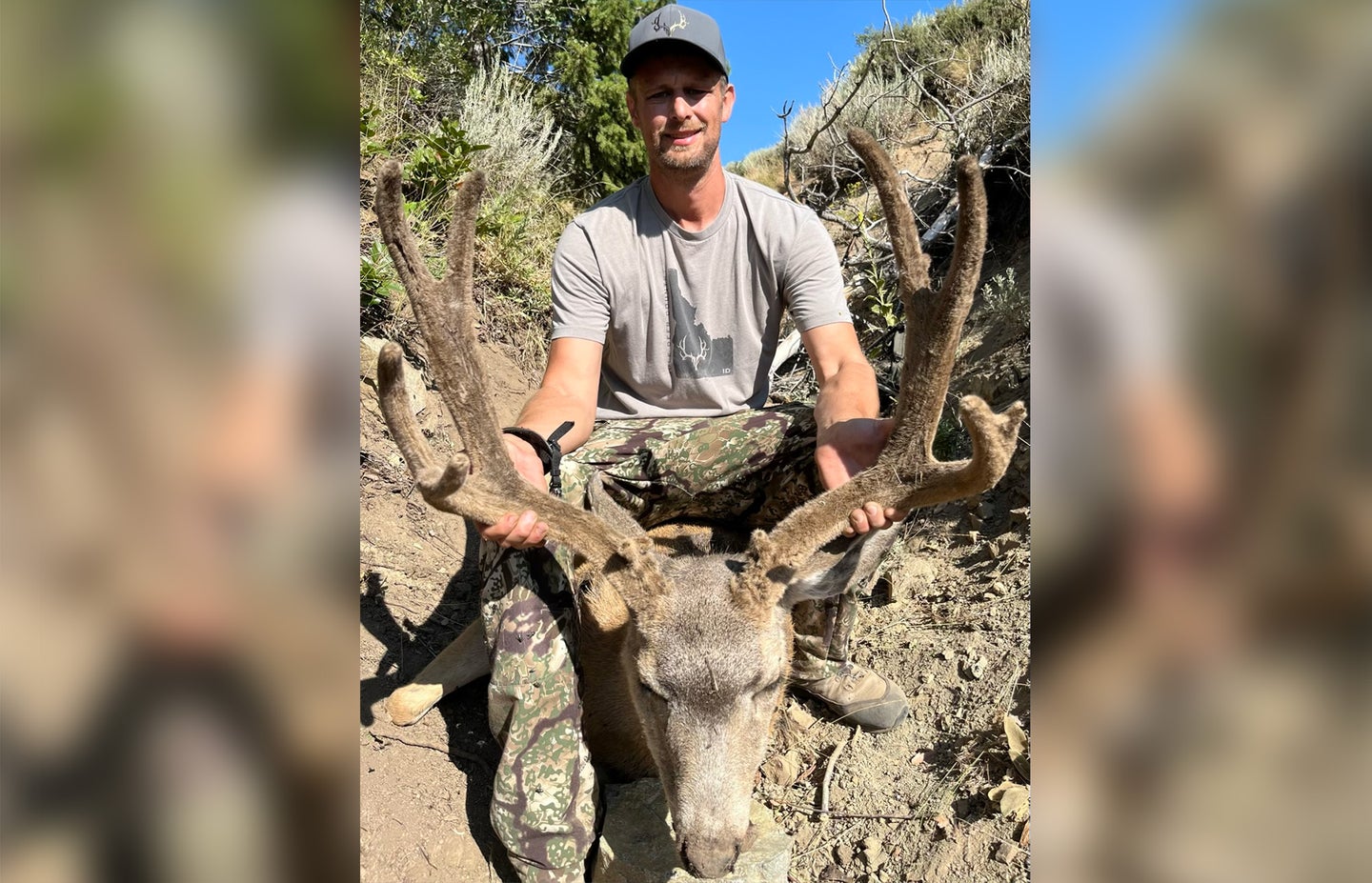 The road to success was a long one this year for bowhunter Taylor Nield of Nampa, Idaho. He spent most summer weekends driving around and scouting in his home state, searching for a mule deer worth chasing come archery season. He eventually found the buck he was looking for: an old, nontypical brute with a chunk missing from one ear and massive main beams. On Aug. 26, he arrowed the buck from 20 yards and brought him home.

But that success isn’t the only thing Nield will remember about this year’s mule deer hunt. He also won’t hold onto the shot he missed on the same buck on the second day of the season, or the feelings of defeat that followed him around in the aftermath. From the summer scouting trips to the day he finally dropped the buck, Nield hardly spent any time alone. This year’s hunt was a family matter. For his nephews Parx, 13, and Bridger, 11, it was a learning opportunity. And for his father Sid, it was the adventure of a lifetime.

“I initially drew this tag and was going to call a couple of my buddies because we’re avid backpack hunters. That’s kind of what we do. So it was more about going deep and killing a really big buck,” Nield tells Outdoor Life. “And then about a week went by and I had to ask myself how I wanted to approach this hunt and what mattered. It turned out I wanted to do this hunt with my dad and a couple of my nephews instead. My nephews are just starting bowhunting and I thought this would be the perfect experience.”

Once he made that decision, Nield focused his scouting on areas that would be friendly for his nephews, father, and brother-in-law Tyler, who would also accompany the group. A target buck popped up on the third scouting trip on a chunk of land that seemed perfect for everyone’s comfort level. Nield returned to the same spot frequently for the rest of the summer and “watched the buck like a hawk.”

A few days before the season rolled around, Nield, Parx, Bridger, Tyler, and Sid headed out to the spot to do some final scouting and they saw the buck two more times. But then, on opening day, he disappeared.

“It was super strange because I put in a lot of time and I had seen him almost every day for a month, but on opening day he was gone,” Nield says. “So I was a little bummed out about that.”

The next morning was pretty dead, but in the afternoon Nield stumbled across the buck bedded down by himself under a rocky cliff.

“What was cool about this spot was that I could get my dad and nephews set up on the opposite side of the canyon on the draw and they could watch the whole stalk from about 350 yards away. So they could actually watch me make my move all the way around this canyon,” Nield says.

He crept around the rim of the canyon, which included skirting around 80 yards of rocky cliff, before reaching his 20-yard position on the buck. But things didn’t quite go as planned.

“I actually missed. I just grazed the buck and missed…on the second day of my hunt, which was absolutely devastating,” Nield says. “I religiously practiced more than I ever have in my life and was never worried about missing. And I had the perfect situation with everybody watching. And so it was a pretty tough one to swallow for me.”

They saw the buck again the next day, but Nield couldn’t get close enough to make a decent shot. The family went home for the week with nothing, save for Nield’s bruised ego.

“I had clipped this buck and I knew I needed to get back ASAP and try to find him. My dad happened to call me right before I was leaving the next weekend and told me he wanted to be there for my hunt. He was going to work it into his schedule and make sure he could leave with me,” Nield says. “So this motivated me and gave me a whole new life. We went back up together, just him and I.”

Much to their frustration, Nield and Sid didn’t see anything for much of their first day back in the woods. As the afternoon wore on, Sid recommended Nield go glass into the bottom of a nearby canyon. Nield’s binoculars landed on antlers poking up.

“I saw a tip of a horn under a tree, not knowing it was the buck I’d been hunting,” Nield says. “But I decided there was nothing I could really do other than just make a stalk on this buck and get close enough to where I could figure out what buck it was and go from there.”

Nield spent an hour sneaking up on the unidentified buck while his dad watched everything unfold from above. Eventually Nield got close enough to realize it was the same wily target buck from opening week, bedded under a tree. He let a perfect 20-yard shot fly and killed the buck instantly. Instead of approaching the deer, he turned around and backtracked 340 yards to grab his dad first so they could approach the deer together. They rough-scored him around 190 inches and measured 46 inches of mass.

“[His reaction] was just tears of joy. He knew how bad and how devastating it was to miss. I haven’t missed a lot in my life, so it was a tough situation. And he said he was probably more nervous watching me do this than I was because he wanted me to get this buck so bad, probably even more than I did,” Nield says. “That’s kind of the relationship I have with my dad.”

And even though his nephews weren’t with him, Nield says he’s glad they witnessed him miss his first shot because it created a better learning opportunity for the young hunters.

“They got to see the highest of highs and the lowest of lows. Now that it’s come full circle, there’s a lot of stuff they could pull from this [experience]. You can’t hang your head, you have to keep going. Especially since I did touch the buck on my first shot. I wasn’t gonna shoot anything other than that buck because that was my mistake,” Nield says. “I wouldn’t have it any other way now that we found him and got him.”