Lee Ellis had given up on the nontypical whitetail after not seeing him for five weeks. Then the buck appeared out of nowhere 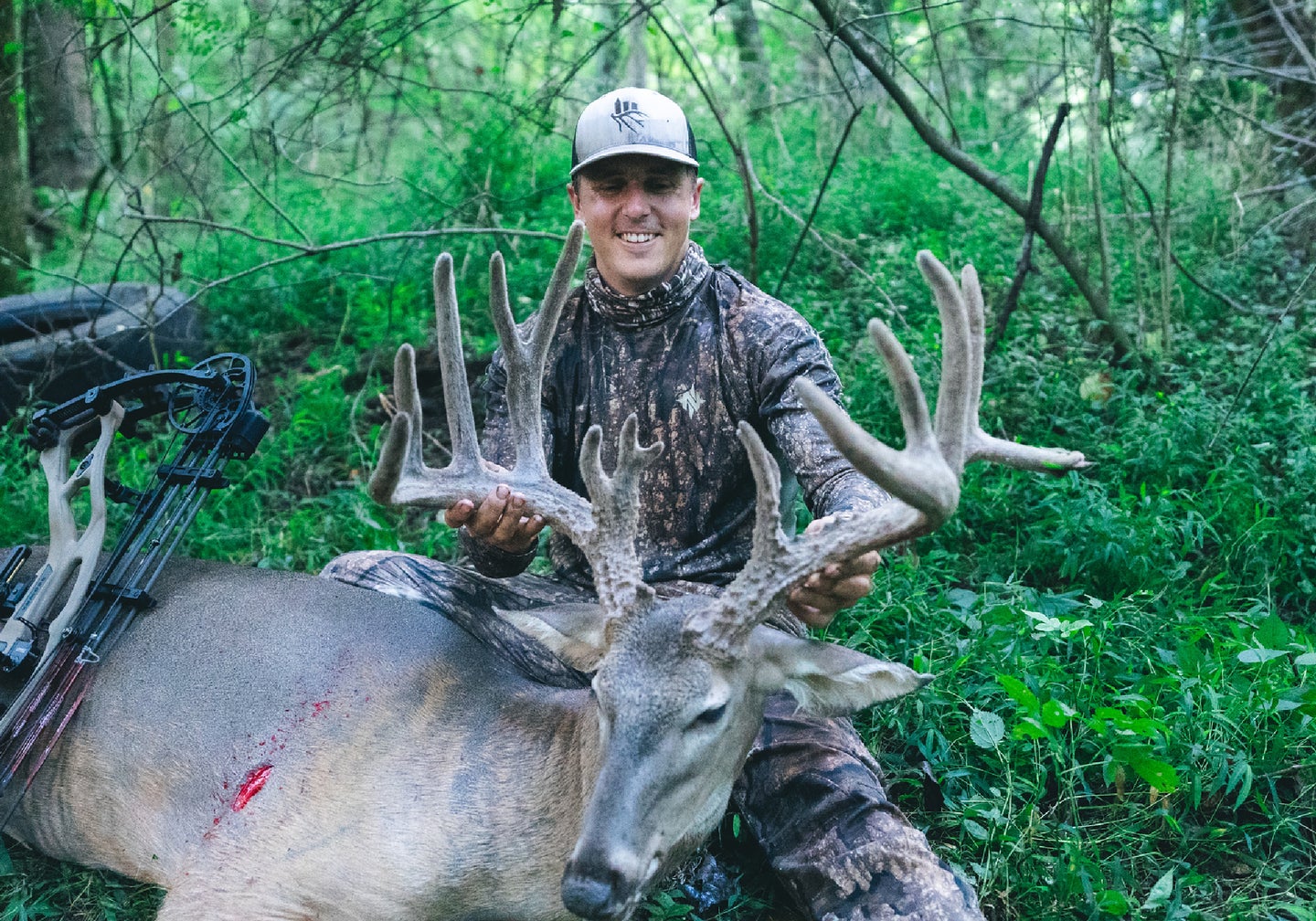 Archery hunts rarely go as planned. When they do stray from whatever vision the hunter had, usually it’s in the direction of disappointment. The pieces hardly ever fall into place better than originally imagined, even though such days are what hunters dream about year after year.

However, when Atlanta-based suburban bowhunter Lee Ellis watched a massive velvet buck slip into bow range, he knew his hunt was playing out better than he could have ever dreamed. He made the most of the opportunity, executing a perfect shot on the deer at 17 yards.

Ellis, a founding member of suburban bowhunting brand Seek One, notched his Tennessee whitetail tag on opening day with a 190 2/8-inch nontypical velvet buck he’d been watching since last season. On the surface it sounds like a perfectly planned and executed hunt, but that wasn’t the buck Ellis was targeting that day. In fact, that was the first time Ellis had seen the big nontypical—and his telltale wayward tine branching off the left G2—in over a month. Just a few days before the opener, he shifted his focus to a different 8-pointer that was showing up more often on trail camera while the big nontypical was AWOL.

“I had pictures of the [nontypical] last year, and I think he was 3 1/2 years old and, at best, 140,” Ellis tells Outdoor Life. “I saw him on and off, nothing consistent, but I got pictures of him at the end of the year and knew he had made it.”

“Spring rolls around and I’m getting pictures of this deer back in the area that I knew he summered at. He got really big and was definitely the buck I was really gunning for. But as we got closer to the season, he got super inconsistent.”

Then, on the Thursday before the opener, the 8-pointer Ellis had seen for three years showed up on camera right near his stand.

“My focus totally shifted,” Ellis says. “I told myself I’ve got history with him, he’s a really good deer, he just showed up. I’m going to ride it out at this spot and pursue this 8-pointer, and hopefully over three days of sitting I’d get a crack at him.”

Ellis spent opening morning sitting a stand in a suburban area (he’s understandably very secretive about hunting locations). During the sit, he got photos from a cell cam of “Big 8” milling around just a short walk up the creek from him. By late morning the temperature soared and Ellis ducked inside to avoid stinking up the woods. He reemerged at 2 o’clock to another photo of “Big 8” working over the same area.

“I’m freaking out thinking he’s going to work his way down,” Ellis says. “Up the creek is right in the core of his bedding area, where I have this camera. I don’t have permission to hunt there, I only have permission to run a camera. All my attention is focused to my right, I’m thinking if I see a deer coming, hopefully it would be him.”

Time marched on and other smaller bucks poured down from that direction, but “Big 8” was nowhere to be seen.

“It’s starting to get down to the last hour and I catch movement of a small buck on my left, and then I see a big rack,” Ellis says. “I thought it was Big 8, but then I saw the flyer off the G2.”

For the first time in five weeks, the monster nontypical popped up right before Ellis’ eyes.

“He was just cruising through. I think around this time, deer will break out of their summer area and do a loop exploring their rut range, and I guess he was just doing that.”

Still in disbelief, Ellis lined up the 17-yard shot and let the arrow fly. The buck didn’t make it 20 yards.

“It was something I was not expecting at all. It’s literally just a gift from God,” Ellis says. “It was probably one of the absolute highs of my hunting career, just the ultimate surprise and shock of the one day in five weeks that the deer wants to make a loop, and I happened to be in the woods in the stand when he did it.”

Ellis and his friends measured the rack with its 16 points and thinning velvet. Then they measured it again. What he originally thought would be a 170- to 180-inch score turned out to be just a hair above 190. Despite the countless hours of scouting and driving long distances just to change camera batteries, Ellis says he feels undeserving of the experience.

“I can’t tell you that I’m a good enough hunter where my instinct is like ‘He’s going to show up at the other place, I’m going to hunt there.’ It was total dumb luck,” he says. “But those moments are what we live for as bowhunters, those magic moments where all the stars align and everything comes together.”