The Perfect Setup for a 150-Inch Iowa Buck

Successful hunters know that it takes more than just a single hunting season to really learn the ins and outs... 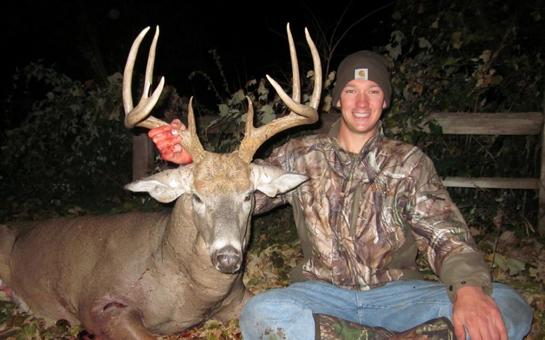 Successful hunters know that it takes more than just a single hunting season to really learn the ins and outs of a property. Scouting year-round helps hunters pattern the deer and learn how they use the lay of the land under certain conditions to ensure they’re in the right spot come hunting season.

Bowhunter Dillon Drew knows this all too well. Drew hunts a small piece of family land and understands how the deer move through the area based on several years of experience on this farm. With two main stands to hunt, depending on wind, Drew uses the weather to dictate where he will hunt. Throughout the summer he set out trail cameras to monitor the area, but no shooters were showing up. This, however, didn’t concern Drew as every fall a big buck would move into the area and this year would prove to be no different.

On October 7, Drew was in his favorite treestand, 20 feet up in an oak tree. The stand sits along the south edge of a CRP field that the deer frequently cross on their way to a creek bottom. On this day the weather was in his favor with temperatures in the low 50s and a steady breeze.

At 6:05 p.m. Drew heard footsteps coming his way. The way the stand is situated, he wasn’t able to see the deer coming until they entered the first shooting lane. As an experienced hunter, Drew knew it was time to stand up, grab his bow and get ready. When the deer stepped into the clearing, Drew was taken back by the size of the buck’s rack – there was no doubt that this was a shooter.

One glance at the buck’s antlers was all it took for Drew to draw back his bow and let out a bleat to stop the deer dead in his tracks. Looking up, the buck had its front leg slightly pulled back, covering its vitals. To compensate, Drew aimed a little higher to slip an arrow behind the shoulder, but the shot was not ideal. The buck took a few steps forward before stopping in a second shooting window. Without hesitation, Drew nocked a second arrow and drew back as the buck stood at a slight quartering away angle. The second shot hit its mark and the buck took off. After a 40-yard run, the buck crashed.

Drew slipped out of the woods in the opposite direction and headed to his grandparents house nearby for some help with the tracking job. Two hours had passed by the time he returned with his grandfather to recover the deer. Back at the site of the second hit, Drew found his arrow with bubbly blood on it – a welcome sign. It was a relatively short 60-yard tracking job to a big whitetail.

With a goal of taking a 150-class buck, Drew was pleasantly surprised to find that this mainframe 8-pointer would buck hit the mark. Despite the summer scouting and several trail camera pictures, Drew never got this buck on camera and wasn’t familiar with the animal. But he used his local knowledge of the area and past experiences to hunt when the conditions were right, knowing that eventually a big buck would make his way through the area.