I grew up hunting the big timber of Michigan’s Upper Peninsula. If you’ve never visited the U.P, it’s a fairly... 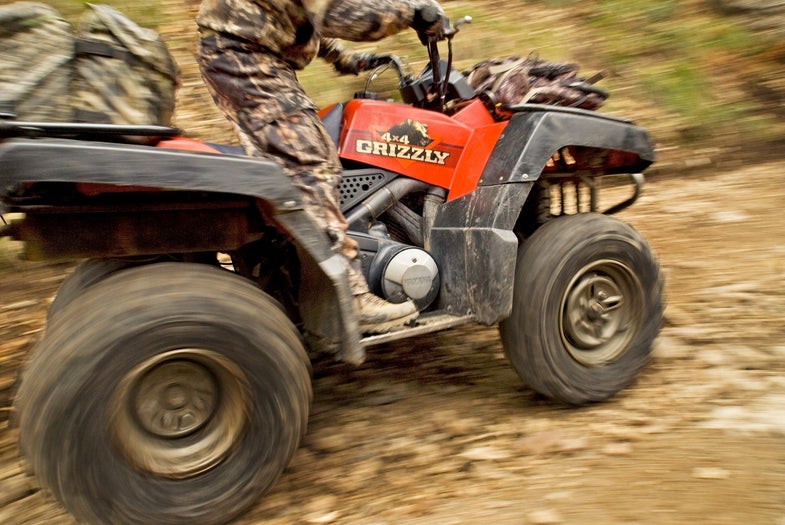 I grew up hunting the big timber of Michigan’s Upper Peninsula. If you’ve never visited the U.P, it’s a fairly easy place to describe. You cross the mighty Mackinac Bridge, a 7-mile passage over a pair of Great Lakes (Michigan on the left, Huron on the right).

There is some farmland in certain areas. But not much.

I would travel each November to our family deer camp on the U.P.’s western end where we would hunt National Forest ground. And we would complain about the “lazy hunters” who would drive ATVs down logging roads to access their hunting locations.

It made little sense to me why anyone would introduce a noisy, smelly machine into terrain where deer seldom hear such commotion. While it bothered my dad and grandpa to no end, I sort of liked it when I’d hear an ATV in the distance, because I figured any deer in that area would soon be heading my way.

Here’s some irony: I now use an ATV on a regular basis on the 17 acres I own as well as on any other ground I have permission to hunt (and use the machine of course).

Why the change of heart?

I no longer hunt the big timber of the U.P. The vast majority of the areas I hunt are located in typical Midwestern farmland habitat. Human activity, even in “remote” areas is not uncommon as farmers work the ground. Unlike the U.P. deer which seldom see any humans, the deer I’m hunting see them often – and seem to know the difference between someone planting corn and someone looking to plant a tag on them.

I’m hunting small pieces of ground with plenty of hunting pressure. My goal is to hunt areas where deer congregate once the hunting pressure ramps up. Which means I have to check trail cameras, hang stands and occasionally haul a deer out of the woods after a successful outing – all without letting the deer know I’m there.

So, I do the opposite. I don’t even try to hide the fact that I’m there. And that little trick has worked exceptionally well. When I check cameras, which I now do almost year-round, I do it with an ATV. I pull right up to the camera location, swap out the card and move on. I arrange cameras (most of them anyway) so that I never have to put a boot on the ground.

After a few weeks of this, the deer seem to pay the ATV noise little mind. I’ve driven right past bedded deer on several occasions and I’ve captured trail camera images of mature bucks just minutes after leaving.

When hanging stands, I use the ATV to transport them in and I leave the machine running while I do the work.

When I shoot a deer, the ATV is employed to get it out of the field.
Does this make me lazy? I’m sure there are those who will say that it does. I can live with that.

It’s much better than the alternative of educating the deer that I’m hunting.
I don’t use the ATV to access a stand when I’m actually hunting. I sneak in as quietly as possible. My goal when hunting is to ambush. Once deer become accustomed to the noise of the ATV, it doesn’t send them running. But it does let them know that someone is around. I don’t want that when I’m hunting.

Deer react much more negatively when I bump into them while walking. Thus I try to avoid that at all costs. By using the ATV for checking cameras and other related activities, I’m greatly minimizing the number of “walks” I’m taking in the woods and using the ATV to create a false sense of security for the whitetails.

Why are we discussing this tactic now, with deer season months away?

Simple. This isn’t an overnight tactic that you can start in September. I’m not saying you need to start a daily ATV route right now. But if you’re checking cameras, hunting sheds or maintaining stand locations – and you have permission to use an ATV – now is a great time to start conditioning the deer in the area to it.

This isn’t a big-timber tactic where deer seldom hear machinery. But in those places where tractors and trucks are common occurrences in the habitat the deer you’re hunting live, it’s a great way to save yourself a few steps and to do the work you need to do while minimizing hunting-related pressure.