A month to the day after his great uncle's passing, Jadyn Martin tagged a buck to remember him by 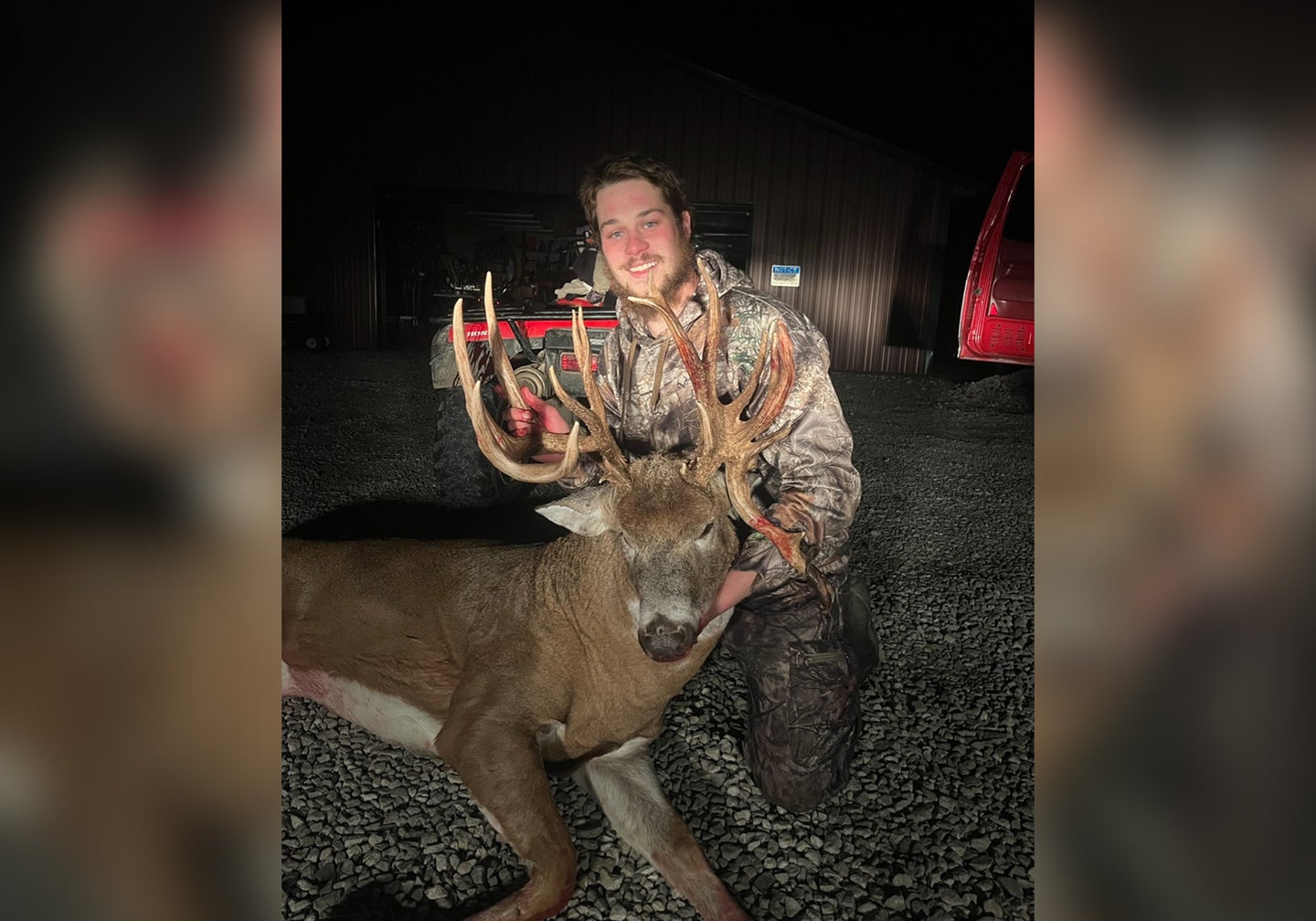 Jadyn Martin harvested this deer a month to the day after his great uncle passed away. Jadyn Martin
SHARE

For every big, gnarly whitetail in the record books, there’s at least one hunter with a deep history of photos, sheds, and anecdotes from the buck. It only seems natural that the hunter with the most history becomes the hunter with the buck. But for 21-year-old Ohio bowhunter Jadyn Martin, who tagged a 25-point nontypical giant last month, that wasn’t necessarily the case.

In fact, Martin didn’t even know the buck existed until about two weeks before he shot it. But sometimes luck—and perhaps a little divine intervention—determines the outcome of a hunt more than preparation and experience do.

The Sandusky, Ohio resident went into the 2022 season with his sights set on a particular buck. Martin had been scouting his Great Uncle Rick’s property and his cell cameras were lighting up with a 14-point nontypical whitetail meandering around. But shortly after the season opened, on Oct. 8, Rick passed away while recovering from a stroke and a car accident that had occurred months prior. Suddenly, the 2022 season went from exciting to austere. It would likely be the last time Martin would hunt the property before the family sold it.

“In my heart and my head I told myself I had to shoot something to remember him by,” Martin tells Outdoor Life. “So I set a goal to focus on shooting one of the bigger, mature bucks I had seen.”

That meant chasing the 14-point buck…until a 25-pointer showed up on Martin’s cameras on Oct. 16.

“It blew my mind,” Martin recalls. “This other guy that hunted around the area was telling me about this 200-inch deer and how he’s been hunting it for a few years. But I didn’t believe him because I’d never seen the deer myself, and I hunt pretty close to this guy. But when I started getting pictures, I just knew I needed to be patient.”

As the season progressed, Martin withheld shots on multiple 8-pointers. Then the 14-pointer showed up during the first week of November chasing a doe around. Martin couldn’t get a decent shot at it, much to his disappointment. But pictures of the 25-pointer kept coming in, reminding Martin of what was still lounging around the woods.

“About 40 minutes go by and I see this small 8-pointer come out of the bedding area. I took a video of him, then sat there and waited. I had a feeling it was going to be a good night,” Martin says. “There were about 35 more minutes of shooting light left and I was starting to get anxious. But I happen to look up above this field and see these two does running across the field. Right then and there, I thought ‘hmm, there’s a big buck chasing them.'”

Martin climbed out of the stand and made his way over to a different one, about 80 yards away. His vantage point in the new stand allowed a clear view of two more does running around the same field. He then got down from the stand and walked up the hill. As he headed toward the does, he suddenly saw the 25-point buck staring at him from a distance.

“I keep walking at the deer, because there’s only 15 minutes until shooting light is over. My wind’s blowing right in his face,” Martin says. “Something told me to just crouch down and get low as I can. He can’t really see what I am, he just knows I’m something in the field 100 yards away.”

The buck redirected his attention to the does and followed them around for a bit. But it promptly landed its gaze on Martin again. This time, it started walking right at him.

“I’m sitting there looking through the scope on my crossbow and he just keeps getting bigger and bigger and bigger,” he says. “He got about 30 yards from me, turned a little bit, and that’s when I shot him. He ran about 30 yards. I went to my truck, sat there, and waited for probably about an hour and a half. I bawled my eyes out.”

Eventually Martin’s friend came to help him recover the buck. Martin also called his girlfriend Kamryn, who harvested her first deer just a few weeks prior. The buck had a thick drop tine on its left side, multiple brow tines, and a tall 5-point main frame on the right side. Local legend says the buck was hit by a snowplow at one point, causing the skewed growth. Trail camera photos from this year also revealed that the buck broke off a large chunk of antler on the left side before the season started. It certainly had stories to tell.

The 25 scoreable points plus the spread added up to 229 5/8 inches, according to Buckmasters master scorer Toby Hughes. Martin estimates the buck is at least seven years old, based on the stories he’s heard from nearby hunters familiar with it.

“I just feel like everything played out for me.”