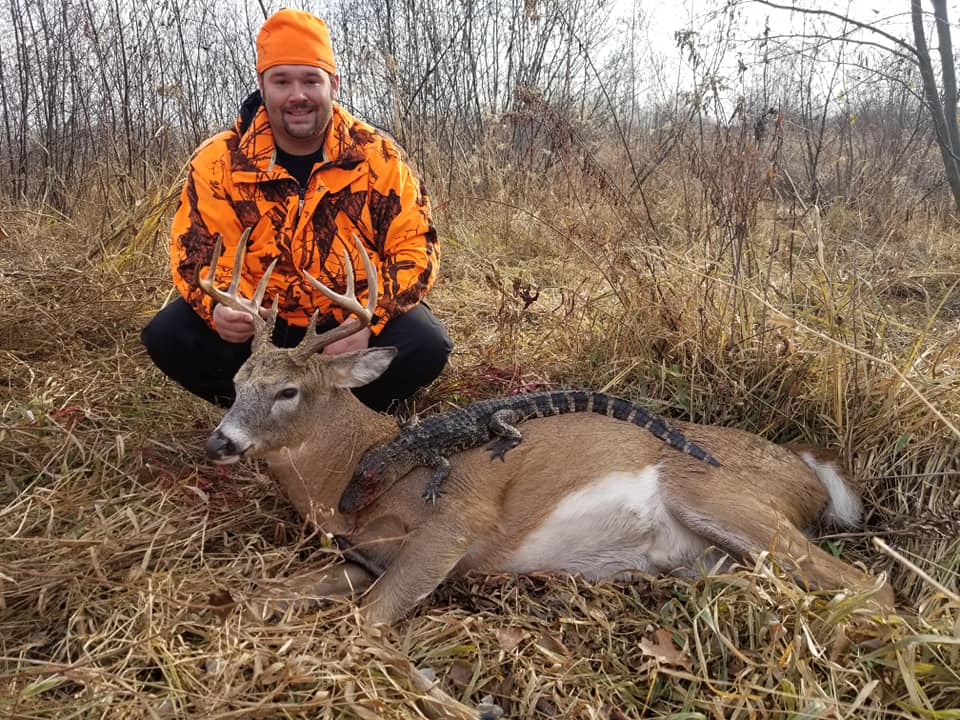 Cory Klocek certainly got more bang for his buck on Minnesota’s deer opener than he bargained for. The hunter killed a 10-pointer…and an alligator.

On Nov. 7, Klocek sat in a blind next to a small pond at a friend’s farm, filled with the anticipation that accompanies every opening day of deer season. He had prepared for weeks, scouting prime deer habitat and travel routes.

“Sure enough, one of my 10-pointers that I had on my list stepped out 25 yards right in front of me,” says Klocek.

Klocek typically hunts with a rifle, but took this buck with a shotgun due to the regulations where he was hunting. While tracking the fallen buck around the pond, he spotted an alligator less than 10 yards away in the sawgrass. As a hunter growing up in Minnesota, he had seen a fair share of lizards, snakes, and salamanders—but never a gator.

“I stood there for five minutes or so and looked at it before I did anything. I was just confused. I thought maybe it was a rubber one that somebody put there as a trick,” says Klocek. “But then I recalled I heard thrashing in the water [that morning] as I was getting in my blind. It all started clicking when I saw it move.”

After contacting the Minnesota Department of Natural Resources, Klocek was given the go-ahead to shoot the 3-foot gator. Alligators are invasive in Minnesota and not protected by law. Klocek speculated that the gator was likely released by an irresponsible pet owner, and knew that the cold-blooded critter stood no chance of surviving the coming harsh winter.

Next, he called an Army buddy, a guy native to Louisiana’s swampland, who advised Klocek to use a .22 handgun to “quickly and humanely” shoot the gator in the head. Klocek plans to have his taxidermist mount the unlikely pair.

“I’m going to do a full shoulder mount of the deer,” says Klocek. “It’ll be looking down to its right, with its ears pinned back like he’s ready to fight the alligator who will be on a mound of dirt looking back up at him, ready to snap.””

This opening day was one Klocek certainly won’t forget.

Klocek wrote in his now-viral Facebook post: “Only in 2020 can you go out to sit for deer gun season opener in Minnesota and shoot an alligator.”