206-Pound Albino Wels Catfish Could be a World Record

Bernie Campbell’s wels catfish was 10 pounds heavier than the world record, yet his catch pales in comparison to those... 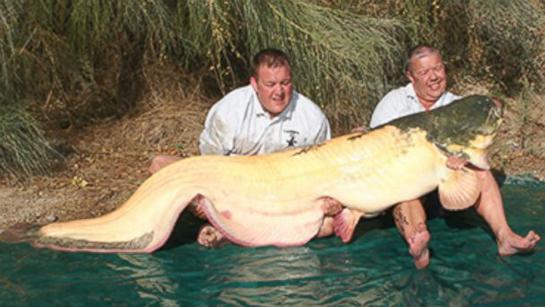 Bernie Campbell’s wels catfish was 10 pounds heavier than the world record, yet his catch pales in comparison to those in the record book.

The English angler caught an albino – yes, albino – 8-foot, 206-pound wels catfish while fishing on the River Ebro near Barcelona, Spain. Campbell said he had been trying to catch a record breaker for the past seven years. His world record catch is not yet official.

“We go out obviously to catch big fish,” Campbell told ABC News. “It’s just one of those things we joked about because they are 1 in 10,000, I would say.”

The 54-year-old said reeling in the monster ghost fish was extremely difficult. “It’s like fighting with a boss. If you could imagine putting a rope on the back of a car, holding on to the rope and letting someone drive away, that’s what it’s like. It’s power against power,” he continued. “You’re determined to get it in and the catfish is determined you’re not going to, and the best one wins. Fortunately, that was me.”

Mr. Campbell caught his spook fish while fishing with CatMaster Tours as well. He released the monster catfish after it was weighed.