No Man’s Land: The Hunt for a Giant Kansas Buck

A huge buck, a botched shot, and a tiny midwest town where the good old days of deer hunting still endure 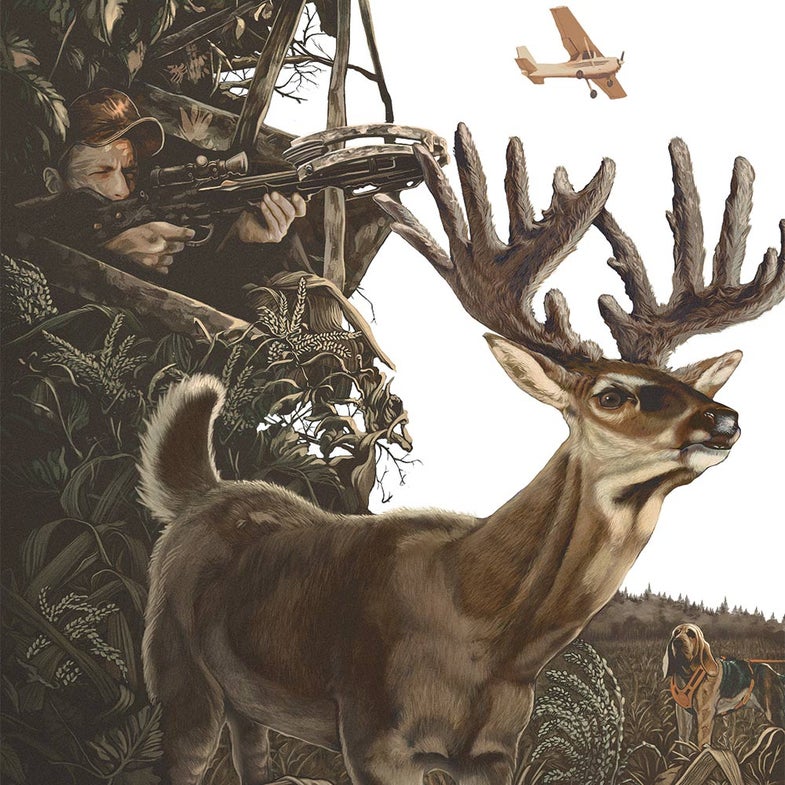 The buck we were waiting for showed up just before last shooting light. He materialized out of head-high Johnson grass just 50 yards away from the blind.

I slid off the safety on my crossbow and tracked the buck as he angled toward us and into the open, then stopped broadside. I floated the 40-yard dot just at the top of the buck’s vitals and squeezed. There was the thwap of the crossbow string, a hollow thud of the arrow hitting home, and then the fading rustle of the buck running off through the grass.

My buddy Matt Arkins, who was in the blind with me filming, clapped me on the back, and we had a quiet moment of celebration. The shot felt good, but we watched the footage just to be sure. In Arkins’ viewfinder, we could see the arrow hit tight behind the buck’s shoulder, maybe just a tad high. I called the landowner, Brett Courson, to relay the news: “We got the 18-pointer.” I had pulled into Courson’s farm town of about 1,000 people with the thermometer on my truck dashboard reading 98 degrees—​a scorcher of a September evening, even for southern Kansas. I met up with Courson and his wife, Heidi, at a lively little bar on the edge of town, and we drank Long Island iced teas (it was that night’s special, so what the hell) and talked about the upcoming hunt. Arkins and I had been down earlier in the summer to set trail cameras, hang stands, and brush in ground blinds with Courson (who Arkins had met previously on a video shoot). So for the last two months, he had been sending us updates and photos of shooter bucks slinking by our setups.

The most notable deer was the buck Arkins called the “18-pointer.” Really, the buck was a main-frame 13-point with a bunch of kickers, but neither Courson nor I challenged ­Arkins’ overenthusiasm. This was a 170-class deer and worth getting excited about.

As I drained another drink, I noticed that Courson—who is the father of two young, adorable kids—had a picture of the 18-pointer as the screen saver on his phone. Clearly, I wasn’t the only one with that deer on my mind. He could have easily picked up a muzzleloader or crossbow and hunted the buck himself, but instead he was letting Arkins and me take a crack at him. Courson is not an outfitter (in fact, he’s a co-op assistant manager).

I asked him why he didn’t lease his properties to an outfitter or out-of-state hunters to turn a profit on his bounty of big deer. The answer: He knew he had a good thing going and didn’t want to ruin it.

Courson and his buddies like to hunt (they’re almost all rifle hunters), and they like to shoot big deer. But somehow in this little pocket of Kansas, an obsession with giant antlers hasn’t spoiled the most enjoyable parts of hunting. So they sit their stands when the wind isn’t perfect, take out kids, show off trail-cam photos, hunt doves, and pass up lease dollars to let their friends and family hunt.

There’s a skinning shed in town that’s a testament to the crew’s hunting philosophy. If you happen to kill a deer—whether it’s a Booner or a doe—you haul it to the shed and bring a cooler full of cheap beer with you. With a few text messages, the hunters in town show up to cut meat and hear the story of the hunt. The shed’s back wall is full of 130- and 140-class racks (too small for these guys to shoulder-mount). Arkins and I ogled the antlers and asked who owned the biggest sets, but the guys couldn’t recall who had killed which buck.

The blood trail turned from splotches of bright red into occasional drips and then disappeared completely. It was dark now, and our search party—which consisted of me, Arkins, Courson, and the neighboring landowner, John Schupbach—spread out, casting our headlamp beams over grass and plum thickets.

Even as the blood ran out, I expected to find the buck dead, nestled under one of the thickets. A flash of white hair, a gleam of antler, high-fives and backslaps, a quick gutting job, and then back to the deer shed. “This is the biggest buck I’ve ever killed,” I would tell the guys.

But we didn’t find the buck within 100 yards of the last blood drop, so we backed out to take up the search again in the morning. Arkins and I watched the footage of the shot a few more times back at our hotel room. Then I stared at the ceiling until sunrise.

Soon we were on hands and knees, looking for flecks of red among the grass, sand, and brier. Schupbach and ­Courson had to get to their jobs, so ­Arkins and I set off and made big circles, checking the thickest cover. By noon, the temperature was in the high 80s.

While we were crawling down deer trails, Courson called his buddy (the town mayor) who pilots a small plane out of a grass runway. When the mayor heard our story, he offered to take us up to search by air. So we flew loops like a giant motorized vulture, hoping to find a brown depression or spot of white in the bean fields below. After two hours of circles, we gave up and put the plane back in the hangar.

A Shot in the Dark

But still, I believed. My last hope was Scott Beavin and his young bloodhound, Fudge.

I had found Beavin on the United Blood Trackers website and told him about the buck. The trackers on the site volunteer to find lost deer for nothing more than the challenging dog work, the satisfaction of helping other hunters, and some coverage of their gas money, so they want as many details as possible.

Beavin made the drive up from Oklahoma to meet us at 9 p.m. that night, and right away the jowly, ­good-natured Fudge got to work. He plodded his way through the grass, and I held my breath when he charged against his lead and pulled Beavin at a trot into heavier cover. Fudge had his nose down, and he was working back and forth like an excited bird dog. I was certain he would dig out the buck in some pocket of cover we had overlooked.

But 200 yards later, Fudge got turned around. Beavin worked him in every direction, but we could both tell he was off the track.

Unwilling to give up, Fudge, Beavin, and I picked through deadfalls and willows. I searched the thorniest patches—partly looking for the buck, and partly hoping to pay my penance. By 1 a.m. we had done nothing but bump dozens of deer off Schupbach’s land. The buck, Beavin declared, must still be alive.

Read Next: Hunting the Buck of a Lifetime

The next morning, with my hunt over, I pulled into the town’s only gas station, and the girl at the counter asked, “Did you guys find your deer?” Word travels fast here. I told her no, we did not. “Well, there’s plenty more of them,” she said. “I almost hit three on the way in this morning. You’ll get another one.”

I smiled and said thanks. And meant it more than she knew.

End of the Trail

That December I got a text from Courson—“The 18”—with a photo of a kid holding the rack of a giant buck in the town’s skinning shed. I zoomed in, and sure enough, it was the 18-pointer, though his G2 and G3 were busted off on the left side. But the kid in the photo, who turned out to be John Schupbach’s 15-year-old son, Tyler, didn’t seem to mind at all.

Schupbach had put on a one-man deer drive for his son, trying to force some action. It was a cool, quiet evening, and Schupbach made a push through the riverbottom while Tyler sat with his back to a cottonwood tree on a well-worn deer trail. Pushing a prime bedding area (the “sanctuary”) would be taboo for most private-land trophy-whitetail hunters, but these guys don’t worry too much about bumping deer. Before long, a few does and a young buck bounded down the trail past Tyler.

Then a heavy-racked buck appeared out of the bottom, 30 yards away, facing straight on. Without hesitating, Tyler raised his rifle and shot, hitting the buck square in the chest. He fired twice more as the buck crashed through the timber. This time there was no tracking job. Tyler walked up to the 18-pointer and ran his hands over all those tines and kickers.

At the shed, they skinned the buck and found a scar behind its shoulder blade. My arrow had passed through, hitting too high to penetrate the lungs and too low to strike the spine. The buck had shrugged off the injury to fight his way through the rut.

After the crew had taken care of the meat, Tyler posed for a few pictures with the rack and cape. It was the young hunter’s 15th deer, and the biggest buck he’s ever killed.