Bucks in velvet are predictable, but there are some key tactics you must follow to be successful 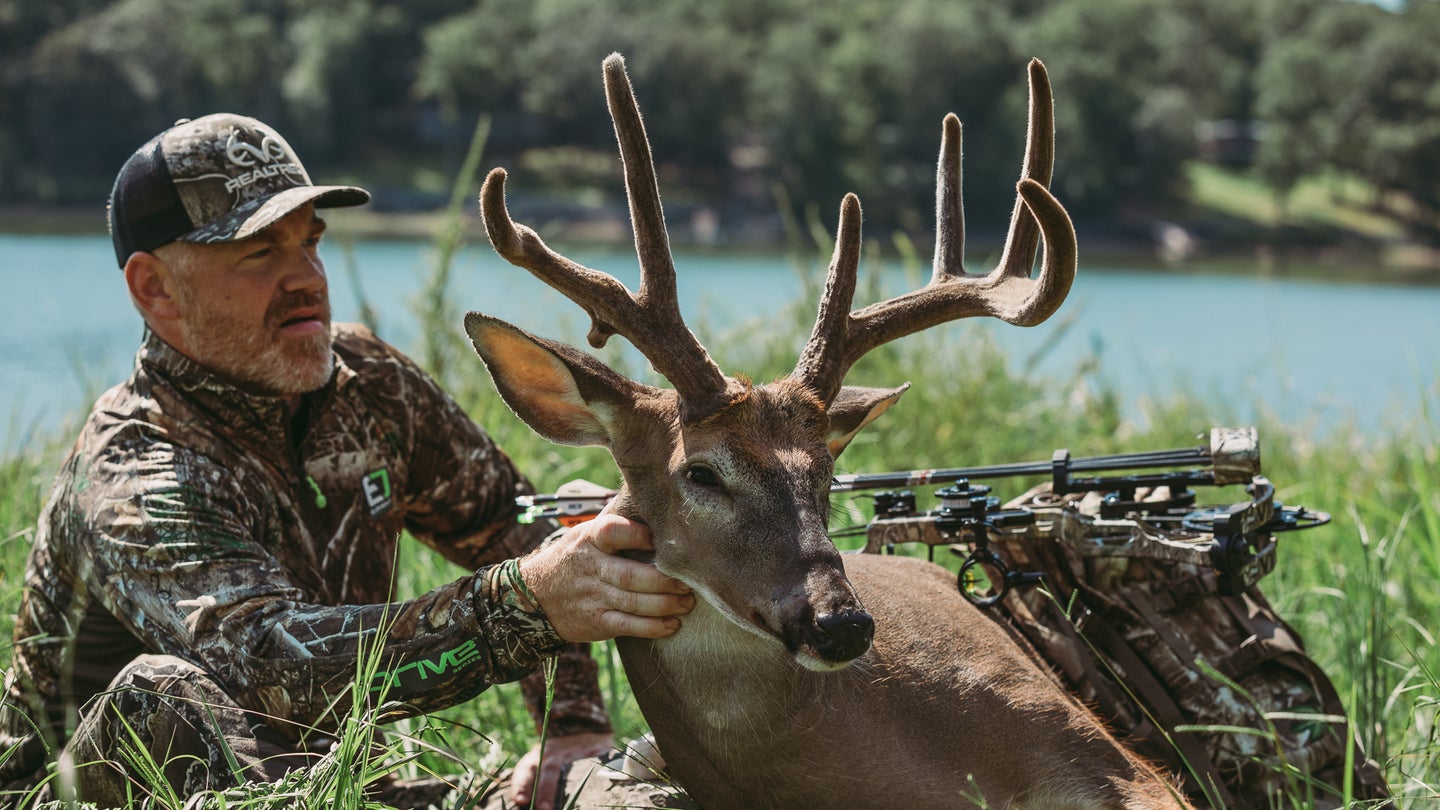 Over the last decade, many bowhunters have become obsessed with shooting a whitetail buck in velvet. This pursuit takes place in late August and early September when the temperatures are ungodly hot, the ticks are lively, and cottonmouths are still ready to bite. It’s not always a fun time to be in a treestand, but the reward of arrowing a giant buck in velvet is an almost unmatched experience in the whitetail world.

If you can stand the heat, insects, reptiles, and poison ivy, this hunt will be unlike any other. But there are a few things you need to know before you hit the deer woods. Your tactics will differ slightly in comparison to hunting the rut, plus you will need to know what states have seasons early enough to target velvet bucks. Here’s what you need to know and where to go.

The beauty of hunting bucks in velvet is that you can pattern them more easily this time of year. I’ve heard critics say that hunting a buck in velvet is too easy. And while I don’t agree that it’s a chip-shot hunt, I will say that the patterning process is much simpler compared to the months that follow.

Finding a velvet buck comes down to finding the food sources the local bachelor bucks are frequenting. Glassing from a distance in the evenings will allow you to see exactly where these bachelor groups are hanging out. They will use these same food sources day after day until they are pressured to move on, or the food source dries up.

In the South and Midwest, bean fields are hard to beat. You’ll find bucks using these fields in the evening when the temperatures begin to drop and shade cover creeps across the field.

Food sources play a big role in killing a velvet buck in western states as well. Hay fields host a ridiculous amount of deer in states like Montana and Wyoming. Finding preferred access trails to and from these fields will put you in the hot seat for an unbelievable early-season whitetail showdown.

What Are Velvet Bucks Eating?

Velvet bucks will be focusing on natural food sources, like acorns, berries, apples, and pears. They will also be feasting in ag fields (alfalfa, corn, beans, and milo), plus oat, cowpea, sunflower, chicory, and clover food plots will attract deer. Bucks are trying to gain as much weight as they can this time of year, because they are going to shed up to 25 or 30 pounds during the coming rut, so they have to be actively feeding. It’s worth scouting water sources too. Find out when your target buck is taking a drink. It may make sense to set up on him over water as opposed to the food source.

Once you’ve found the field bachelor bucks are using, it’s time to begin tightening things up and narrowing down exactly where the deer prefer to enter and exit the field. They’ll likely have more than one access route. Watch close enough, and you’ll discover which they prefer. Pay attention to which trails they use on different winds. Watch how they move in and out of the field and take note of the anything you think is causing them to take a different route—weather, time of day, thermals, etc. Knowing as much about the buck you are targeting is key to punching your tag on opening day.

Scout the Morning, Hunt the Afternoon

For the most part, a velvet buck hunt is an afternoon endeavor. Sure, you can kill them in the morning, if you can access your treestand without disturbing bucks feeding in the field. This time of year, the bucks will often feed at night and then move to cover as daylight approaches. You are better off watching the bucks from afar in the mornings, gathering as much intel as you can on them, and then getting into your treestand for an evening sit. Slip in undetected mid-afternoon and be ready when the first deer steps into the field. Most bucks are going to be coming out of a cool, shaded area that offers whatever breeze is blowing that day, so focus your attention on those areas and hunt as close to them as possible (if the wind allows for it).

Remember, this isn’t an all day endeavor like hunting the rut. Don’t burn yourself out sitting in the scorching sun for hours at a time. It’s unlikely a buck will stroll past your stand mid-day. They are bedded in the shade, and you should be too.

Read Next: Bowhunters and Crossbow Hunters Are Killing More Deer. Is That a Bad Thing?

The provided dates below are for the 2021 season and subject to change in the future.

Deer hunters have been kicking off their whitetail season in Montana for many years. Depending on how the opener falls, you may or may not find a buck still holding his velvet. With many bowhunters focused on bugling bull elk this time of year, the faithful whitetail hunter can find ample opportunity across the state to punch a tag on a velvet buck.

If you’ve spent much time watching outdoor TV, you’ve no doubt witnessed a whitetail hunt from the state of Wyoming. One common theme from a deer hunt out west is the abundance of white-tailed deer feeding in alfalfa fields. These fields are few and far between, so they naturally draw nearly every deer in town. It’s not uncommon to see hundreds of deer in a hay field in the evening. Most of these hotspots are located on private ground, placing Wyoming among the best of the best for a guided hunt.

North Dakota flew under the radar for many years as a sleeper state for deer hunting. However, thanks to outdoor writers and outdoor TV, the secret is out. Many bowhunters now make the annual pilgrimage to the plains of North Dakota in search of velvet bucks.

The archery opener always falls on the Friday closest to Sept. 1. On some years, that means an opener kicking off in August, well within range of a velvet buck opportunity. North Dakota has an abundance of public land hunting opportunity. You can also hunt private land as along as it isn’t posted, but you should ask for landowner permission regardless. First off, it’s common courtesy to let a farmer know you are accessing his property, and you may also get a location on a good buck if you actually go and talk to him.

Kentucky has been a top velvet buck destination for countless hunters east of the Mississippi River. The dates for the Kentucky archery opener change each year depending on how the weekend falls. Some years, the opener is on Sept. 1, and in other years it’s a week later. The one week of time can make or break your chances for killing a buck in velvet. A lot happens during that first week of September. The majority of bucks are still in full velvet on Sept. 1, but by the end of that week, it’s a different story. Hard-horned bucks are the norm when the opener falls closer to Sept. 7 Kentucky allows baiting, giving hunters ample options beyond waiting for deer on a field edge.

The Volunteer State is one of the newest opportunities to bowhunt a buck in velvet. In recent years, the state created a three-day hunt in late August for bowhunters willing to climb into the stand a month before the regular season kicked off. The hunt is limited to private lands only, with the exception of a few CWD zones that have extra opportunities beyond the statewide hunt.

South Carolina is one of the earliest states in the country to offer deer hunting opportunities. The state is regulated by zones, with some of the regions opening for deer hunting as early as Aug. 15. South Carolina may not be known as a trophy whitetail destination, but they do have a lot of deer.