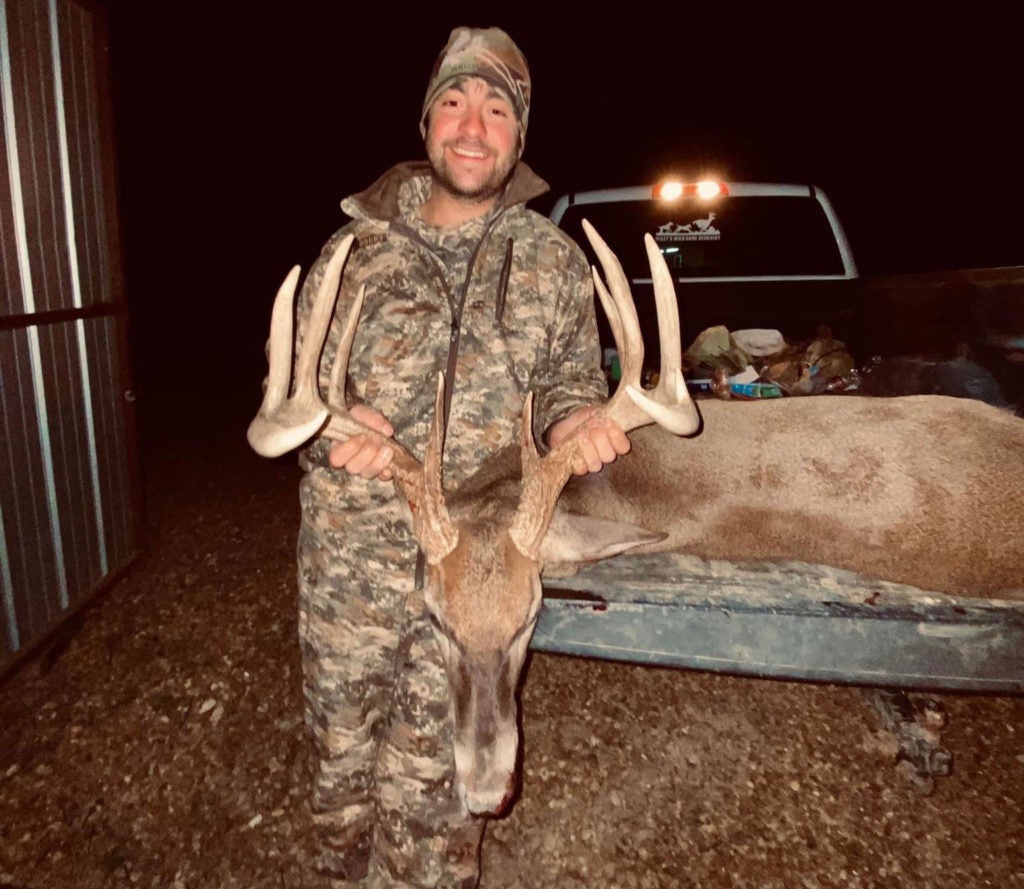 Catahoula Parish in central Louisiana is prime Southern farm country. Flanked by the cities of Alexandria and Natchez, it’s a land loaded with game, and plenty of buster bucks are taken there annually. So when Bubba Wiley climbed into a box blind on Jan. 9, he was planning to be selective. But that philosophy didn’t extend to wild hogs, and when three stepped into the open, he didn’t hesitate. He dropped two boars with his .308 Savage, and called it a night. But Wiley returned the following day.

“I got into the blind early, about noon, knowing deer should be moving that afternoon,” says the 26-year-old Texas oil field worker, who lives in Jonesville, Louisiana.

The blind was located in a block of woods that Wiley hadn’t hunted until this season, after he cut several shooting lanes through the tangled timber. He sat for several hours without much action, but about 4 p.m. things got interesting.

“I started seeing some does, and between 4 and 5 p.m. I saw eight different racked bucks. They were small bucks though, and we try not to shoot any that are less than 5.5 years old. So I just sat and watched them, hoping something bigger would show.”

Wiley’s patience paid off, and at 5 p.m. a much bigger buck stepped out 40 yards from the blind.

“I watched that buck for 30 minutes trying to figure out if he was old enough to shoot,” Wiley says. “I recognized the buck from trail camera photos we had of him in 2020, and while his body size was smaller because he was worn down from the rut, he was plenty big enough to shoot—though I just didn’t know if he was 5.5-years old.”

Wiley finally convinced himself that the deer was a shooter, and since the buck had disappeared from the property for over a year, there was a good chance he’d never see the buck again if he passed. When the buck was at 40 yards, he squeezed the trigger.

The buck ran off, stumbling, and although it looked like the buck had gone down, Wiley wasn’t quite sure.

“I have a good pack of trailing dogs—including some Catahoulas—and I almost went to get them but decided to go look for the deer first,” he says. “I went over where I shot the buck, and he was laying dead just 40 yards from where I hit him.”

The buck was younger than he’d hoped, likely a 4.5-year-old, but the main-frame 10-pointer had a scorable kicker point and measured an impressive 165 6/8 inches. The buck’s inside spread taped out at 17 3/8s inches, and the main beam bases had 5-plus-inch circumferences.

“He only weighed 190 pounds, because he was so thin from chasing does during the rut,” says Wiley. “He should have weighed 230-pounds or more, and we’ve had much bigger bucks taken on our property, up to 267-pounds.

“They eat pretty good on our crops hereabouts.”

The buck is the best-scoring deer Wiley has taken, and he’s having it mounted—5.5 year old buck or not.