Have you ever seen The Phantom of the Opera? (I know what you’re thinking: This is a crappie story—what the... 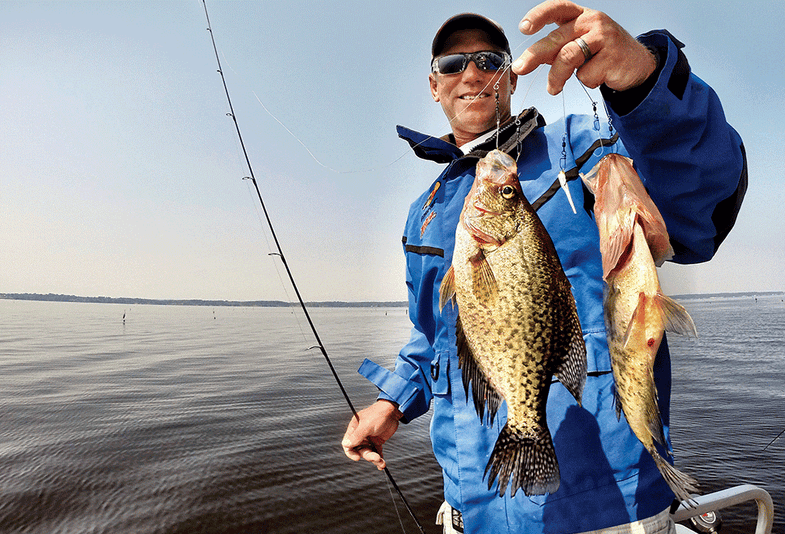 Have you ever seen The Phantom of the Opera? (I know what you’re thinking: This is a crappie story—what the hell does a Broadway play have to do with catching panfish? And I also know there are a couple of you thinking that you could see the connection if the name of the fish were spelled “crappy.” Bear with me.) In the musical, there is a scene in which a giant chandelier comes crashing down on a ballroom full of people, creating the most epic scene of the show. Jerry Thompson (ltdguideservice.com), a veteran guide on Toledo Bend Reservoir, may well have had that in mind when he modified a traditional freshwater umbrella rig to drop a school of live minnows on the heads of unsuspecting crappies for the most unbelievable of December bites.

“There is a mile-long stretch mid-lake on the Texas side that the locals call the chicken coop—there was once a chicken farm on top of the hill adjacent to this area,” says Thompson, who has earned the moniker Phantom of the Bend. “It is more than 50 feet deep, and straight across the lake is a huge spawning flat. So in the winter, when water temps get below 55 degrees, enormous schools of crappies stack up in 25- to 50-foot depths and offer nonstop action—if you can get them to bite.”

Sure, you can drop down traditional crappie rigs with a weight and one minnow and catch a fish or two. However, Thompson’s chandelier rig offers several key benefits.

“First off, make sure that you’re using an umbrella rig with a lead head and the thinnest wire you can find. Just add No. 2 Aberdeen hooks to the outside arms with the smallest minnows available and a small jig to the middle arm, and you are ready to fish. The reason to use this rig is not to catch five crappies at a time, but instead to excite a school to start eating,” Thompson explains.

Get Schooled
Thompson guides an average of 200 days a year for crappies, and as of this past September, he and his fellow guides have cleaned more than 39,000 fish this calendar year. Yes, he knows a thing or two about the behavior of these panfish.

He prefers to guide six people at a time over two, because when six minnows are in the water, a wad of crappies is much more likely to get active. And once a fish bites, the remaining fish in the school often follow suit.

“The only real trick is finding schools of fish, which really isn’t that hard if you have good electronics. I’ll zigzag the steep bank from no shallower than 25 feet out up to 50 feet. Once you see the fish, all that’s left to do is feed them,” Thompson says.