You’ve undoubtedly heard that saying about close only counting in horseshoes and hand grenades. I remember the first deer I... 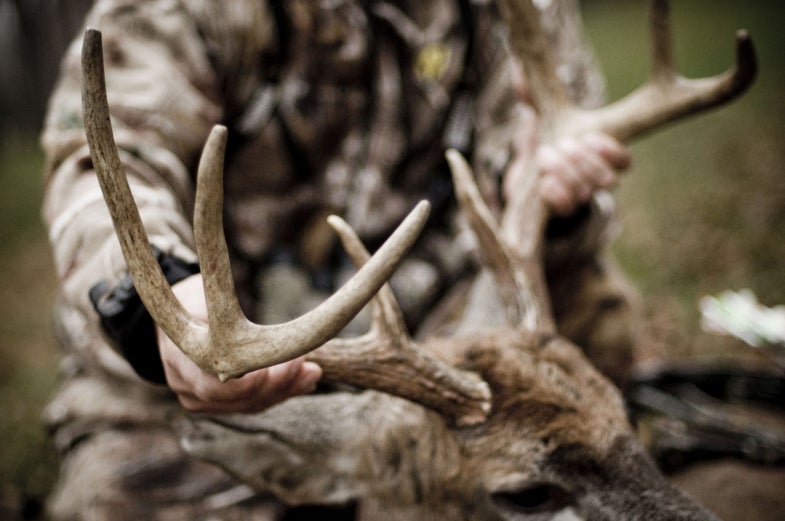 You’ve undoubtedly heard that saying about close only counting in horseshoes and hand grenades.

I remember the first deer I ever shot at with an arrow. It was a frosty October morning in southern Michigan, the first day of the archery season.

I was home from school because I had an orthodontist appointment later in the day. I suspect my dad had plenty to do with the timing of that because he was hunting with me that morning. Someone needed to deliver me to the office after all.

Three bucks appeared in the hay field. I drew my ProLine Zephyr Magnum and let an arrow fly. I don’t know that I even aimed. I suppose I figured with three bucks standing in a group, I had pretty good odds of hitting one if I just fired into the flock.

I missed. Badly. If my arrow had been a hand grenade, it might have done some damage. Maybe.

The bucks were 64 paces. Even measured by the shorter legs of a 12-year-old that’s a pretty long poke.

I’ve never shot at another deer at that distance with a bow again. If I have things my way, I never will.

While the world of modern bowhunting has been more and more about speed and distance, I’ve found myself wanting to go in the opposite direction.

I care not about an arrow that travels 300 feet per second. I care about putting myself in a position to see mature whitetails doing the things that they do and having not a clue that I’m 20 feet up the tree that’s 15 yards from them.

This is not a statement against hunting with guns. A rifle adds a whole lot of range to things and I admire those who can shoot accurately.
That said, I’ve killed a fair number of whitetails with a bullet. In fact, the first buck I ever shot was taken with a rifle in Michigan’s Upper Peninsula.

I enjoy all forms of deer hunting and appreciate the fact that some prefer gun season over bow season. Every hunter has his or her own take on “the best” and I’d be lying if I said the deer I’ve shot with a gun provided the same experience for me as the ones I’ve killed with a bow.

It was all about the proximity.

Somehow it’s as if I felt like I was merely an observer, watching things unfold instead of taking an active part in it.

Today’s bows are fast. They’re flat-shooting. They’re efficient. There is no question that, in the right hands, a well-tuned bow is more than capable of consistently punching deer in the lungs at long range. Today’s bowhunters are more capable of making those shots now, too. They practice more. They have better training, better information, better tools.

I suppose I’d consider myself a better-than-average shot and don’t have much trouble shooting solid groups at 50, 60, and even 70 yards during summer practice sessions.

Yes, I’m capable of killing deer at those distances with an arrow. But here’s the deal: I don’t want to.

I won’t say that I’ll never shoot an arrow at a deer past 40 yards. There are instances where I would – and I have.

I can, however, say that the experience just isn’t the same for me.

The biggest buck I’ve ever killed in my home state of Michigan was taken at 47 yards. I hunted that buck for four years and was thrilled to finally close the book on it.

The truth is, though, that I felt a pang or remorse when recovering that buck. I had hunted that deer so hard for so long, I felt as if some of the experience had been taken away when the shot was longer than desired.
The decision is yours. You can shoot whatever buck you want so long as it’s legal.

You can shoot whatever distance you choose so long as you’re capable of doing so.

Me? I’ll stick with what I enjoy.

For me, close counts.