Whitetail Deer: Is the October Lull Fact or Fiction for Bowhunters?

If you’ve been at the game of whitetail bowhunting for at least a few seasons, you’ve likely heard the term... 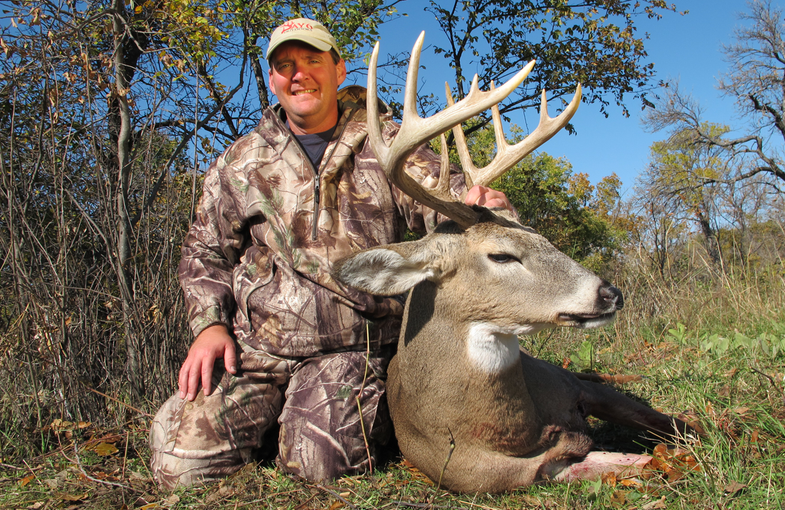 If you’ve been at the game of whitetail bowhunting for at least a few seasons, you’ve likely heard the term or experienced the success-robbing phenomenon known as the “October Lull.” Is this a real thing? Can it be overcome? For the answers I spoke to a cagey whitetailer who believes most people simply don’t understand how and where to hunt during this mysterious period.

First let’s back up. For the lucky few who haven’t traveled the lonely road that is “The Lull,” this period is typified by greatly reduced daylight sightings of mature bucks. These are deer that just weeks ago were seen regularly flashing impressive headgear in local ag fields in late evening. Indeed, the October Lull falls more or less between that golden, early season of plenty, and the crisp, energizing pre-rut, when “ghost” bucks again begin stirring—and most of us recall, once again, just how fun bowhunting can be. For some, the pre-rut action can be a long time coming. Classic lull states feature mid-September bow openers and a classic, early November rut.

Andrae D’Acquisto, the founder of Lone Wolf treestands, has always been a bit of a lone wolf when it comes to his bowhunting, and his thoughts on the October Lull certainly qualify. D’Acquisto’s ground-breaking stand designs continue their reputation as some of the best premium models on the market, and the big-buck guru has used them to take the majority of his dozens of record-book-sized trophies—during one specific month. Can you guess?

“When most guys are experiencing what they call the ‘October Lull,’ it’s actually a case of the mature deer making circles around established, over-hunted stand sites,” he said. “You think those deer aren’t still moving around? They’re just making circles around sloppy hunters. I feel the best time to kill a big deer is during the October Lull—I’ll bet 80 percent of my deer come from that time period. And in talking with some other good trophy hunters, I’ve heard pretty much the same. Because we’re always out moving around reading sign, we’re staying on those big deer. So we’re always patterning the deer—not letting the deer pattern us.”

D’Acquisto is known for hunting trophy bucks aggressively. He won’t hesitate, for example, to hang a stand in a spot where he’s just bumped a trophy buck from its bed—and wait for the animal’s return. As you might guess, D’Acquisto explained that this tactic is not as easy—or as cut and dried—as it sounds.

“Let’s say I’m going to a new property that I’ve never hunted before,” D’Acquisto said. “In years past, it would take me almost a whole season to learn that property, to learn where the deer are bedding, and traveling through. These days, I like to show up two weeks before I hunt it. I’ll walk virtually every inch of the property and learn where most every deer beds, and I’ll read the sign, and jump specific bucks. And I can learn all that I need to know in basically a weekend of tiptoeing around. And then you’ve got a lot of the information without having to burn up a whole year.

“At other times, during the rut, because I do so much scouting I’ll find where bucks have found a doe in heat, and I’ll know it because I’ll jump several bucks in a tiny area. Somewhere there will be a doe in heat bedded in there, and another indication is that the bucks won’t jump up right away and run off. They’ll kind of stand around or jog off a ways, but linger. I like to jump right on those spots, and hang a stand immediately. To have found that kind of a situation just by hunting, that would be almost impossible” to find if he was scouting remotely.

“I get a kick out of guys who think that if you jump a deer, he’s going to run five miles away. They just don’t do that,” D’Acquisto says. “They have a home range, and if you know it, and know where he’s bedding, the better off you’ll be. That’s the best information you can have. If I know where a big guy is bedding I feel it’s just a matter of time.”

Scouting as often and as hard as D’Acquisto isn’t for everybody, but he warns that whatever your timetable, you must be smart about your approach.

“There’s a time to go running around and looking for sign like a bull in a china shop, and a time to be stealthy,” he advises. “When you don’t want to screw up a spot, and still find out where a big guy is bedded, I’m going in with the wind in my face. And as soon as I jump that deer, I’m dumping down, out of sight. Often, they won’t even know what bumped them.

“I think it’s all in peoples’ minds about not hunting where they jumped a big buck. Very few have the confidence to hunt that spot, because maybe it’s something they heard or read. Personally, I just can’t wait to dive into a new property and get in there. And a lot of it has to do with the size of the property. Maybe a guy already knows the property, and he handles it a little differently. If you only have a 20-acre area, you certainly don’t want to bump a deer onto the neighbor’s property. But when I hunt 400- to 600-acre parcels, sometimes I’ve intentionally pushed the deer and stacked them all on one side of the property. I’ve been doing this enough that I can really manipulate the deer, and how they react. Would I do that on 20 acres? No.”

For D’Acquisto, regular, intense scouting has become a way of life. As you might guess, he believes most hunters simply don’t scout enough, and get set in their ways—whether hunting new or familiar properties.

“Hunting year-old sign is one of the biggest mistakes I see, and not that year-old sign is bad, but in general most people don’t scout enough and they hunt too much,” D’Acquisto opines. “If you could hunt a day and scout two, your percentages for mature buck success would go way up. Most people find one good spot and jump right in it. I’m in a continuous cycle of scouting, then hunting, then looking for a new spot again.”

One last tip from D’Acquisto can span several periods of the rut, and apply even in the early season. What is it? Hunt hot sign when you find it.

“A lot of guys will go in and set up a stand site in what they’ve determined is a hot spot—and then hunt it a day or two later,” D’Acquisto explained. “They just took their best opportunity, and let it cool down. I have stands that ‘turn on’ at certain times, and I’ve got to know when to use them. As an example, I found one spot that suddenly had huge rubs the size of your leg. It was just torn up, but the next day I was leaving for a week of hunting elsewhere. I came back and the spot was ice cold. That opportunity had to be captured then and there. I needed to be there the next morning—not a week later. That’s one of the biggest handicaps out there. A typical bowhunter who hunts weekends will think he’s figured out a hot pattern, and then he goes home, and a week later everything’s changed.”