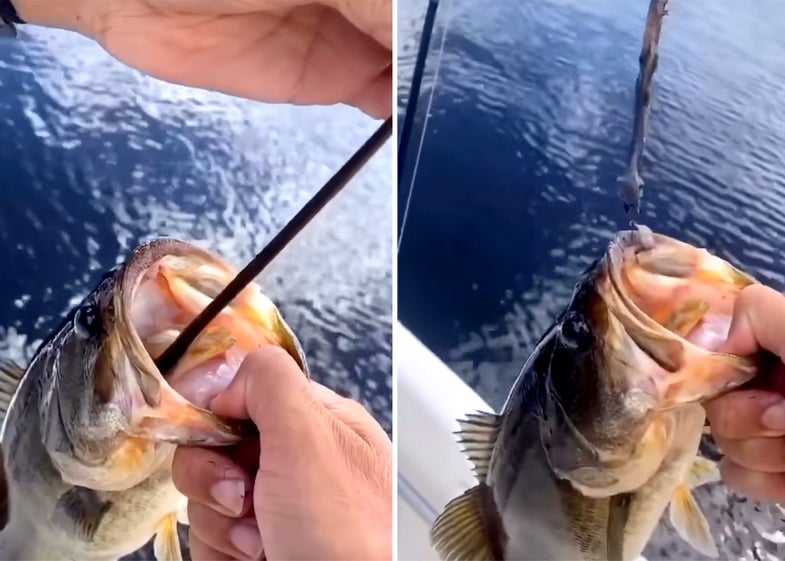 If you were thinking the seven-inch Senko you’ve been fishing is too big for the largemouth in your local lake, this footage might change your mind. Shared to Instagram by Panfish Nation, the video shows an angler in Florida pulling a roughly 22-inch snake from the gullet of a 16-inch bass.

Unlike the snake it shows, the silent video is relatively short. The video begins with a close-up of a Florida largemouth being lipped by an unknown angler. With his right hand keeping a firm grip on the bass’s jaw, the angler starts tugging at the fish’s most recent meal.

Over the next 20 seconds, the angler slowly pulls on the stretchy snake. Much like the classic “infinite silk” magic trick, the angler just keeps pulling and pulling. At one point, you can see the spinal cord of the partially digested snake, and toward the end of the video, you can see its flattened head as the angler successfully pulls the snake all the way out of the fish’s mouth. Another angler then holds the chewed-up snake alongside the bass, showing that the serpent is at least half a foot longer than the fish that swallowed it.

Most of the social media reactions to the video take pity on the bass, which was “robbed of his meal” by the curious fisherman. Largemouth bass are a hearty species, though, and the fish almost certainly survived the ordeal.

Although it might seem strange to the non-angling public, checking the stomach contents of a live fish is a fairly regular (if controversial) practice. It’s more common in the trout-fishing world, where the fish eat mostly small insects and are released more often than they’re kept.

“Using a stomach pump is a very controversial subject among fly fishermen/women,” according to Minturn Anglers, a guide service in Colorado. “Walking up to the register of a fly shop with a stomach pump in hand will likely land you more dirty looks than a whore in church… But the best guides I know all carry stomach pumps, and for good reason.”

The Minturn Anglers’ website goes on to explain the right way to pump a trout’s stomach, adding that “pumping causes far less harm to a trout than most other human interactions such as big barbed hooks, improper handling, or swallowed lines/hooks.”

Bass tend to have very different eating habits compared to trout, however, and largemouths have a reputation for eating extra-large meals on a regular basis. Whether it’s a chunky bluegill, a duckling, or a two-foot snake, hungry bass won’t hesitate to swallow prey that’s as big or bigger than they are.

This also means that the small turkey baster pumps sold at fly shops, Cabela’s, and other retailers aren’t as useful on bass and other warm-water species. According to fisheries professor Mark Cornwell, who wrote an article about stomach pumping for Bass Resource, biologists typically “lavage” bass, which is a medical term for flushing out the stomach with a liquid-filled syringe. Compared to yanking food out of a bass’s gullet with your hand, this technique is far safer for both the angler and the fish.