Tips and Tactics: How to Hunt Ducks

To the casual observer, duck hunting may seem more misery than recreation. It’s too hot when teal season opens and... 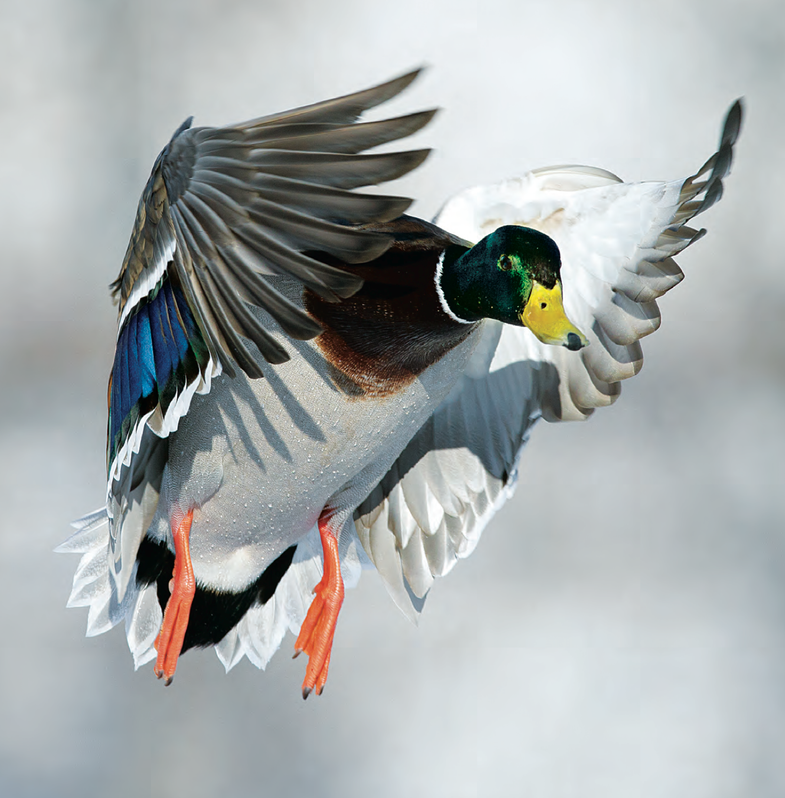 To the casual observer, duck hunting may seem more misery than recreation. It’s too hot when teal season opens and darn frigid by the time the mallards arrive. The duck hunter spends more money on boats, decoys, and nontoxic shot than any mother-in-law would ever approve of—all to lather his pricey accouterments in cold December mud. He hunts in rain the likes of which no self-respecting duck would ever fly in. He sledgehammers holes in iced-up ponds just to position his decoys and wait. All of this, if he’s lucky, to shoot the occasional bird.

Ah, but rewards are to be found for such efforts. Any given day in the marsh could result in a brace of mallards, a long-sprigged northern pintail, or even the king of them all: a bull canvasback. It is this diversity of species that so affects duck addicts. Most do not pursue waterfowl for the sheer volume of shooting, though, to be certain, all relish those rare days of duck-filled spectacle. Rather their captivation stems from the rich breadth of North American waterfowl, all of them uniquely interesting and beautiful. 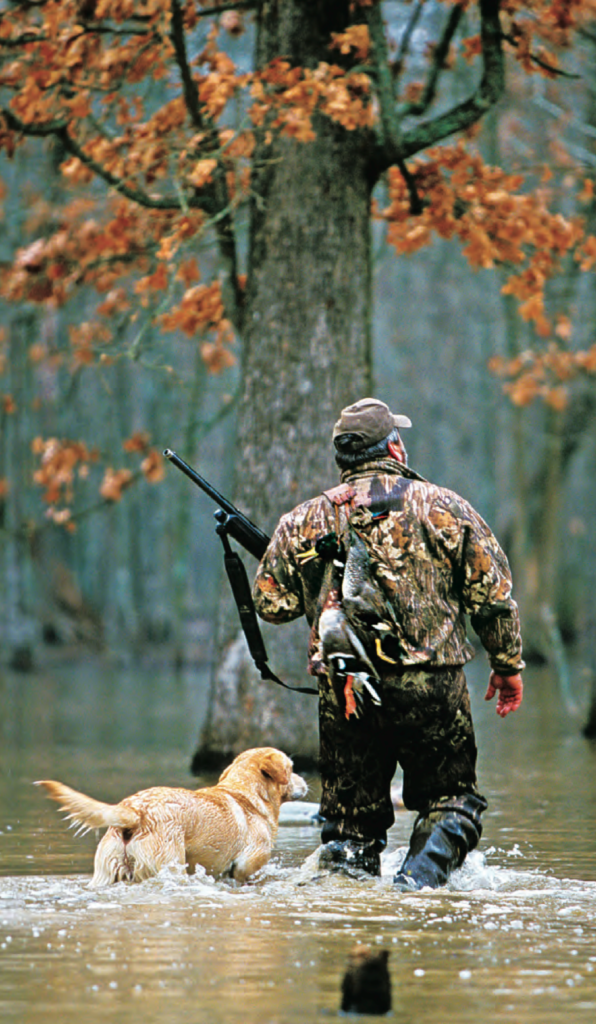 There are the dabbling or “puddle duck” species, which in North America include the mallard, American black duck, wood duck, American wigeon, gadwall, northern shoveler, three kinds of teal, and more. There is much habitat variation, from the tree-cavity nesting, acorn-feasting wood duck to the wigeon, which nests on the ground and has a gooselike affinity for meadow grasses. But all share a commonality: an act known as “dabbling,” which involves tipping their tails up to feed on aquatic plants and invertebrates just below the water’s surface. Unlike diving species, their large wing-to-body ratios facilitate springing rapidly from water to flight—an ability that has spared many from the fowling piece.

That is not to say divers lack athleticism, as any hunter who’s tried to match his shotgun swing to the speed of rocketing scaup well knows. However, their wings are proportionally smaller and their feet set farther back on their bodies—these are ducks built to dive deep for food. North American species include the canvasback, greater and lesser scaup, redhead, common and Barrow’s goldeneyes, ring- necked duck, ruddy duck, and assorted mergansers, among others.

Duck-hunting strategies are as varied as the birds themselves, from jump-shooting ponds to floating creeks to—by far the most exciting—gunning over decoys. The basic puddle duck spread consists of
at least a dozen decoys arranged over water in a loose U-shape. The curve is directed into the wind, providing a landing zone as ducks pitch in against the breeze. Include decoys you expect to target, but err on the side of mallards. The drakes’ heads act as big green beacons to passing flocks, and, most importantly, all puddle ducks decoy to mallards. Ducks known to dry-feed, especially mallards and pintails, can also be targeted in rice, corn, and other agricultural fields. Spreads generally consist of full-body or silhouette mallards and geese.

Even if honkers aren’t in season, their black-on-white contrast affords great visibility, and hungry ducks know that finding geese means finding food. The setup is best whenever ducks are starved for carbohydrates, such as during sudden, bitter cold. 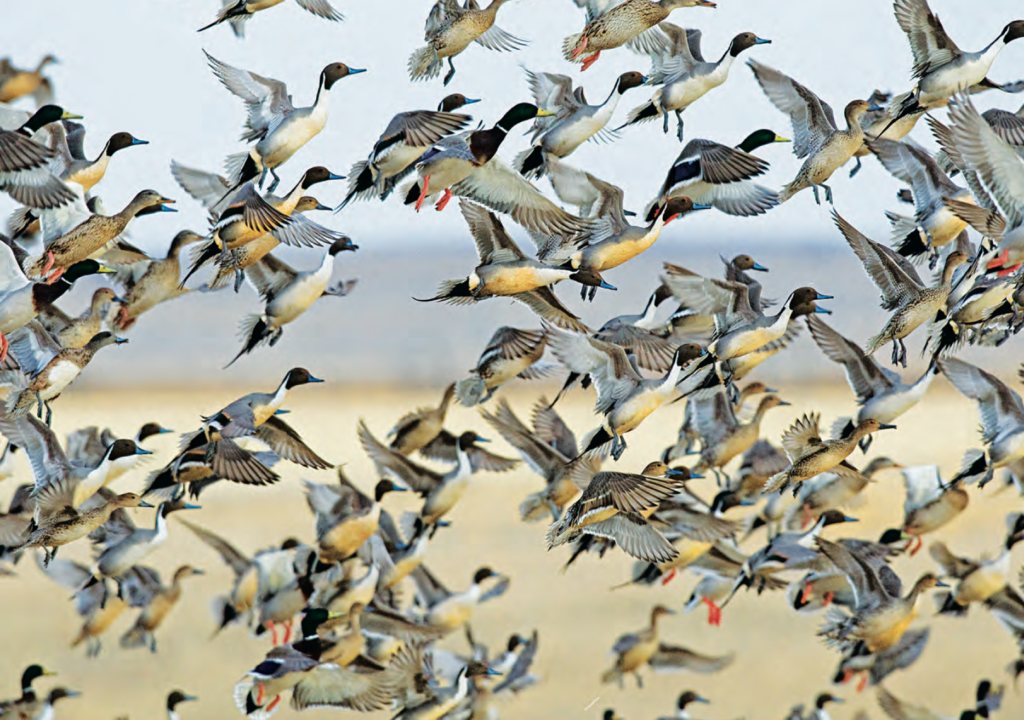 Diver spreads tend to be larger—2-3 dozen decoys, minimum—simply because divers raft in substantial numbers. Ideally the spread is positioned over a sandbar, oyster bed, or other active food source. Whereas dabbler decoys are usually individually rigged, divers are often arranged using long-lines, in which a dozen or more decoys are strung across a single cord anchored at each end. This hastens setup and saves cord when hunting deep, diver-friendly waters. Single decoys are pitched alongside the long-lines for a natural, nonlinear look. For an easy, effective spread, try a decoy-filled triangle with the nose facing into the current. If there’s no current, face the nose into the wind. Divers naturally feed in this manner and, well, it really works.

No matter your target, you may become a naturalist of sorts. Learning about and observing never-before-seen species are thrills all their own. So why shoot them? In short, it is a hunter’s paradox of the truest kind: The waterfowler hunts ducks because he loves them.—K. W.

Canvasback: King of the Ducks

No waterfowl species is spoken of in hushed tones in quite the same way that canvasbacks are. Rich in lore and history, canvasbacks were the most prized birds of the market- gunning era. 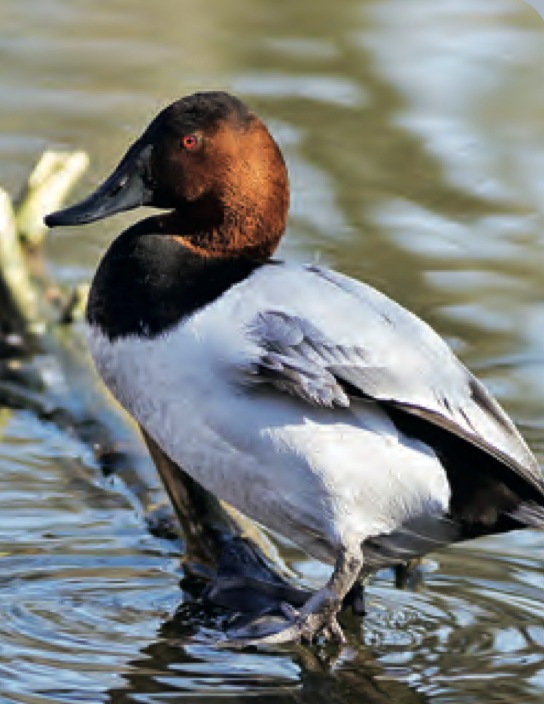 So tasty is a roasted canvasback that, until the early 20th century, fancy restaurants in major United
States cities served them—for an expensive price. The consequences were disastrous. Canvasbacks were highly overgunned, and the destruction of their favorite food, wild celery, proved a double whammy.

The population never fully recovered, and for much of the ‘90s and ‘00s the season was closed. A new age of optimism is upon us, however, as rebounding canvasbacks—fueled by consecutive wet springs—have resulted in a nationwide limit of at least two birds daily.

It is a joyous hope that a new generation will now experience the rush of hunting North America’s largest, fastest, and perhaps most beautiful duck. For me, it is the only bird that provides a sense of having shot big game. 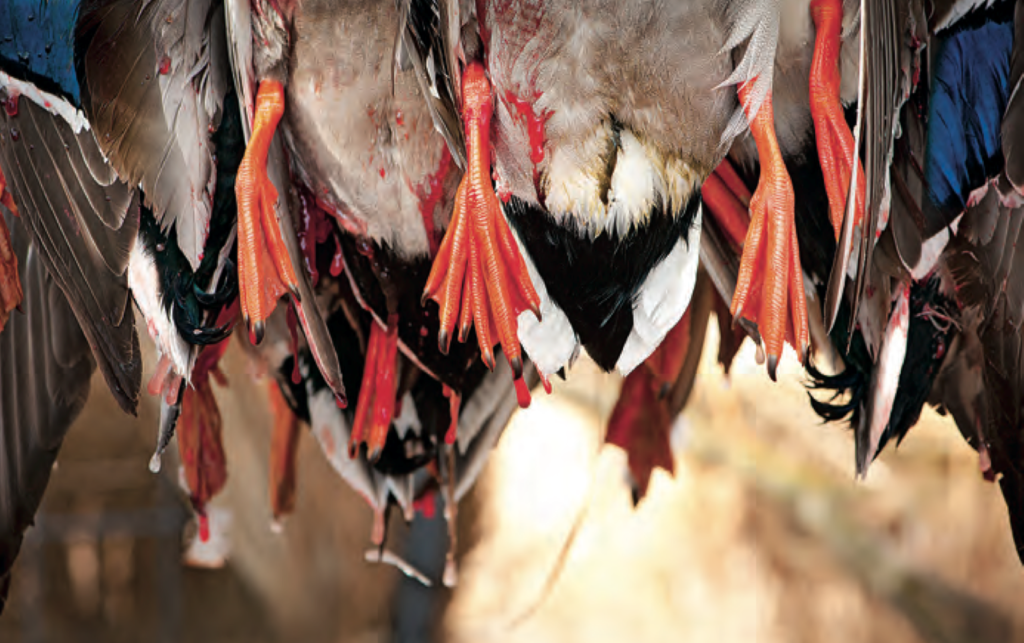 The Challenges of Mallards

Hunters who bag but one duck after a long day on the water may return home plenty happy—assuming that duck is a mallard.

The mallard is a lovely bird, with an iridescent green head, chestnut breast, and brilliant blue speculum that must be examined in the hands to fully appreciate.

However, its trophy status owes more to its distinction as perhaps the most challenging species. Neither shovelers nor teal nor gadwalls possess its discerning eye for the tiniest glint of gun metal or out-of-place decoy.

Hunters who consistently bag mallards are doing something very right, as these birds aren’t lucked into with regularity. It is our great fortune that mallards are also the world’s most widespread, numerous duck. Otherwise, their inclusion in a duck strap would be a rare event indeed. 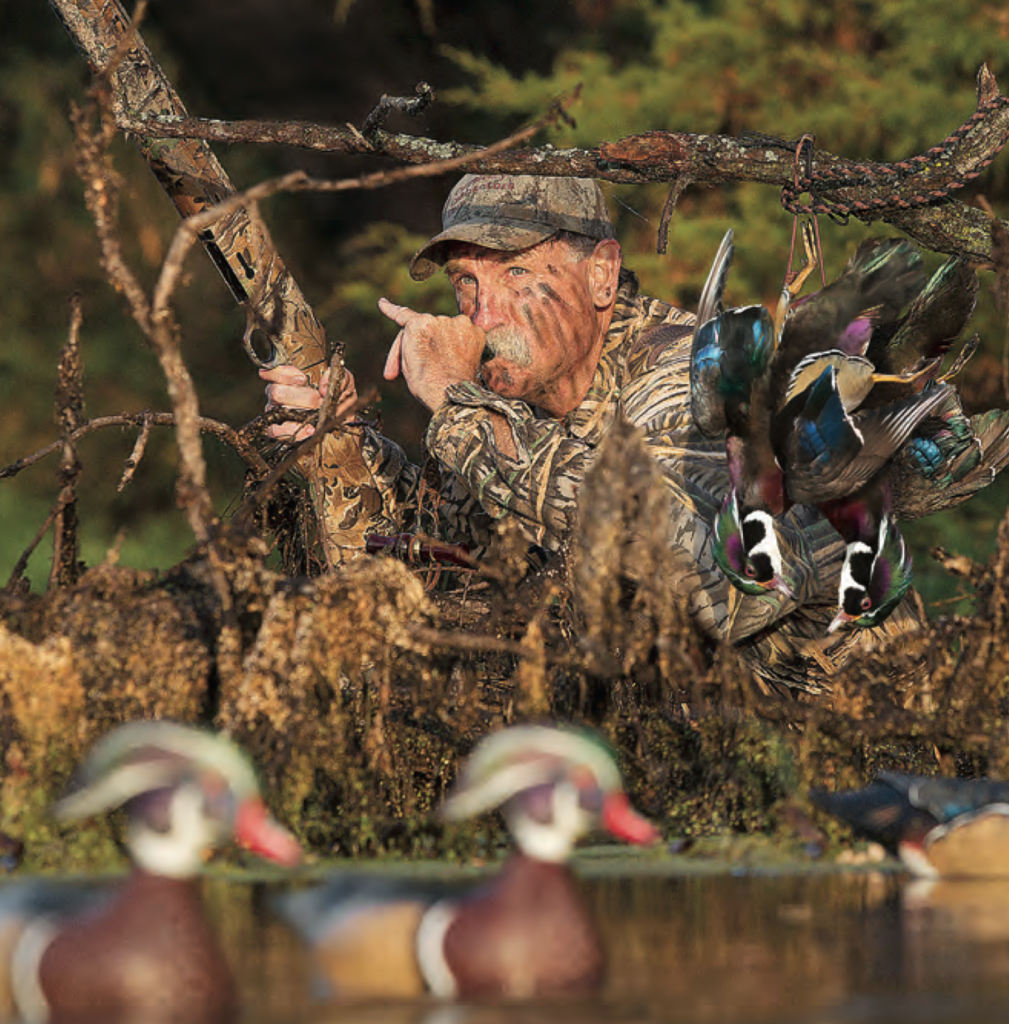 There are truly only three essential duck sounds to master: The basic quack, greeting, and comeback calls. The quack should be learned first, as the others are derivatives of it. It’s essentially achieved by saying “ten” or “qua-CK” into the call. Note that you must actually “talk” into the call from your diaphragm; simply blowing air over the reeds results in nothing more than kazoolike notes. Use quacks to keep the ducks’ attention as they circle, coaxing them in.

The greeting call is employed when ducks are initially spotted and their attention is sought. It’s a smooth series of 5–7 quacks, each descending in length: “Quaaaaack quaaaaack quaaack quack quack.”

If the greeting call doesn’t elicit a response, or the birds circle and begin to leave, try a comeback. It’s similar to the greeting, but the 5–7 notes make up a faster, more urgent plea. Instructional recordings can help you perfect these calls and others, but there’s no substitute for studying a performance by actual hens. Even listening carefully to those at a city park can improve your craft.

Gear Up: Chokes and Loads

Arguments over duck loads tend to center on pellet size, primarily whether No. 2 or 4 shot is the superior choice. It’s a little more complicated than that, however, given the varied duck-hunting scenarios. Here are a few basic considerations.

For most hunts, the author’s choice is a 12-gauge, 11⁄4 ounce load of No. 2 shot with modified choke. It provides enough oomph for reasonable pass shooting, yet patterns nicely on decoying ducks at 20–40 yards (or meters).

However, creeks, ponds, and sloughs tend to offer in-your-face action, so a 12-gauge load of No. 4 steel is the author’s preference. No. 4’s are plenty lethal at 25–30 yards (or meters)—why reduce pattern density by selecting larger pellets? Tight chokes are also, if anything, a handicap at close range. Consider improved cylinder for small waters.

The only time a larger shot size may be in order would be gunning decoy-shy canvasbacks. I recently found that B or even BB shot can add great lethality at 40–45 yards (or meters). And, given the large size of canvasbacks, the shooter can get away with fewer pellets. 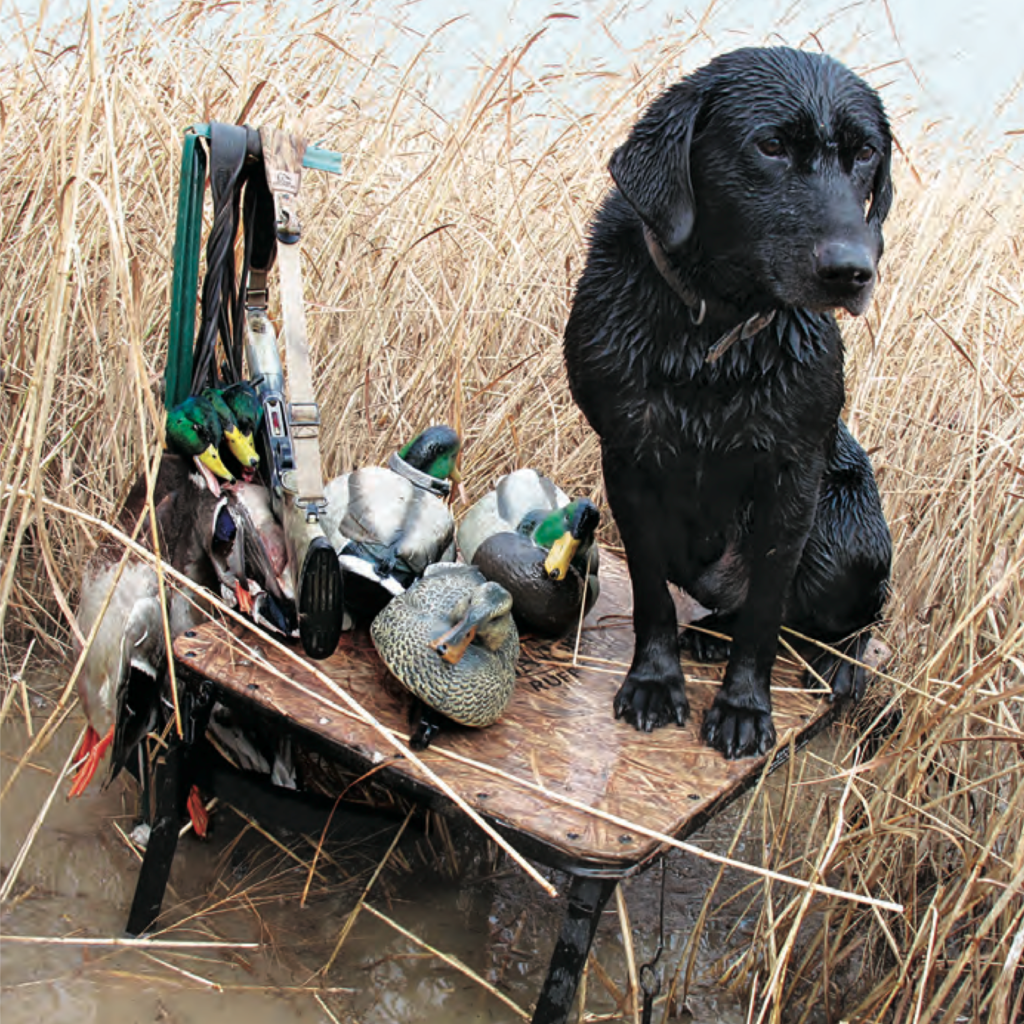 The Best Duck Hunt in America?

How you define America’s “best” duck hunt depends largely on personal taste. Arkansas is many hunters’ default answer, as it’s rich in duck-call history and offers uniquely thrilling, flooded-timber mallard hunts. Others propose the Texas Gulf, a major wintering area for scaup and redheads. Those who yet disagree may suggest the potholes of the Dakotas or Montana, an increasingly good opportunity for wigeon, gadwalls, mallards, and divers staging for migration. There’s even Alaska, which offers hunts for goldeneyes and harlequins on lakes nestled among coniferous forests.

I’ve been fortunate to hunt some of these destinations, and yet I find no greater thrill than hunting my home state of Pennsylvania. No, it’s no duck paradise, and the Atlantic Flyway is easily the poorest for dabblers. But that’s part of the fun. While I’m happy to return home with a duck in each hand, on those days when I beat the odds—such as when four friends and I shot 20 mallards on a central Pennsylvania creek—well, a more satisfying hunt does not exist. With proper perspective, no matter where you’re located, the “best” duck hunt may be found in your backyard.