Waterfowl Hunting: The Argument for Plan B

The Argentine sun gently bathes the wetland in soft, orange light, revealing quality waterfowl habitat in all directions, most of... 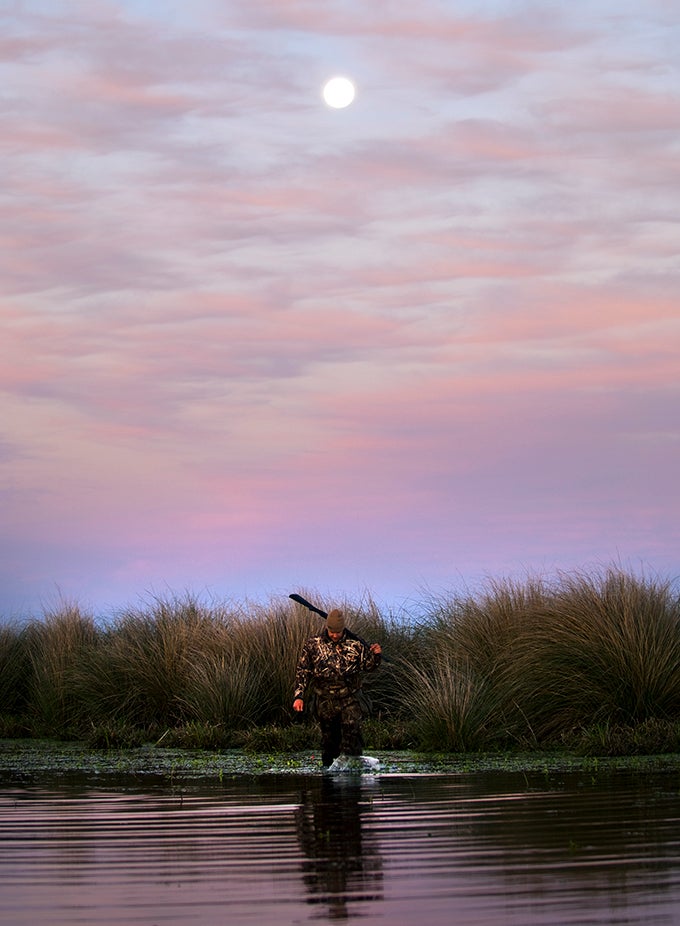 The Argentine sun gently bathes the wetland in soft, orange light, revealing quality waterfowl habitat in all directions, most of it full of birds: several thousand rosybill pochard, five species of colorful teal, white-cheeked and yellow-billed pintails, and red shovelers.

This is the real reason to visit Argentina—­for the unique and diverse species. But I’m also here for the country’s promise of high-volume shooting, which is why I am surprised when, on my first morning, I do not fire a single shell.

If the remainder of my hunt is to be salvaged it will require adjustment, and a reliance on a few waterfowl basics that don’t change according to hemisphere.

1. Find a Lee Shore. The greatest factor in the morning’s unraveling was substantial wind. My hosts for the hunt, Ramsey Russell of GetDucks.com and Terry Denmon of MOJO Outdoors, took three teal: cinnamon, Brazilian, and silver. With each shot, a vast assortment of distant ducks flushed and quickly re-sought refuge.

Wind is a crucial variable. Too little of it exposes the decoys as motionless frauds, too much and the ducks don’t fly. Confronted with the latter scenario, we hatch a plan to hunt the marsh’s protected lee shore that afternoon.

We construct a makeshift blind and position three MOJO mallards amidst rosybill decoys in a classic U formation.

2. Know Your Shotgun. The next morning reveals clear skies, gentle winds, and ducks in an endless bombardment. Yet it’s one of those days when a shotgun suddenly feels foreign in the hands. I strike out on the initial volley, and the next. I miss rosybills. I miss shovelers. I’m fairly certain I miss every species of teal. My guide, Diego, chuckles—and so do I. What else can we do? During a break in the action, I discuss my marksmanship with Denmon.

“The lodge’s Benellis have European stocks,” he notes. “There’s a lot less drop at heel. You have to really keep your head down.”

3. Trust Your Instincts. Winds are again fierce for my final afternoon outing, but Diego selects a sheltered half-acre pond. Ringed teal are on top of us from the moment the last decoy is placed. I press my cheek extra firmly to the stock and shoot the lead bird, then take another as they climb. I am myself again.

I’ve barely reloaded as four Brazilian teal lock up from the right. Again I take the lead drake, plus the one behind it.

I bag rosybills, three species of teal, and even a white-faced whistling duck. I shoot ducks until I don’t care to kill another, opting to watch them pitch to the blocks against the setting sun.

I look on as other hunters score. Work by Diego’s German shorthair changes my perception of the breed. Today is a taste of what’s expected in this country, made all the sweeter by the effort and adaptation required to bring the moment to bear.